Manatees Are Making A Comeback!
Odyssey

Manatees Are Making A Comeback!

Things are finally looking up for the formerly endangered species. 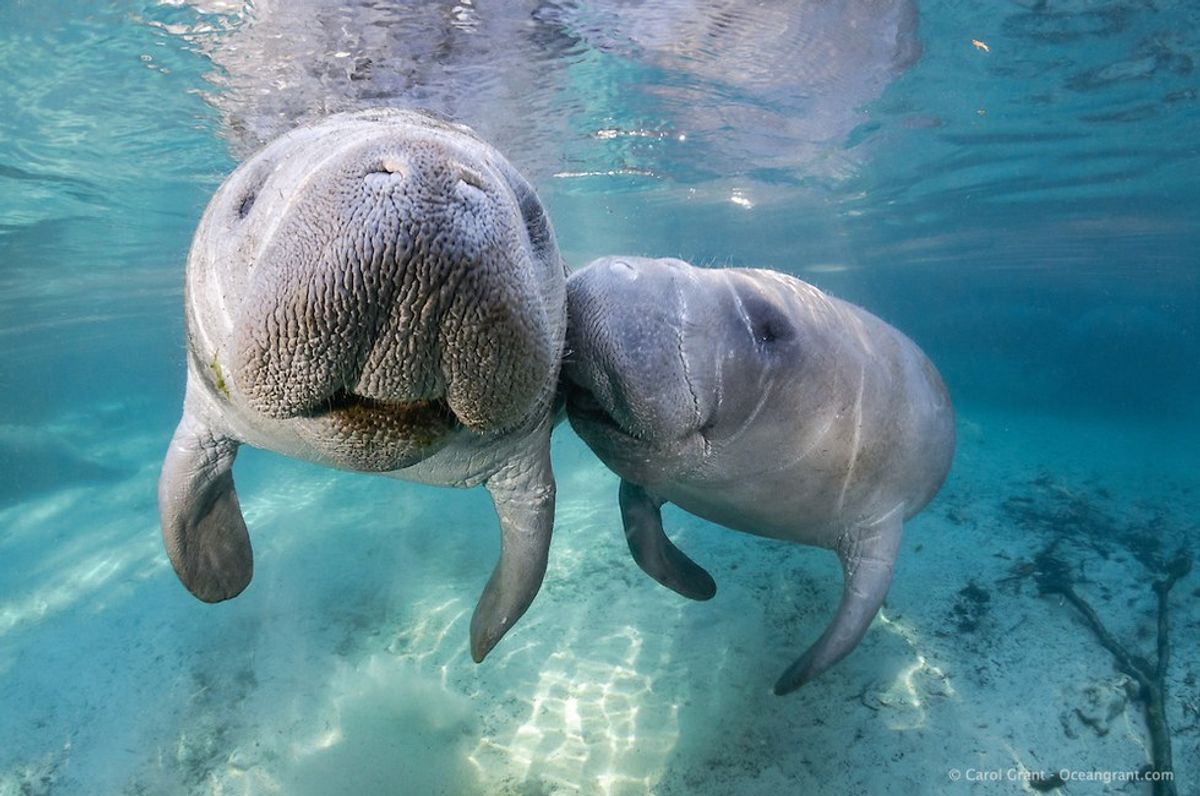 As a child, I remember taking a family vacation to Florida. One of the days we were in Orlando, we visited Sea World and the one thing that stuck out to me was the manatee exhibit, titled "Manatees: The Last Generation?" We crossed over a bridge where we could look over and see the majority of the manatees sunning themselves in the shallow water. We entered a large room with three giant screens taking up an entire wall. In this room, a short presentation was shown to us before we were lead to a room where we can watch the live manatees swim underwater. The montage described how drastically the manatee population was dwindling and warned us how close they are to becoming an extinct species. It urged us to help out in saving the manatees before it was too late. I walked out of the exhibit with the lingering thought of what would happen if these poor mammals did wind up extinct. Was there really a chance that the manatees couldn't be saved?

It has been over a decade since I learned about the manatees at Sea World, and the efforts made to save this species were not made in vain. In January, 2016, The United States Fish and Wildlife Service officially proposed to change the West Indian Manatee's status from "endangered" to "threatened" under the Endangered Species Act. The Florida Manatee, one of the two sub-species of the West Indian manatee, had an estimated population of 1,267 in 1991. This was an alarmingly low number that inspired many of the conservation movements that are still active today.

The map pictured below gives a rough image of the areas the West Indian manatees inhabit.

Let me tell you briefly how awesome manatees are...

Commonly nicknamed the "sea cow," the West Indian manatee is an aquatic herbivore that is able to live in both fresh and saltwater. Manatees not only live in the Atlantic Ocean, but they usually live in freshwater rivers, bays, lagoons, and estuaries. Even though they live in the water, they must come up for air in four- to six-minute intervals. They can measure as long as 13 feet long and weigh up to 3,500 lbs. Their thick, rough, wrinkled skin can be grayish-brown in color and typically have algae growth distributed on their entire bodies due to their inactivity and\or slow movement in the water. Manatees do have hair that is scattered all over their bodies. Like how cats have whiskers to help them detect movement in the dark, manatee hair acts as a sensory mechanism; they use their hair to feel and identify what is in and around their environment.

What I find fascinating about their anatomy is that they do not have a neck, so they have to turn their entire bodies in the direction they want to look\go in. The gestation period for a West Indian manatee usually lasts 12-14 months and they can only produce one calf per birth, thus making the reproduction process slow. Although they have rather large physiques, they're actually the most non-threatening and docile mammal you could encounter. In other words, they are "gentle giants", and in my opinion, they are absolutely adorable. How can you not like that mushy face?

If these mammals are so cute and in no way harmful to any other animal, why were they on the brink of extinction?

There are many different reasons why, but unfortunately, the West Indian manatees were mostly dying in the hands of humans. Manatees have no natural predators, and it is very rare for a manatee to get attacked by any kind of animal. Manatees were frequently hunted in the past by humans for their bulky skin, meat, and fat. Thankfully, it is illegal to hunt manatees and poaching is highly frowned upon (remember how Cecil the Lion was killed by an American poacher? His death brought attention to poaching and caused a national outcry).

Motorboat collisions involving manatees play a huge role in the decline of the manatee population. A large portion of manatee deaths occur when a motorboat strikes the mammal in it's environment and\or with fatal cuts and scrapes caused by the boat's powerful propellers. These injuries could kill a manatee instantly, or the poor animal could suffer from internal\external trauma for an extended period of time before succumbing to death. Because of the rising number of fatal motor boating accidents involving manatees, efforts have been made to try to protect and prevent any future injuries within the manatee population. For example, cautionary signs have been posted in Florida in various areas where the manatee population is well known.

Of course, there are natural causes of deaths; manatees are prone to get cold-related diseases, such as hypothermia, so they must live in water temperatures warmer than 68 degrees Fahrenheit. The exposure of red tide is also a non-human related cause of deaths for the manatees.

With the legal protection and the conservation efforts made by numerous wildlife organizations, the West Indian manatee's population rose to over 6,300, which is a 500 percent increase within the state of Florida! Even with their record breaking numbers, the manatees are still fighting for their lives and still need our support. Hopefully, this will not be the last time manatees will positively make headlines. I hope to live to the day where manatees are not even classified as "threatened." Let's keep respecting and coexisting with the manatees so they can take full advantage of their lives.
Report this Content
This article has not been reviewed by Odyssey HQ and solely reflects the ideas and opinions of the creator.