How I created a rough geological reference for world building - and you can too!

When I read A Song of Ice and Fire for the first time, my friend insisted that I let him loan me a poster-sized map of Westeros so I would have an adequate reference as I made my way through the series.

"Oh, you don't have to give this to me," I told him. "I almost never look at the maps in books anyway."

He was horrified. "But how do you know where all the characters are in relation to each other? What direction they're moving in?" I didn't really have a good answer to that; I had always been content to assume the authors of the books I read knew what they were doing and never bothered to develop a good sense of fictional spatial awareness.

However, now that I am planning to write a book myself, I want to start by making a very crude version of those maps I long ignored. In doing this, I hope to give myself an idea of how the cultures I create might arise based on the contours of the landscape and to ensure that I don't write my protagonists into a surreal, Escher-like setting in which distance has no meaning and the dynamics of travel and trade make little to no sense (although, on second thought, that might be an interesting premise for a novel in and of itself.)

After perusing the web for advice on mapmaking, I decided to draw a rough draft myself based on the guidelines set forth by Mythcreants, as it seemed to fit in best with my philosophy of starting with the structure of a world that made geological sense before filling it in naturally with the components I need for my final narrative.

As is my wont, I decided to take their logic of "drawing mountains first" one step further and instead sketched out (with an admittedly rudimentary knowledge of geology) the boundaries of where I wanted each of my tectonic plates to be. 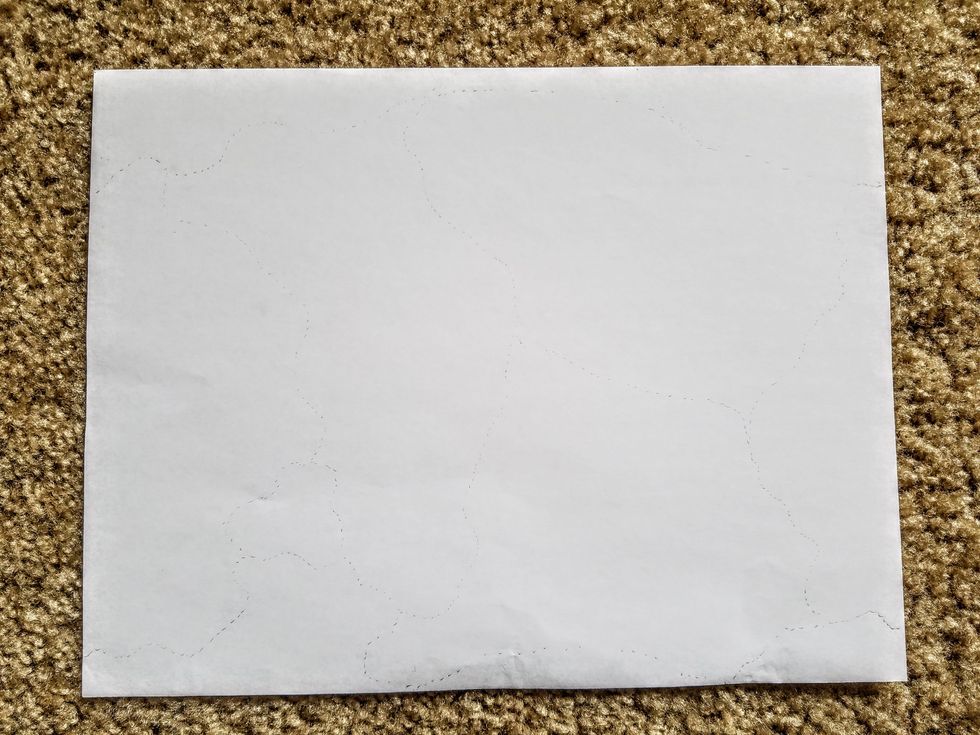 Then, I decided on the rough direction each would move in (trying to keep in mind that I was plotting out a round world on a flat surface), drawing arrows to determine how and in what ways the plates would collide. I labelled each boundary with the type (i.e. convergent, divergent, etc.) that could be expected of it based on where I wanted my oceans and landmasses to be, thinking that would allow me to create corresponding geologic features reasonable accuracy. 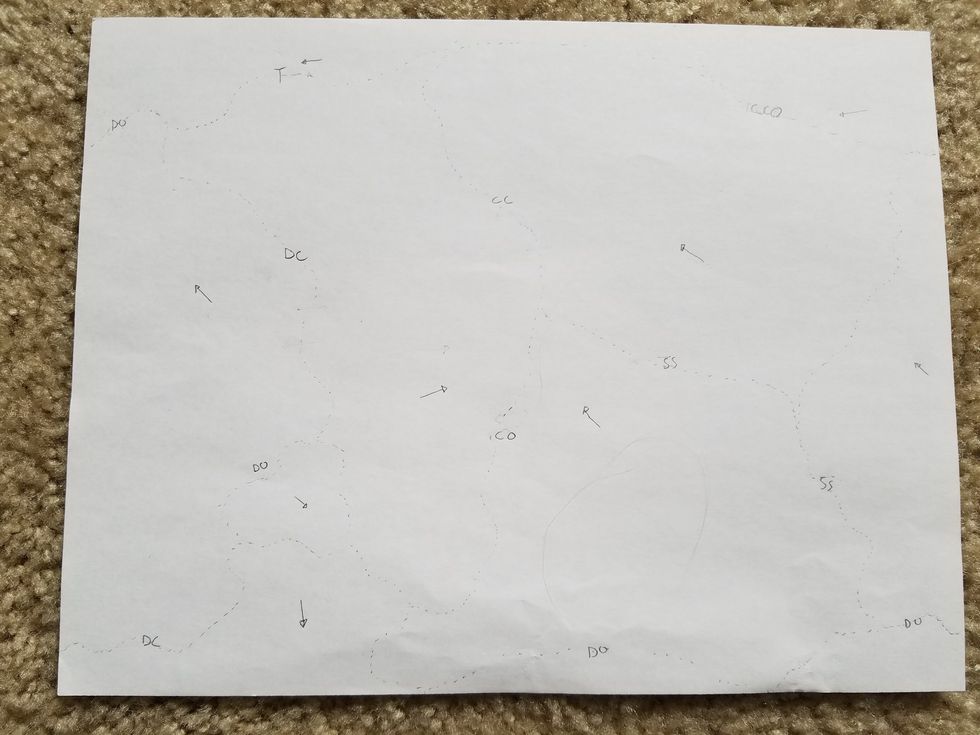 I followed this up by finally adding mountains to my map where continental plates met based on the rules I'd outlined on my initial drawing, spicing things up with an independent volcano and an impact crater here and there where I felt they might be useful. 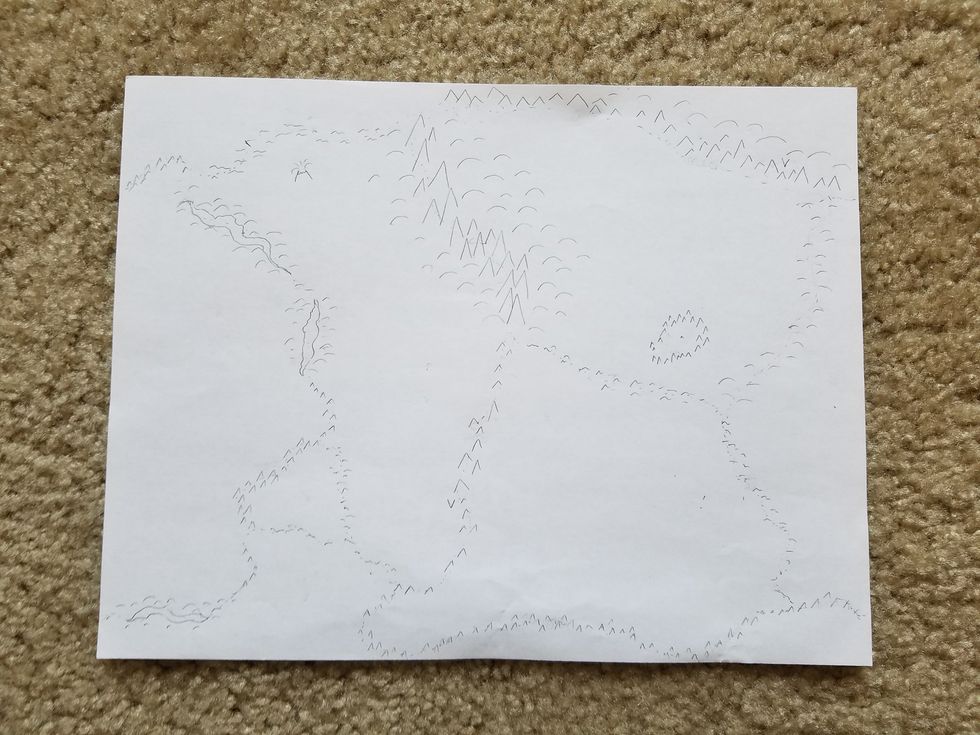 Next, I added coastlines and erased most of my reference lines for tectonic plates. I also added a few islands where there had been geological activity in the ocean. To the best of my ability, I stuck to the general rule of developing jagged rather than smooth boundaries between land and sea. 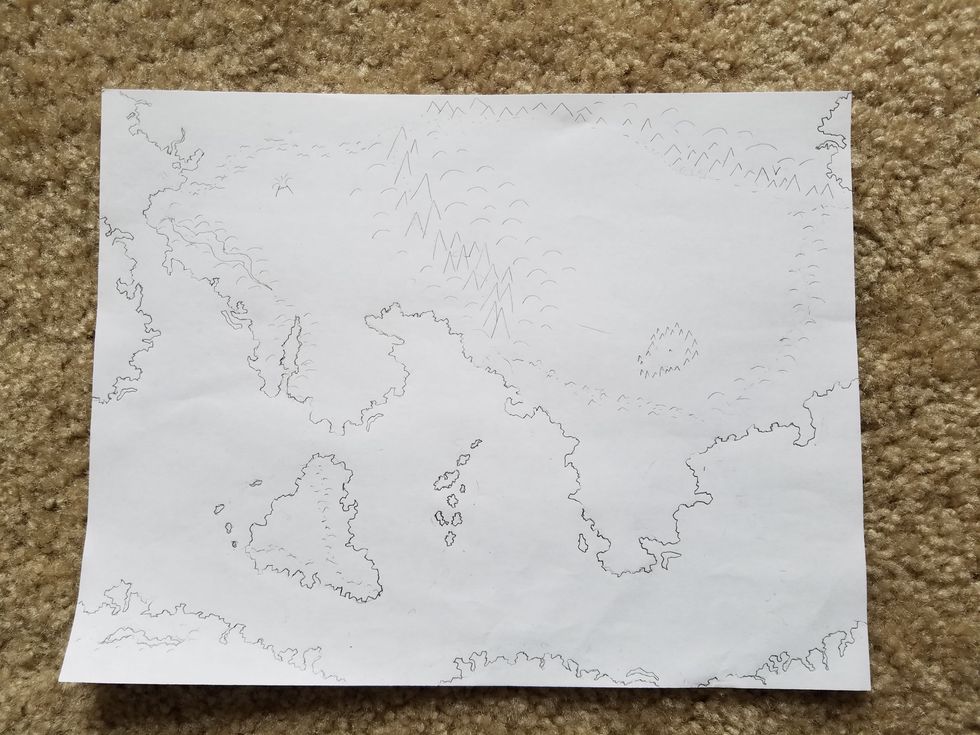 Rivers and lakes came next, largely based on where I had placed mountains and hills earlier in the drawing process. At this point in particular, I felt that I was encountering obstacles in the scaling of the map. I had originally intended to construct my landmasses on a global scale, but both my mountains and waterways ended up unrealistically large. Since this was only meant to be a rough draft to reference when writing, however, I felt such inconsistencies could be tolerated. 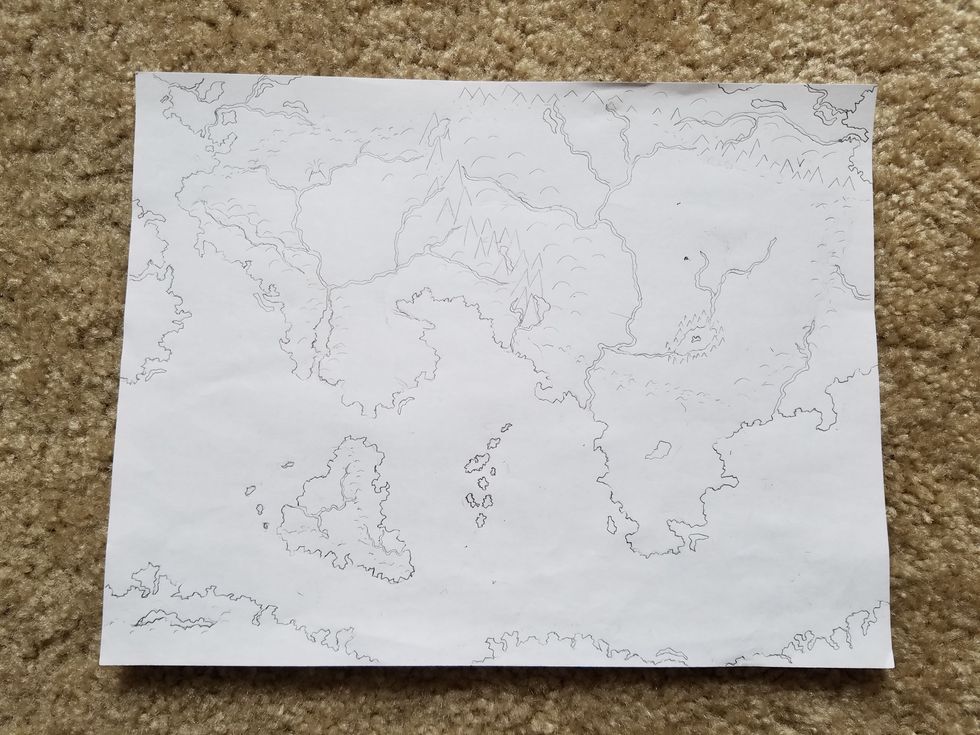 With these basic features established, I used Mythcreants' latitude guidelines (albeit somewhat loosely) to detail my landscapes. I know that once I start writing I will probably want to experiment with more diverse environments than "forest", "desert", etc., but at least now that I have them on my map, I will be able to infer where additional features may arise based on the current physical makeup of my fictional continent. 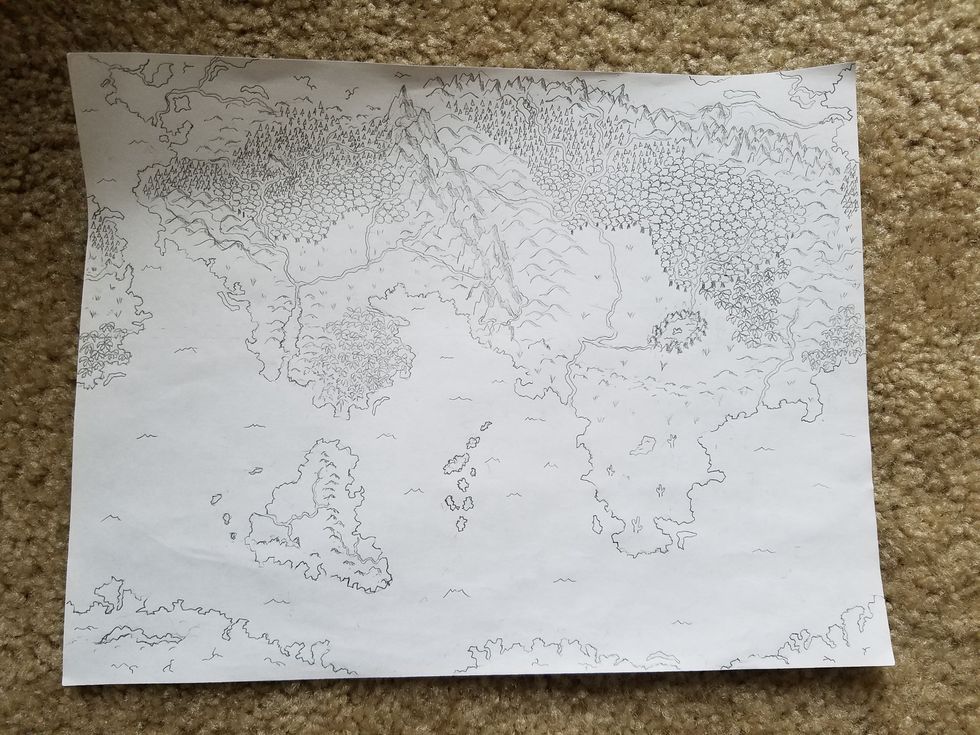 Finally, I inked in what I had drawn and declared the project finished until I could return to my dorm to pick up the colored pencils I'd left in my haste to get home amidst COVID-19 closings. 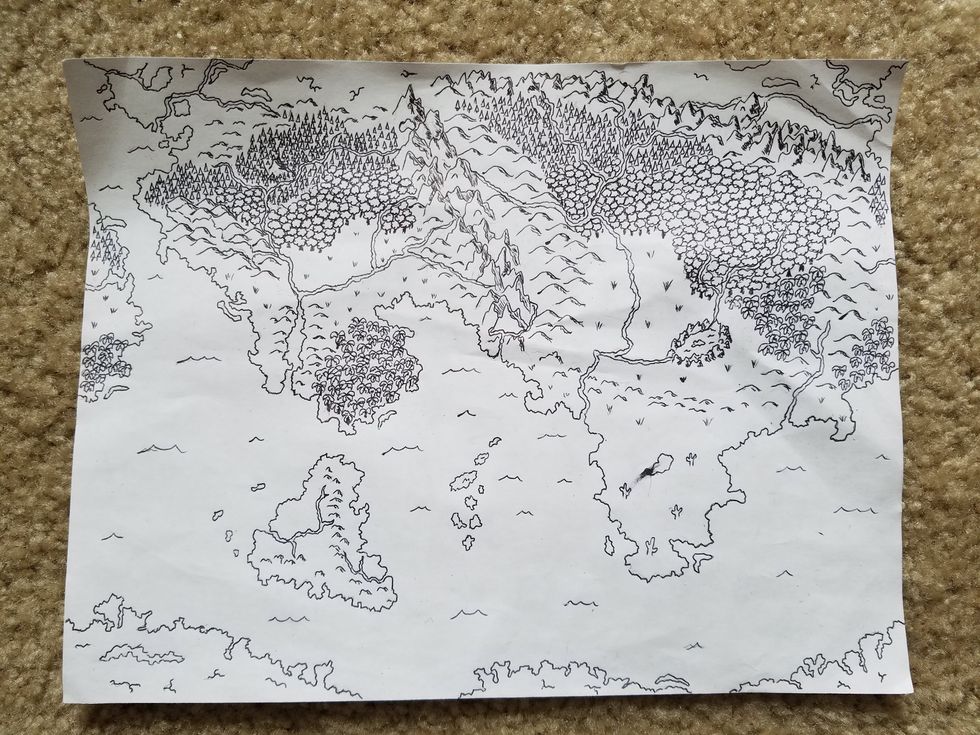 "Wait," you may be thinking. "Where are all the cities? The roads? The infrastructure your civilization has presumably created?" All in good time - I plan to develop those on a separate map as I sketch out a rough history of events in hopes that will help such features will develop more organically. The wisdom of such a strategy remains to be seen, but I hope that documenting this process might inspire other aspiring writers to use this time for similar creative endeavors.

For those of you who (like me) are not particularly artistically inclined and would prefer to do this work through a different platform, there exist several virtual map-making programs that will give you far more aesthetically pleasing results. However, I felt that there was something intimate about sketching out the map on paper and am satisfied with having gained a much more visceral grasp on the setting that I want to write a narrative in.