Locked, Loaded, And Ready For Inspiration

Why I'm actually that dork who keeps a pen behind his ear. 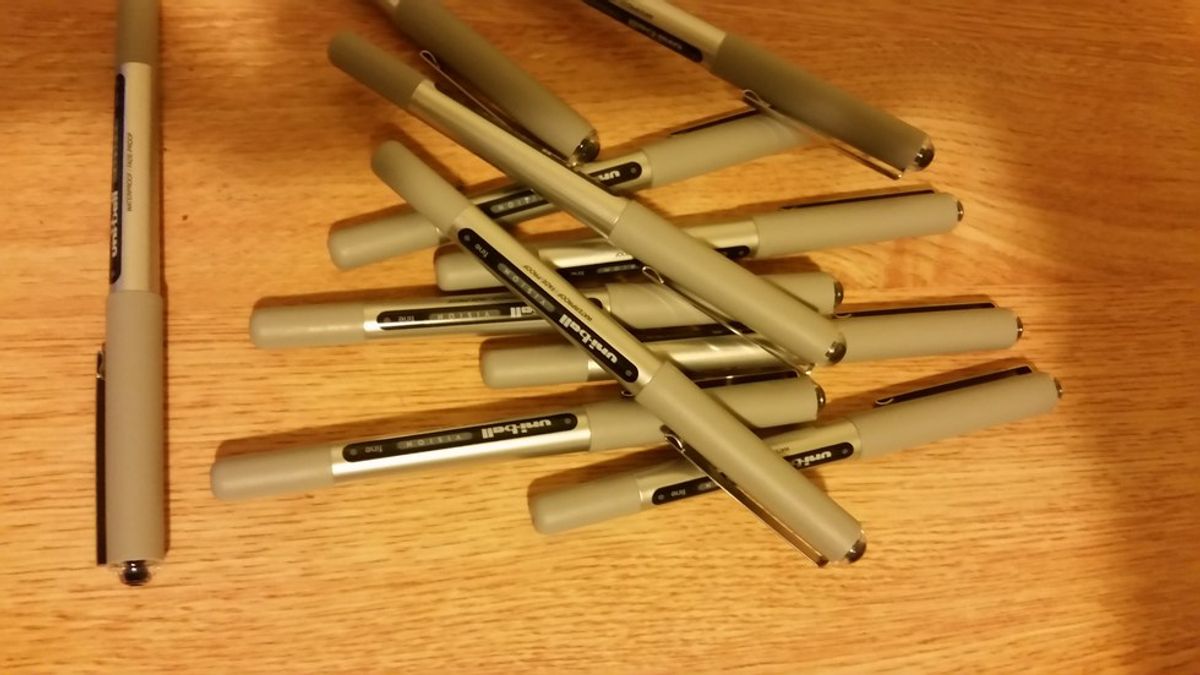 You’ve got to be smart when heading off into the fray. Yeah, your brain’s useful and all, but sometimes you need a little something extra: supplementary tool to get you through the day. Your road is dark and treacherous; danger lurks in unexpected places. What can you possibly rely on to get you from point A to point B?

A black, 0.7 millimeter, fine tipped, UniBall Vision, to be specific.

I try to keep one on my person at all times, usually tucked behind my left ear. Yeah, I’m one of “those people” who thinks they look smart with a pen behind their ear. Contrary to popular belief, this pen has perks beyond the oh-so-lovely pseudo-intellectual aesthetic.

I’m one of those nutters who’s always having random ideas popping into his head. They tend to arrive somewhat randomly, and usually at inconvenient times. Dependably having a pen on me helps keep me from losing ideas. The 0.7 millimeter fine tip is thin enough that I can make quick notes in small spaces, but thick enough that it can effectively write on napkins or skin if there’s no paper at hand. Additionally, the UniBall ink is quite water resistant, so jottings aren’t lost on the first washing of the hands. My darling little ear pen has saved many a story, several poems, a D&D campaign, and a couple comedy bits. Of course, most of these ideas were crappy, but every now and then I manage to eke out a gem.

I also don’t have to switch things around when taking down information while on the phone. You needn’t pause, switch to speaker, and change apps when you’ve got a pen at the ready. You can just get right to jotting!

An easy-access pen also comes in handy for quick grocery-store calculations. When you’re working with a lot of numbers, it’s helpful to write things down. This way, you can make sure that you’re including every item and documenting the correct price. My pen has (on multiple occasions) saved me from checkout embarrassment.

Sometimes my wants and needs are very base, and there’s a layer of plastic between me and my food. Yes, friends. When I’m in a pinch, I use my pen to stab things. It’s crude, it looks dumb, but dammit, it’s effective.

I suppose this could also work in a defense scenario, but I strongly doubt that the literal pen is literally mightier than the literal sword. For the sake of my own safety (and the safety of everyone around me) pen-stabbing is limited to cling wrap. Sorry, Christopher Nolan fans; I don’t make writing implements disappear.

All reasoning aside, this article is a half-baked justification for a less-than-trendy “fashion” statement. Practical as pens are, I’m just another nerd trying to defend his socially divergent (and dorky looking) behaviors.

But maybe it won’t be socially divergent for long?

For the time being, I remain indePENdent.

Caitlin Marie Grimes
University of South Florida
9469
Beyond The States