To The Jim Halperts Of The World, Here Are 9 Reasons You Can't Shame Me Out Of Thinking 'Legally Blonde' Is A Fantastic Movie

Whoever said orange is the new pink was seriously disturbed. 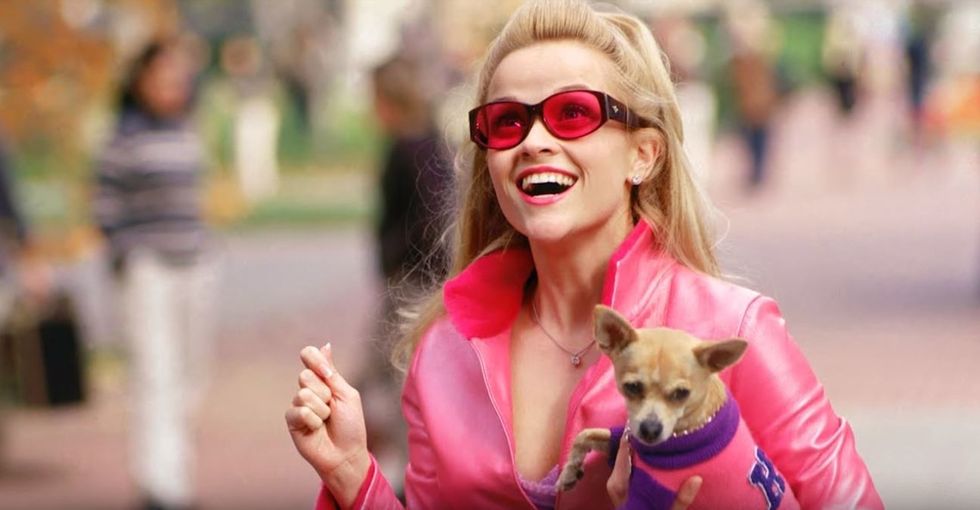 "Legally Blonde" is one of my mom's favorite movies, so I grew up watching it. I loved it. There was something about charming Elle proving the world wrong that inspired me. It was the perfect complement to "Miss Congeniality," one of my other favorites that I would watch over and over again.

It wasn't until watching an episode of "The Office" that I began to question my preference of Elle Woods.

When a fire kicks our beloved office squad out of their building in the season 2 episode "The Fire," they're forced to stay in the parking lot and play psychologically revealing games like "Would You Rather..." and "Desert Island."

As Pam starts to admit to liking "Legally Blonde" and wanting to potentially choose it as one of her three desert island movies, Jim cuts her off:

Wait, wait, wait. Pam, no. Do you understand? The game is desert island movies, not guilty pleasure movies. Desert island movies are the movies you're gonna watch for the rest of your life! Forever! Unforgivable.

After his explanation, she rescinds her answer and later gives a Top 5 Films list that's more Jim-worthy.

Because I'm foolish and weak and let even fictional characters' opinions deter me from liking something, I didn't view "Legally Blonde" as something that was all that great for some time.

I let some (fictional) guy poking fun at women's interests keep me from loving something that I had always loved.

So this is for all you Jim Halperts out there. "Legally Blonde" is not a guilty pleasure movie—it's a desert island movie. Here's 9 reasons why.

1. Early on in the film, Elle's motivation switches from being for a guy to being for herself.

She originally worked so hard to be able to attend Harvard with the sole purpose of proving she was serious enough to be Warner's wife. When she realizes that he'll never view her as good enough about 40 minutes in, she switches gears. She buys a laptop and answers the tough questions in class, even showing him up in class. My queen.

It shows that you can't be the best and flourish if you're doing something just to get a guy. You have to do it for yourself, to prove to yourself that you're smart and capable.

Nothing will ever top this absolutely iconic line.

It's not only a great clapback, but it perfectly embodies Elle's attitude. She'll work hard and then play it off like it's nothing, just to upset her competition. I stan a legend.

3. Elle and Vivian start out as enemies, fighting over a guy, but eventually become best friends despite him.

This movie takes the obnoxious cliche of pitting women against each other over male attention and turns it on its head. These two "enemies" instead become best friends, bonding over how hopeless said guy is. But the ice between the two really starts to melt when they begin complimenting each other, and I am here for it.

We see this with Elle and her two best friends back in L.A., Margot and Serena. Though initially skeptical of Elle going to Harvard, by the end of the conversation, these two are in full support. They and the entire sorority house help Elle study and prepare for Harvard and celebrate with her when her hard work pays off.

Then, when Elle feels devastated and lonely out in Massachusetts, she finds a friend in Paulette, the lady who does her nails. Elle helps her gain confidence to take back her dog from her loser ex and to talk to the cute UPS guy. Paulette, in turn, constantly encourages and compliments her.

Elle supports Brooke Taylor-Windham, the defendant, in a way that only another similar woman truly can. She and Vivian become best friends by the end of law school. And, in one of the most important moments of the film that I think truly drives home the message of women supporting women, the professor we've all assumed to be the worst turns out to be the only one who truly believes in Elle, and it encourages Elle enough in her moment of doubting to go back to lawyering (that's a thing, right?).

Just. The power of female friendships, y'all.

5. The man who uses his position of power for sexual harassment gets punished and it's glorious.

We're used to corrupt men using their power (physical, social, etc.) to sexually harass or assault people, and we're especially used to them getting away with it.

"Legally Blonde" holds him accountable and strips him of his position (at least for that particular situation) and it's incredible. More of this in films and TV and real life, please!

6. Elle wins the case using her traditionally feminine knowledge—which is what kept most people from believing in her.

Her knowledge of hair care blows the case wide open and leaves everyone shook. Though her love of the color pink and all things "girly" is what kept most people from taking her seriously, in the end, it's what wins the case.

Elle Woods is the ultimate people-person we all try to emulate in social situations, let's be real. She's charming and sweet and always wins people over. Always. And it's because of her confidence.

It's that same confidence that causes her to rock the bunny costume. When tricked into showing up to a party with fellow law students in costume, Elle decides to own it. She puts on a brave face and a smile and struts inside. When will your fave ever?

It's how she's able to just decide to go to law school. She works hard, applies without any backups, and just shows up and fricking does it, graduating as Valedictorian. We can all learn from Elle's confidence. (Could you imagine if we all had just an ounce of her confidence? We would be too powerful.)

8. Elle and Emmett's relationship is based on mutual respect and support.

Instead of putting the two of them in sexually charged situations where they're constantly flirting and making innuendos before they finally hook up, Elle and Emmett's relationship starts through support.

He gives her advice about professors and how to win them over the first time they meet, and later, instead of telling her she should give Calahan Brooke's alibi, he's able to be honest about his opinion of Brooke, and the two amicably disagree. He's the only one to believe in her when she says Enrique is gay and proves her right, has her back and defends her when Vivian accuses her of sleeping her way to the top, and keeps encouraging and supporting her as she takes over as lead on the case.

And they still flirt a bit! They're cute and sweet and goals in every way.

9. The whole message is that women don't have to sacrifice an ounce of their femininity in order to succeed in a male-dominated profession.

Elle is the same character at the beginning as she is at the end—except with more confidence and a law degree. But she has that trademark Elle Woods confidence and femininity, proving that women don't have to sacrifice what they like if it's traditionally feminine in order to do well in a profession with other men. Instead of letting people look down on her and try to mold her to be a specific type that is more masculine and less vibrant, Elle stays true to herself and her interests. And she succeeds.

To be fair, this movie does have its downsides—namely, its lack of diversity. But it also has a lot of positives, and I won't be shamed into not liking it.