The second book to "The Kissing Booth" universe was released yesterday and it was definitely a rollercoaster of emotions. 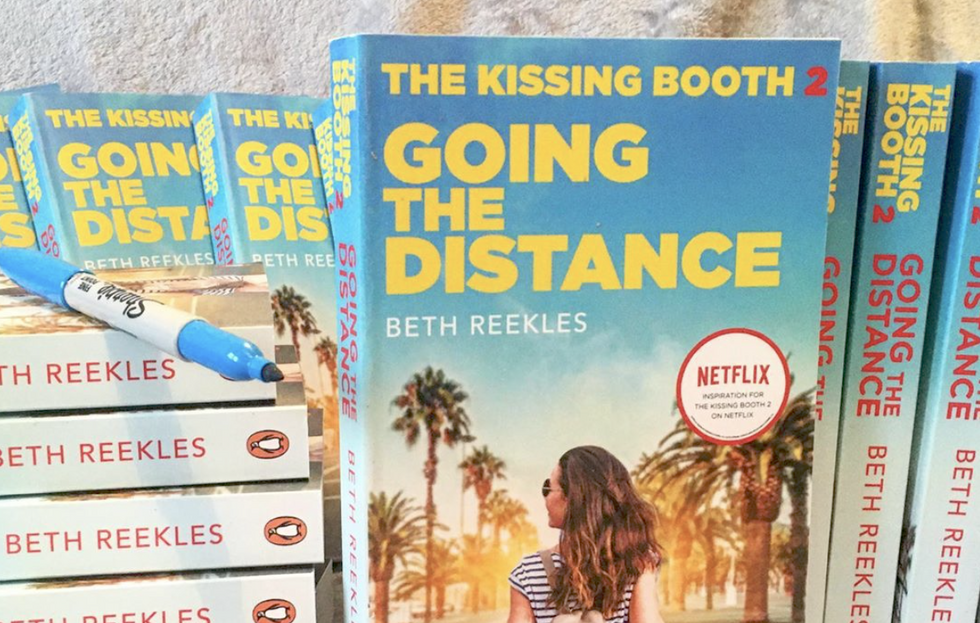 The teen rom-com phenomenon that is The Kissing Booth swept across the world in May 2018, when the movie premiered on Netflix. It was received fairly well on the streaming site, with the company stating that "every one in three viewers of the film have re-watched it, which is 30% higher than the average movie re-watch rate on Netflix." It has received some backlash from other critics and media outlets, but there's something about the storyline Netflix-users just can't get enough of - seeing as how it was one of the most-watched Netflix movies of 2018.

However, what most people don't know is that The Kissing Booth began in 2010 as a Wattpad story. Wattpad is a website where millions of users can type, upload, and publish their own stories for people to read at the click of a button. It has come to be known for housing a lot of fan fiction stories, but TKB was an original storyline from then fifteen-year-old Beth Reekles.

Set in California, the first novel follows two best friends named Lee Flynn and Elle Evans. They have been inseparable since birth, seeing as their mothers were old college buddies. Because of this, they've had sixteen years to develop a list of "friendship rules."

Some of the rules include:

1. No matter how mad you are, you have to forgive your best friend if they give you ice cream.

3. Always be happy for your bestie's successes.

And there are plenty more. But the most important rule?

The relatives of your best friend are totally OFF LIMITS.

This is a really important rule for Lee because his older brother, Noah, is basically a legend at their high school. Only a year older than Lee and Elle, Noah is the resident bad boy who gets in fights, plays football like a god, and gets all the girls. And Elle's had a crush on him since they were all kids, but the rules are the rules, right?

When Noah starts to show interest, Elle has to decide if she's willing to break the rules for him or stick by her best friend. And it doesn't help that she's choosing between brothers. There's certainly tons of drama and the title is The Kissing Booth, so you know there's a romance of some kind.

The premise of the first book and movie follows Elle as she begins a secret relationship with Noah Flynn. This is one of the more cliche parts of the novel because Noah doesn't typically date, he hooks up, although he tells Elle she's different than other girls. Thank God he holds to his word and their relationship is the real deal, but it's officially 2020 and that "classic" line is a tad sickening, to say the least. Noah and Elle are super adorable, but I can assure that stuff goes down and Lee definitely finds out. Elle seems to have lost her best friend and her boyfriend at the same time but the narrative is wrapped up in a neat if bittersweet bow. Elle and Lee make-up, Elle and Noah start officially dating in public, and Noah moves across the country to attend college at Harvard University. (Yes, the bad boy is actually a closet genius with a 4.7 GPA)

But you didn't click on this article to rehash the first book!

The second book was literally *just* released in the U.S. yesterday (1/7/2020) and I made sure to pick up a copy first thing. Note: Checking Barnes & Noble's availability list prior to picking up a new release is a really good idea. Luckily, I got my copy and immediately raced home to marathon it, as it was a fairly short read at only 326 pages and read like a "beach read." It literally took me a few hours (with a couple of short breaks) but I was able to read the entire thing in less than a day.

It picks up when Lee and Elle are beginning their senior year of high school.

And things have certainly changed.

Elle feels like a third wheel as things between Lee and his girlfriend, Rachel, are amping up; Noah is thousands of miles away and Elle is having to adjust to trying to make long-distance work; a new boy moved to town and has started integrating into Lee and Elle's friend group at school...

The biggest change in the novel focuses on Noah being so far away at college, as the story is told from Elle's perspective. And it all flips upside down when Noah is seen in multiple photos online with another girl kissing him on the cheek at a party. However, I digress, spoilers for this installment will be in short supply from me! You'll have to read to find out what all goes down! But I can tell you it's certainly an eventful time!

My take on the second book was honestly even better than the first. I can definitely see Reekles has matured as a writer since initially starting the process of TKB and this novel was much-anticipated! I rated it five stars on Goodreads simply because reading it made me laugh, cry, get frustrated, and so on. It carried me through almost any emotion you can think of and I honestly spent most of my reading time just wishing I was in the book so I could knock some sense into all of the characters. However, if there's one thing I have to say before the second movie premieres on Netflix sometime this year, it's that this read/story arc is so satisfying and relieving, even if it didn't go exactly the way I originally thought it would.

Millions have been pining over the next installment of the story since it shot to fame with the 2018 release of the first movie. And Reekles certainly didn't disappoint! Here's to hoping the second movie is able to do the same and praying that the official release date comes out soon!

To The Guy Who Left Me, Thank You For Bringing Me One Step Closer To Finding Myself