UK student Khari Gardner refuses to back down. 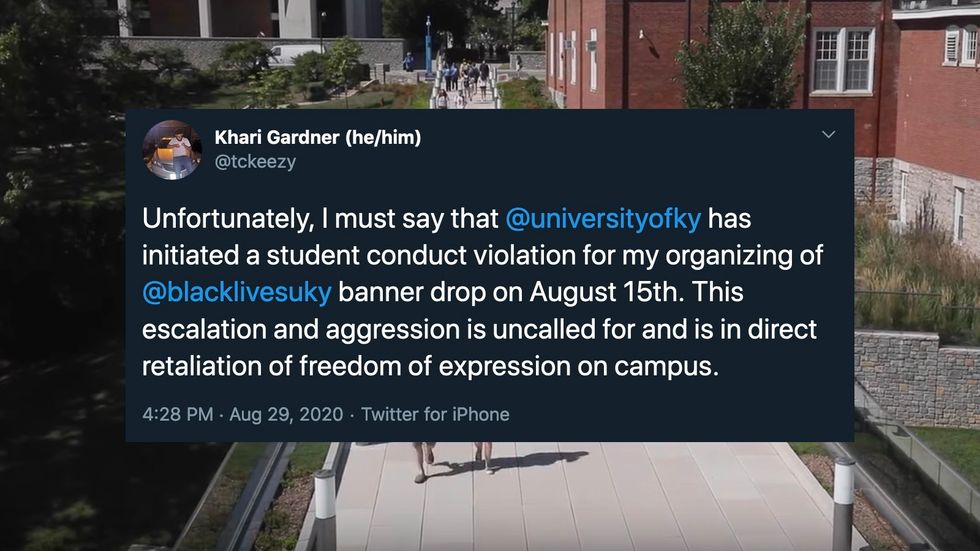 At the start of the semester at the University of Kentucky, students were welcomed back by signs placed around campus, but these were no regular welcome signs or reminders to maintain guidelines during the COVID-19 pandemic. Rather, they seemed to be bed sheets spray painted with quotes, stories of students who have faced racial discrimination at UK.

The organization, Black at UKY, was founded by UK senior Khari Gardner, and he's the student who posted the signs around campus as a way of speaking out against the tolerance of racial discrimination at the school.

The signs were taken down by UKPD within mere hours for violating the campus signage policy, and Gardner said he felt that the University of Kentucky was trying to silence the voices of those who chose to speak out, but he did expect them to be taken down fairly quickly.

Gardner heard nothing more about it, until two weeks after the semester began when he said he received a letter from the university, stating that he had received a conduct violation, citing specifically that he breached the University Events Signage policy, which prohibits signs from being hung from campus buildings. The letter continued that he would have to report for a conduct meeting the following Wednesday, September 2.

Gardner told local news channel LEX18 that he was not scared for the meeting, and that he felt it was obvious the university was using this as a way to retaliate against his organization and its purpose. He said that this attempt by the University of Kentucky will not stop him from continuing to speak out and fight for the cause.

Gardner has since met with the university regarding his violation, and he took to Twitter to say that he felt the meeting was productive.

The Twitter thread continued to say, "We (@blacklivesuky) will still continue to push forward lasting and effective initiatives and changes to every aspect of campus and our community. I want the next person to step foot on campus' next 4 years to be a better experience than my last 4 years."

He thanked the community for their outreach and support, and reminded them that he nearly left the university community before because of how people made him feel, but that this has helped him feel like he's really found his second home.

Khari, don't let the university sway you from speaking out.

So many of us within the community are wholeheartedly supporting you. Thank you so much for being so brave and making the incredible efforts to really make this campus more just and equitable. Fight on.