Austen's contribution and influence to society and literature exists and thrives to this day. 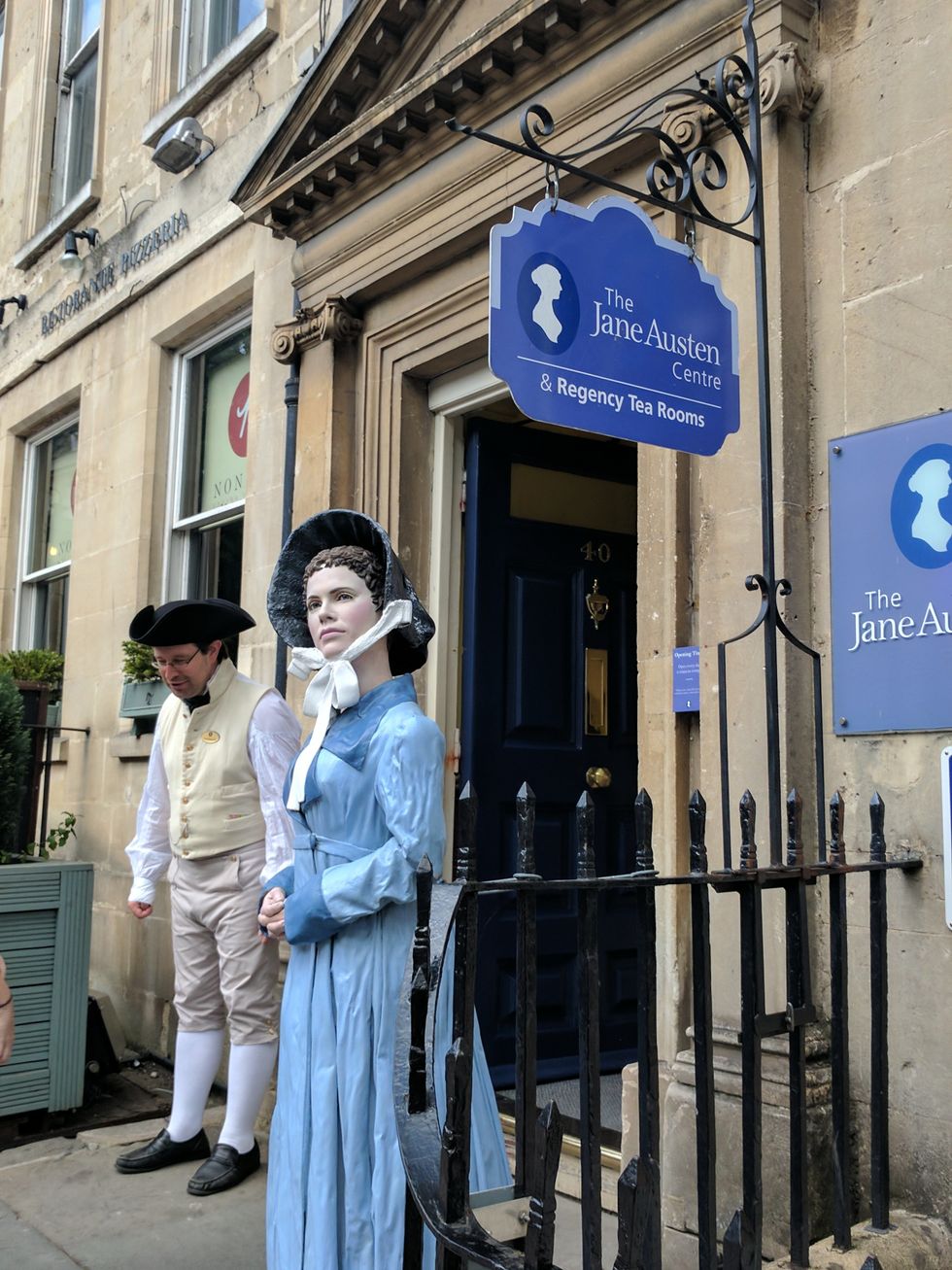 Born to a family of eight children in an average family of moderate means, Jane Austen had the true potential to be perfectly ordinary. A history-altering spark within her, however, allowed her to become one of the most recognizable and respected writers in the English language.

I felt that spark when I visited the Jane Austen Centre (pictured above) in the city of Bath in the UK. Surrounded by her stories, characters, and the world of the Victorian lady was strangely fulfilling as I got to know Jane better than I had ever before.

Obviously the literature that Austen wrote still has a profound impact on the lives of literary enthusiasts and scholars globally. Pride and Prejudice is a household name, and countless high schools and universities feature her novels as part of curriculum. Austen's books have been essentially deemed required reading to gain appreciation and understanding of the history of English literature and culture.

However, Jane Austen was much more than her books which, more often than should they should be, are considered overrated and possibly boring, primarily because of their nature as classics. Frankly, the dismissal could also originate from the subject matter which includes high society etiquette, complex and controversial female relationships and self-reflection, and romance. As the canonical importance and filing of literature has been reserved to those of the highest privilege (not far from those with the most privilege today) its no wonder that these subjects have been considered "unworthy." Until recently, that is.

1. She trolled the entirety of England at age 15.

When Jane was 15, she wrote a burlesque chronicling the English crown and how many times it has changed hands, those who have sat on the throne, and their significance to British history. What's brilliant is that she spends the entirety of the pocket-sized piece poking fun at textbooks and how they portray the monarchy.

The title says it all: both imitating a serious title of maybe another famous textbook, but also exposing historians for the biases they so clearly have while writing these works. However, my favorite. favorite part is, "There will be very few Dates in this History." I mean she really goes for it. Her "history" even references plays, such as Shakespeare's, as sources for her non-fiction.

Austen's badassery is rarely explored by scholars and in conversations about her work so read this to have your mind blown.

Lizzy Bennet, 'the rational heroine," and Catherine Morland, 'the unlikely heroine,' are beloved characters who have taken ahold of the hearts of readers since their respective novels first came out. However, they are far from perfect and it is that imperfection that draws people in as they become more intimately acquainted with Austen's characters.

It could have been enough, to make a fascinating and scandalous story about Victorian high society, to have one-dimensional characters to make fun of it all. However, Austen's magic comes through in the form of her complex female characters who are neither statically "strong,' nor superficially ditsy. The women have purposes beyond serving the plot or the heterosexual men of the plot.

Of the most significance, is Austen's proclivity for female protagonists who embark on a journey of self-actualization during which they learn that they are indebted to themselves to develop as people rather than to the society surrounding them.

Along with the importance of the female characters in Austen's masterpieces, there is a recognition of the trials and benefits of Victorian society. Austen, herself, was a product of the society that she frequently wrote about as she also experienced initiation into high society and the pressures of ladylike behavior and expectations.

4. She was a self-made writer.

Jane Austen did much more than just write stories in the hopes that they made be one day read. She was her own editor and publicist as she produced piece after piece. She literally wrote until her end, finishing with Persuasion on her deathbed, and worked to find her own publisher throughout her life.

When Sense and Sensibility was published, it sold out copies within two years of the start of production. Her books sold well, and she received praise and criticism for her work. Throughout it all, she remained independent and single as she supported herself through her writing.

5. She wrote timeless stories and characters.

Austen had the choice, because of her experience with men in her own life and the standards of the classes, to write dark, cynical literature without a fragment of hope for women and societal change. And yet, she wrote bright, optimistic stories laden with redeemable characters and the potential for change. Her writing remains timeless, not because of her 19th-century references, but because she filled her books with hope.

She also wasn't afraid to truly love herself in the process, as one of the most beloved and kind characters that Elizabeth Bennet (one of the most famous literary characters) practically worships Austen writes is named Jane.

6. She could have been ordinary.

As I said before, with her family background and being born seventh of eight children, Jane Austen had the very real chance of being a nobody as compared to the literary giant she is today. However, her tenacious work ethic and power of observation and communication has earned her a place as an icon for the centuries.

In the last few decades, more and more once-forgotten and once-sidelined female writers and writers of other minority groups have been recognized for their contribution to the literary world. Some even actually were found to have set precedents once thought to have been set by their more privileged counterparts.

Jane Austen is one of those rediscovered literary and life icons.