How Visiting The Vatican Solidified My Jewish Identity
Odyssey

How Visiting The Vatican Solidified My Jewish Identity

It was amazing, but it wasn't me 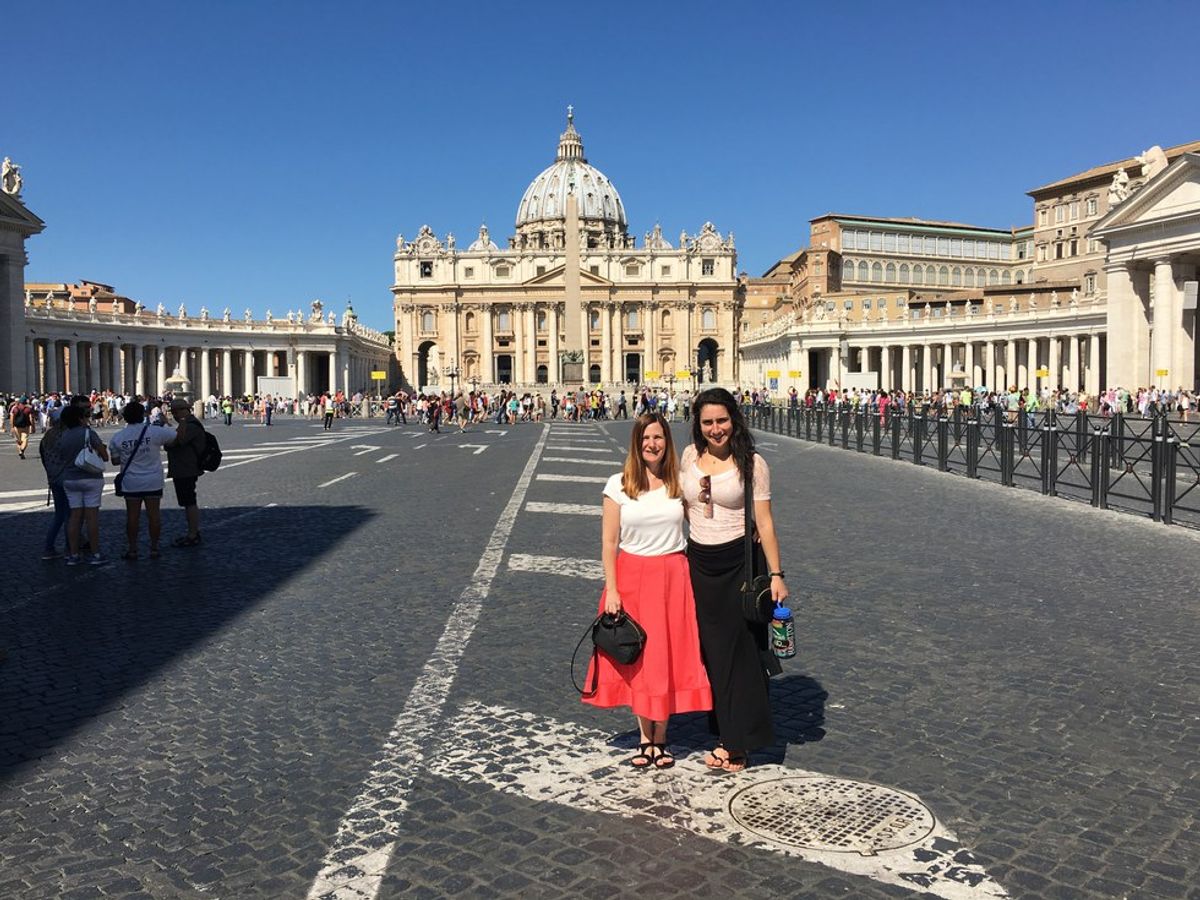 My family and I rounded the corner, and Saint Peter’s Basilica suddenly appeared at the end of a cleared road, blocked off to salvage this exact view. As we approached the building, in our long skirts, and covered shoulders, I began to understand just how huge and breathtaking, and yet small and compact, Vatican City really is. I have four adjectives to sum up what I realized about the place: It was clean. It was white. It was old. It was Catholic. Basically, aside from being clean (as clean as possible), and white, it was not me. I like to think I’m not old – at least, I’m definitely not as old as Saint Peter’s Basilica – and I am Jewish.

This is not to say that my visit to Vatican City was by any means unsuccessful or unrewarding. It was beautiful and eye-opening, and way more massive than I could have imagined. We toured the underground necropolis from the first century AD, saw St. Peter’s bones, and saw where the most recent popes are buried. Like I said, this was all incredible. However, no matter how intrigued I was to see it, and no matter how much I had looked forward to the visit, I couldn’t deny: I found myself feeling very out of place spiritually.

After leaving the Vatican, that day and after returning home a week later, my family discussed our visit, and my feelings remained the same every time: It was awesome. It was massive. It did not make me “feel Catholic” or “spiritual” in any way. In fact, it did the opposite. I appreciated, even loved, seeing the group of young adults on their pilgrimage there, and the families who filed in and migrated to the chapel and confession areas. I loved that they felt connected – to their religion and to each other; but I was just observing. I was an outsider. I felt the need, after that day, to visit a synagogue. Specifically, the Old Jewish Quarter in Rome. That was the next day. My family visited the old ghetto where the Roman Jews were forced to live for a little over 300 years (from 1555-1870).

Upon arrival there, it felt right and familiar. I knew all of the stories and traditions told and supported by the artifacts in the museum. I didn’t need the explanations or tour inside the synagogue – I knew it, I’ve lived it. “Ah yes,” I thought, “The small corner of the city where the odd-ones-out practiced their religion and customs in secret. The oppressed people with the closed-in walls, disintegrating buildings, and single, reluctantly-built synagogue. These are my people. Now I am home.”

During our family trip to Italy, we spent many days visiting and climbing to the top of old Catholic basilicas and baptisteries. Every one of them was beautiful and inspiring. But not one of them gave me a feeling of home and familiarity quite like the only synagogue I spotted. Churches on every corner make Italy what it is – they are such a large part of what makes the country amazing, and I genuinely wonder what it must be like for people of those religions to feel spiritual in those places. But I do not yearn for that feeling; I know that feeling, but I know it in a different way, in a different place, and this trip has made that ever-clearer. More than I realized it would, my visits to numerous cathedrals, and the holiest place in the world for the Catholic religion, actually made me feel more Jewish than ever.

Glorie Martinez
5623
Why I Write On Odyssey