Holiday Cheer For Everyone

Holiday Cheer For Everyone

Spread cheer all holiday season, even at Ithaca College. 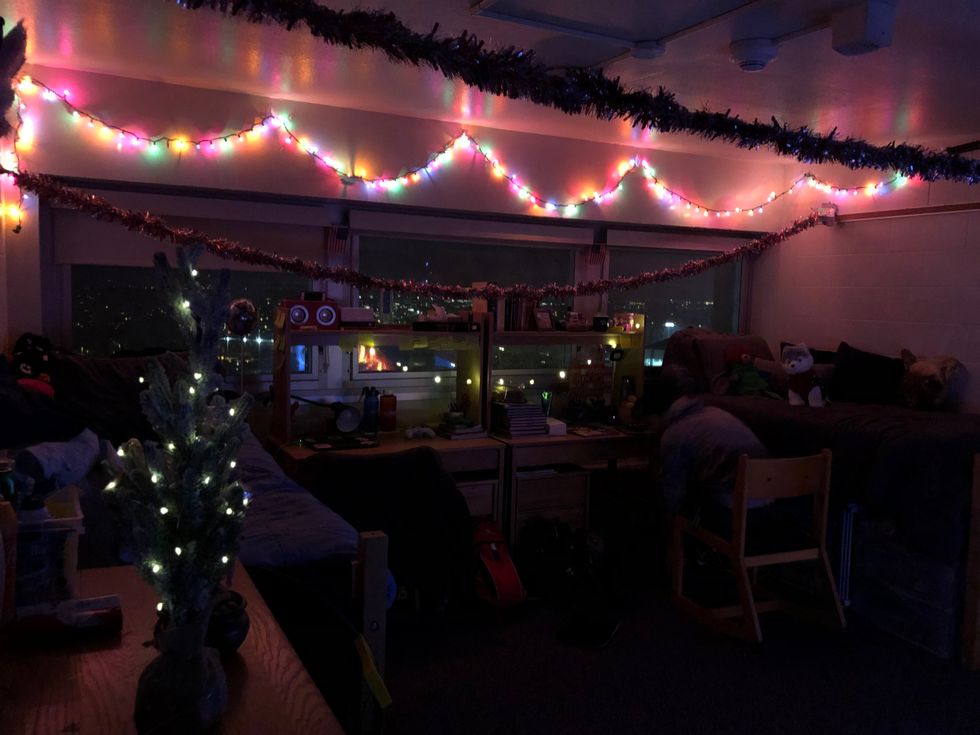 The holidays, a time for over commercialization. A time where everyone seems to want to get in the spirit by any means necessary. But what does that mean on a college campus?

Holidays in college are so easier than holidays anywhere else. All you have to do is have a fake plant and boom! You're festive AF.

Since there are only three weeks between Thanksgiving break and Christmas break, college campus' cram as much cheer as they can. It's a way to distract you from the ever-looming pressure of finals week. Instead of having to deal with kids having mental breakdowns, put in a Christmas movie and all will be better.

I lost track of how many dorm community events have happened in the last three weeks. There has been gift wrapping, holiday movies, there was even a snowball. Yes, a snowball.

A snowball that consisted of gingerbread men decorating, raffle prizes, and of course the cupid shuffle. Can I just say my roommate Steph made a really cute gingerbread cookie. She gave it to me to eat instead because she doesn't actually like gingerbread. What she didn't know is that she picked a burnt cookie and almost broke my teeth.

Also, in light of the snowball, when the cupid shuffle came on, my friend Megan went wild. She and her friends from home have a very special way of doing this dance, and I can assure you everyone in the room was watching her. She had so much energy for a party that started at seven at night.

Now I may have mentioned before that Christmas isn't my favorite holiday. So imagine walking into the snowball and seeing me wearing all black versus my friend Emma wearing an elf dress with candy cane striped stockings. She was the embodiment of Christmas cheer.

There was a holiday event in my friend's' dorm too. Still not sure if I was supposed to be there or if it was a private event, but I went anyway. They had a holiday dinner with a bunch of treats. It was topped off with a photo booth, and (you guessed it) another raffle.

I think Ithaca College really likes its raffles. I'm not complaining though. I like free stuff just as much as the next broke college kid.

A lot of dorm community events have come and gone, but the students on campus sure love the holidays too. I mean you should see my friend Mike's room. It looks like Christmas threw up in there!

He has lights, garlands, and all sorts of other decorations. He always is playing Christmas music, and for effect he has a fake fire on his television monitor. Oh, and let's not forget, Derek the inflatable Fa La La Llama he has in his room.

Yes you read the sentence above correctly. My friend Mike one of those blow up decorations you see outside houses in his room. It's in his room, and it's a Llama and his name is Derek.

Steph and I will never be on Mike's level, we only decorated our door, there are a couple Hanukkah decorations she has here and there, but that's it. Our room hasn't changed that much. Is it some kind of universal thing that college campuses are supposed to get more festive?

You will not believe how many end of the year parties are holiday themed. The other day I went to Steph's acapella group party. They had an ugly sweater party.

Who knew that many different Hanukkah sweaters existed? There were so many different events happening. My friends Zina and Paris could be found in the lounge perfecting their mean girls Christmas dance for the mock trial holiday party they had.

The holidays are welcomed with open arms at Ithaca. If you ever are too stressed about finals, just put on a Christmas hat...everything will seem better.