Note-Worthy Moments Of My Thanksgiving
Odyssey

Note-Worthy Moments Of My Thanksgiving

The Good, The Bad and The Moist 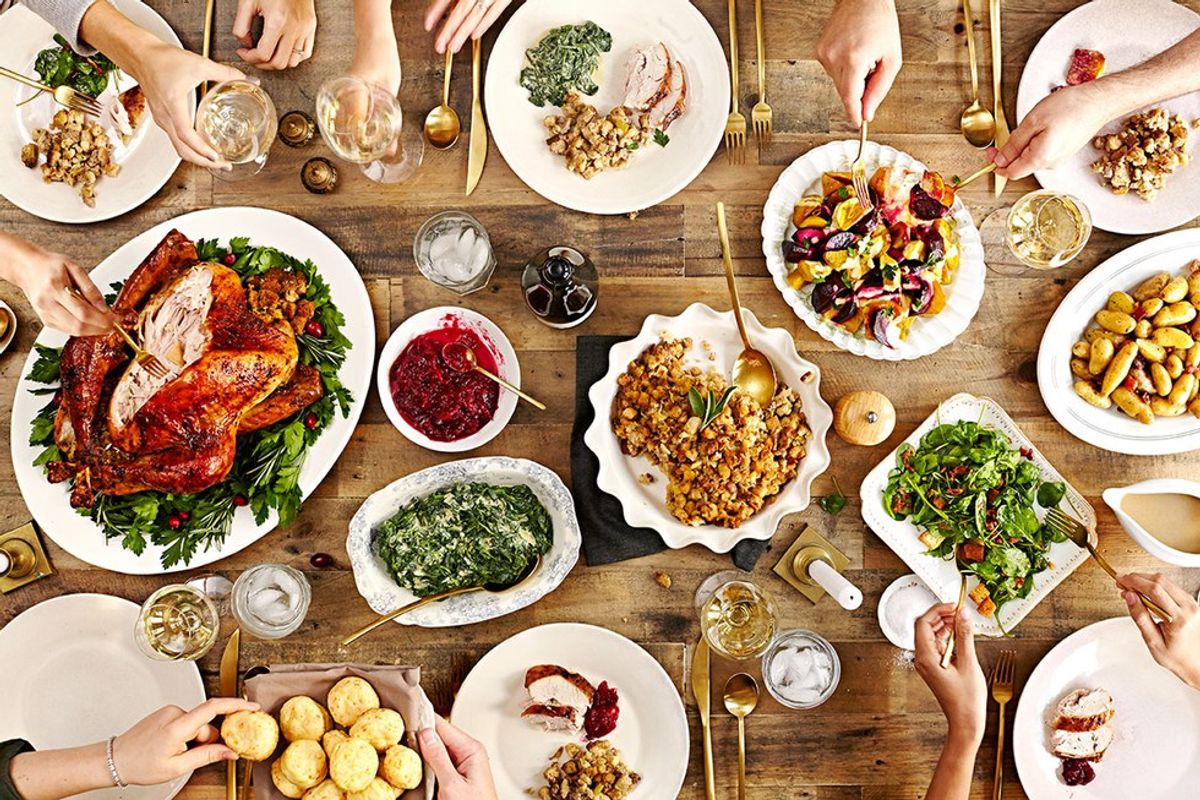 It all started pretty early, because I set an alarm and actually got up when my alarm went off. (This hasn't really been happening this break.) I made breakfast for my parents, this kind of Chex mix called "field goal mix," and a cup of coffee for myself in less than two hours. I felt like a mom.

I interrupt this story to share the field goal recipe.

What you will need:

- six cups of popcorn (I got this much out of one bag.)

- one package of Oreos (The recipe called for 32 Oreos, but I figured two less wouldn't make that much of a difference. A package only has 30. I also didn't have regular Oreos, so I used the chocolate ones. This was actually a really nice substitute.)

Break the Oreos and potato chips into smaller pieces. Let the popcorn cool. Mix all these things into a big bowl. (I ended up mixing it all with my hands because it was most effective.) Enjoy the salty sweetness of this super easy crowd-pleaser!

The day continues, and we head to my grandma's house for Thanksgiving lunch. We walk in, and a cloud of heat hits us. This is typical of grandma's house. Someone sneaks over to the thermostat and turns the heat off (also typical). I am wearing a long-sleeved flannel shirt, thinking, "It will cool down." My uncle and his group are already there. This means that two youngsters three and under are running around causing more trouble than we know.

I go to use the restroom, but I see that the main bathroom has its door closed and light on. A normal person would think, "That's occupied. I won't go in." This is what I did. Sometime during all this, my dad went to the basement and noticed a leak coming from above. He finds that the sink in that "occupied" bathroom was left on and overflowing. The carpet was soaked! This was all a result of a 3 year old, adventurous girl. One bathroom is left for a big group of people to use now.

Everyone starts arriving, totaling about 30 people there at one time... and it definitely didn't cool down. We do the standard potluck meal when we get together, and we had way more food than we needed. There were not even enough seats for all of us, but we made due. Then, we did what every normal person does after gorging themselves with Thanksgiving food. We decided to play with the football followed by the volleyball. All was good with that, except I ended up hitting my niece with the football. IN THE FACE! Yes, I hit my niece in the face with a football. She handled it well, but I felt terrible. If I'm being honest, she totally milked the incident too. She has a flair for the dramatics.

The day finished off with jokes about Rosey women being the "followers" of the relationship, planning out our Christmas festivities and shamelessly mocking and changing the movie "Step Up" for sole entertainment. I didn't actually feel tired from all of the food and activity until the ride home. Thankful to be the passenger, I took a nice nap on the way back home. I have never wanted to go to bed at 8:30 p.m. that much in my life!