Presented by What the Sound, Henry Hall was finally able to tour and perform songs from his first studio album Neato in front of a live audience 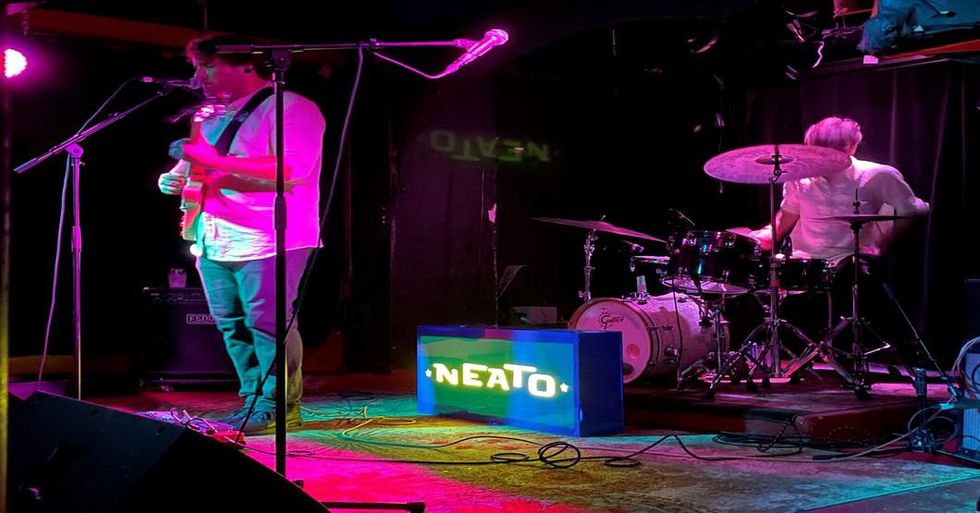 Musician Henry Hall brought the heat to his last show on the Neato tour in Cambridge, Massachusetts on Tuesday, August 24th. Located at the Middle East Nightclub, the show began around 9 p.m. and opened with the Massachusetts-based band Year Of The Clam. Consisting of Sean James Sweeney on vocals and guitar, Ingrid Jin on vocals and bass, and Joren Carlson playing drums; the band opened up their set with the very delightful and easy-going track "Strawberry Ice Cream." After the band performed their third track "Forgiveness" Jin gave advice to the crowd and said, "Sometimes forgiveness is the key to set your heart free." Immediately following this track, Sweeney turned on a nearby bubble machine and the band performed covers of the songs "Mama Said" by The Shirelles, and "Heart of Gold" by Neil Young. To close out their set they played the song "Let Me Sleep" off their 2019 album Precious Pearls.

As Henry Hall began his set-list with his drummer Zack Segel, he ushered people together and encouraged them to approach the stage. "Uh uh," he stated, "I don't like whatever this is." He said as he motioned towards the large gap separating the stage from the crowd. As soon as the crowd drew nearer to him, he began playing the song "Tattoo" off his debut album Neato. Due to the album's release being towards the start of quarantine, the room was instantly alive with music that the audience had been eagerly waiting to hear for some time. Immediately after "Tattoo," he performed "13 Besties" and "Life of Me." As he tuned his guitar, Hall thanked the crowd for being there and for Year Of The Clam opening up the night. He also told a small story about how he and Segel had met Mark Zuckerberg while on a stroll through Harvard prior to the show.

Following the story about meeting Zuckerberg, the duo played "Nervous Cousin," (a song about Hall's cousin being nervous about his mom), and the track "There" off Hall's 2019 EP Questions, Comments, Concerns. During a brief intermission after "There," Segel told the crowd about a new app he's creating called "Cttn" in which, "We just collect your information. That's it."

The sixth track of the night was "John the Dog," in which Hall told the story about his younger self playing with an imaginary dog because his mother wouldn't allow the family to get a real one. Afterwards they performed the songs "Dream Lover," "California," a cover of "Uh Huh" by Julia Michaels, and "She's Got You" by Patsy Cline. To close out the show the duo performed the outstanding tracks "Not In My House," and "Alive, Annoyed."

In an interview after the show Hall described that he usually gets his voice ready by, "Sucking on those Halls lemon throat lozenges." He added, "I bought a big ol' bag of them at Target, I got the economy size; 80 of them. I had two, and then I had some tea, and then I do like a seven-minute vocal warmup. Then I try to get Zack to do the Theragun on my throat." Segel immediately interjected and said, "You're not supposed to do it on the trachea, it goes very hard. They say specifically, 'Don't use it to massage your trachea because it can fracture your windpipe.' You can die Henry! This is what I tell him every Single. Fucking. Day." To which Hall retorted, "But then when he tells me that it fills me full of life because I'm living so close to death."

Soon after their disagreement upon using a Theragun to sooth your throat (as side note, you should follow Segel's advice) Hall answered why they didn't play one of their most popular songs "Guy." Hall said, "We haven't played 'Guy' live. I know it's blasphemous. Well, some things just get cut you know." To which Segel replied, "I wanted to play 'Guy.' I didn't tell you that but…*proceeds to sing the song*.'" Hall immediately said, "Yeah that is how it goes! That's not helping! I think in all seriousness we probably will play it next time around, but I never want to force playing something live. The audience is a lot smarter than you think, and I'm a lot stupider than I look so I don't want to – it never quite came to me how to do it live without the vocoder and teensy, electronic-metallicy sounding verses. But we'll figure it out and do something with it. For awhile I didn't play 'There' live but then [Zack and I] started playing it. And we did the first verse and chorus quiet, and built to a bigger thing, which worked. So I think we'll do something like that with 'Guy.'" He added, "On the West Coast we had two backup singers, a bass player, a drummer, and me. So we played 'Edna,' 'Monica,' we covered 'Use Me' which was fun. I always come to what the setlist is pretty naturally, I like to start with a bang and then go down a little bit to a song that a lot of people know, and then build it back up to something loud and rocking like 'There.' Then get a little quiet in the middle, and build it back up again in the ending. So it's kind of like a peak-to a small valley-to a peak-to a big valley, and then all the way up to its biggest peak."

As the interview wrapped up, Hall announced that he will be putting out new music before the end of 2021, and hopes to do a northeast tour as well. He also mentioned that this tour had surprised him in some ways, "What surprised me was how well 'Tattoo' worked as an opener. I think it's familiar for people, the beat and melody are both easy to grasp. It's high energy enough as an opener, and it's got some funny lyrics. It's like a three-pronged attack." Whereas Segel said, "The most surprising thing was when we played on Saturday. There was a tropical storm and everyone was soaking wet when we went on. We could hear their wet, squishy socks while we were playing. iPhones had sent out the flood warning so I was surprised that so many people came."

Be sure to catch Henry Hall on his next tour, and stream his debut album Neato out on all major streaming services. You can also purchase Neato on vinyl by visiting his website.