I'm sorry, but this is male privilege to its fullest extent. 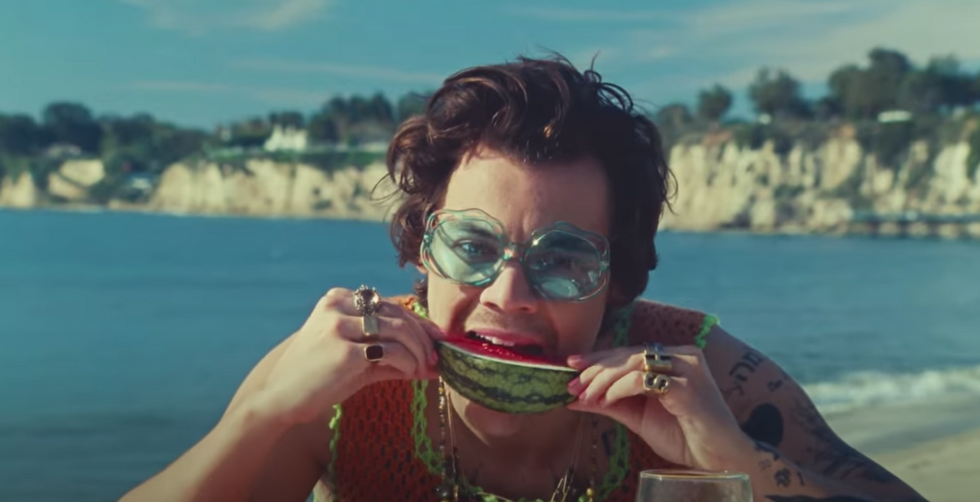 Don't believe me? It's all over everywhere.

Props to Harry for asking, but there's a bigger issue at hand here if asking to touch someone's hair makes them the king of consent. In fact, it makes me highly concerned for America and how low we have set the bar for being "a king" when it comes to consent.

I mean, he is literally being praised at the highest level for just being a decent human being and displaying basic respect.

Didn't every 5-year-old everywhere learn this same thing, "Ask before you touch?" I don't see them getting a crown and a viral post on BuzzFeed's Instagram...

In fact, just check out the lyrics to "Watermelon Sugar" by the supposed "Consent King," and you may not be so quick to call him by his newfound nickname.

The lyrics are disgusting, and the music video is horrible.

This is quite literally male privilege at its finest. I mean, really, we're going to praise a man for asking to touch someone's hair, but we're not even going to remotely bring up the fact that his entire video objectifies women while he sings lyrics that are clearly not about eating a watermelon... at a family picnic.

This is the problem with privilege in today's society. We look at a single action someone does, and when they are privileged just based on inherent traits about themselves — like being male — we erase everything else about them. We erase the way they objectify women in their lyrics, in their music videos, etc.

If Harry Styles really cared about being the "Consent King," he wouldn't have filmed a music video like "Watermelon Sugar."

Just take another look at what rolls onto the screen three seconds into the video:

I'm not taking away the fact that he asked, which yes, is more than what a lot of people do in modern society, but we still shouldn't be praising him for a very simple action. Just because it's above and beyond what the average man does, it doesn't actually make it above and beyond.

It sets the standards for men across America at an all-time low when we praise a public figure for doing something that should be expected and demanded, and the more we continue to do this, the lower our standards for men will drop, the more they'll be able to get away with just because they're male and the worst part of all: females will be shocked when a man asks for her consent on the big things.

In fact, my heart goes out to the female model who felt the need to give him this label of the "Consent King." I can't help but wonder how bad her experiences with men have been for her to be that thrilled over someone asking to touch her hair.

This move set the bar for standards extremely low, and it breaks my heart to think that young girls out there are going to think a man is a master of consent or a complete gentleman just because he asked to touch her hair.

What about the big things?

What about the things happening in society that brought about shows like "Law & Order: SVU?"

That show will run for 100 more years if we praise behavior like Harry Styles' as the epitome of consent.

We shouldn't praise someone who simultaneously uses girls in his music videos in a vulgar way. We need to show young girls and teenagers that a true man respects every part of your body, not just your hair.

Then, and only then, when he respects everything about you can he be labeled a "Consent King."