Which 'Hamilton' Character You Are, Based On The Zodiac

Raise a glass to the zodiac. 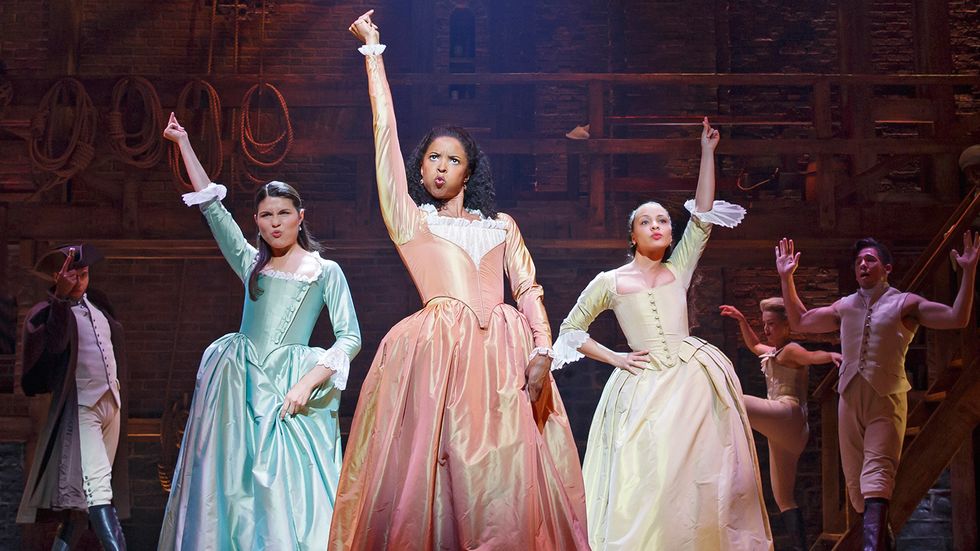 Millions of musical-lovers around the world rejoiced when "Hamilton," the hip-hop-mixtape-turned-musical harder to get in to than Studio 54, came to Disney Plus.

For those who had the luxury of being able to watch it in person and rewatch it with us mere mortals on our screens, the experience was almost as gripping as sitting feet from Lin-Manuel Miranda himself. From the stunning sets, graceful choreography, witty dialogue, and hauntingly beautiful singing, the experience was one even my musical-averse family felt moved by.

One of the greatest powers of the musical is its ability to be simultaneously aspirational and relatable, even despite the drastically different time period and fact that most of us have no plans to hold political office any time soon. Whether it be Eliza Hamilton's unwavering loyalty, Thomas Jefferson's undeniable swag, or King George III's exaggerated opinions, we see either ourselves or our best friends and family members in at least one of the revolutionary characters.

You know how to lead with your no-nonsense attitude towards life. but your sensitive side knows when it's the right time to step down and back. For the people you love most, you provide helpful, pointed advice and guidance without the frills.

You may be quiet, but your extreme loyalty is powerful. Your greatest strength (and downfall), your allegiance is what makes you value close, intimate relationships with the people lucky enough to be in your life.

Nearly everyone gravitates to your outgoing, social attitude — it's hard for anyone not to fall in love with you. What people see less of is the deeply sensitive side of you, reserved only for those closest to your heart.

Your conservative ideals make it difficult for everyone to relate to you, and change is something that makes you extremely uneasy. People know you as the emotional person in their life, something that can be a good thing at times when you have the right people to lean on, or a curse for your tendency to let feelings take over rational thought and logic.

You love and crave attention with your loud, outgoing attitude. It's exactly what makes people love you. But for the people closest to you, your confidence is infectious, and you're the most uplifting, loyal person in their lives.

You're extremely hard-working, but often get overlooked as a sidekick or underdog for your quiet patience. It's when your creative side comes out that you truly shine, even if you come up with the craziest of ideas (like siding with an infamous enemy).

Your undeniable charm is seductive and intriguing, but your underlying passion for order, organization, and equality is what makes the masses fall for you — nearly anyone would give you a glowing endorsement.

You get a bad reputation as having a lot of enemies and can be a little resentful of it at times. But it's only because you have a guard up and find it easier to keep you fiery passion a secret than to open yourself up to judgment and potential hurt. Your deep and know that embracing your (inner and external) enemies would do you good, but it takes a lot more than the average person for you to do so, so you'll often choose impulse over patience.

It's hard to pin down your restless mind, body, and soul. It's true, you'll never do something halfway — it's either all or nothing with you. It takes time for people to catch up with your progressive ideals and adventurous side, but with the right team behind you, you're unstoppable in your relentless attempts to change the world with your futuristic take on life.

You're one of the most ambitious and disciplined people your loved ones know, and they often forget how much they rely on you for your incredible knack for getting tasks done efficiently and effectively. Yes, you can occasionally be a bit stoic, if not pessimistic, but it's only because you know being realistic about life is the best way to tackle life's obstacles.

You're often overlooked as being simply playful and kind — everyone's favorite friend. But eventually, people see you're so much more. Yes, you're like some others in how idealistic you are. But it's your giving, philanthropic side leveraged by fierce independence that makes you a force to be reckoned with, changing the world for the better with every idea you quickly put into action.

You're fun and playful — everyone's favorite person to have a night on the town with. Though it's hard for people to take you seriously at times, those who truly take the time to are extremely lucky to know your deeply emotional and empathetic sign. You'll do just about anything to make others feel better, but because you don't always think through your impulses, you're used to dealing with their consequences.

Images courtesy of Disney Plus.