'Hala' Is The Muslim Story We've Been Waiting For

'Hala' Is The Muslim Story We've Been Waiting For

The Muslim Narrative has always been non-existent in Hollywood. With "Hala," it is now front and center. 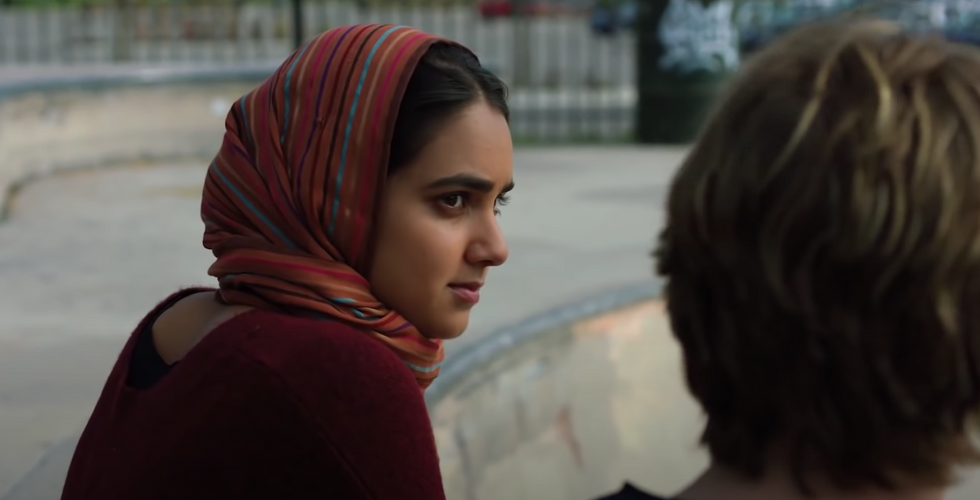 What do you think when you hear the term 'Muslim girl?' Perhaps, you envision a young woman who is different, foreign. Someone who is quiet, meek. Shrouded in a hijab, not an inch of her body exposed.

What if I were to tell you that there so many women, who happen to be Muslim, and are nothing like that at all?

"Hala" is a tale that follows a Pakistani-American Muslim teen who is navigating her life through various lenses of her identity. The 2019 Film is Baig's second cinematic creation, produced by Jada Pinkett Smith and distributed by Apple TV+.

Hala is a reserved, soft-spoken girl, yet intuitive and alert. She enjoys skateboarding, poetry, and is an avid writer with a promising future in literature. She is a balance between stereotypes about Muslim women and the antithesis of those stereotypes.

"Hala" is set in the comforts of American suburbia. Her father, Zahid, is a struggling lawyer who enjoys small, loving moments with his daughter throughout the film. We see him as an ally to Hala, and his gentle nature is presented as a challenge to the trope of hyper-controlling, brutal Muslim man.

Hala's mother, Eram, is a traditional Pakistani Muslim mother who tends to her home and often clashes with Hala because of the importance she places on rigid cultural values. Hala's mother does not speak English well, despite living in the United States for over 10 years. This language barrier widens the already-present gap between mother and daughter.

Eram, oblivious to Hala's blissful actions, believes that she has missed her morning prayer because she slept in. This is the first of many fiery exchanges between mother and daughter.

Hala's range of sexual discovery is not limited to personal pleasure. She has a crush on her fellow classmate and skateboarding rival, Jesse. A crush, harmless to many, unacceptable for Muslim girls. To further complicate matters, Jesse is non-muslim and white. We witness a couple of intimate scenes between the two, which is an underhanded jab at the sexual rigidity of Muslims.

Initially, this relationship was met with criticism by some Muslims who believed that Jesse's character was written as a "white savior" and as an escape from religious theocracy. What they do not realize, however, is that navigating sexuality in a conservative religious space, especially as a Muslim girl, is a journey in itself.

Baig's portrayal of how Hala handles these arousing emotions capture the duplexity of Muslim women and the uncovering humane desires they so often suppress.

The dynamics of parent-child relationships are another component tackled in Hala. Growing up as a third-culture teen, she must straddle the expectations of her traditional mother and her own desires. Hala's father is an advocate for her, but as the film progresses, we see him turn into the antagonist.

From his affair with another woman to his mishandling of Hala's relationship, the bond between the two quickly derails.

In turn, Hala grows even closer to her mother, and she becomes her confidant. These family dynamics expose the real-life trials and tribulations of Muslim families. The contrast of a Muslim father who starts out as the stark opposite to Muslim male stereotypes but later becomes the embodiment of those stereotypes challenges the broad and limiting image that Muslim men are pigeonholed in.

Perhaps, the most climactic moment in the film is the confrontation between Eram, the mother, and Zahid, the father. Eram has had enough of Zahid's years of neglect and cheating, so she announces a Talaq, a triple divorce.

In Islam, there are various forms of divorce, with women and men having the right to initiate various kinds. Talaq, the most notable one, is an initiation that is only carried out by men. A husband would say 'Talaq' three times to his wife as a formal repudiation.

Eram uses Talaq on her husband and finally puts her foot down in her failed marriage. Talaq, for women, is something that is taboo and unheard of. Women who initiate Talaq can be scorned and excommunicated from the Muslim community.

Hala's mother, an uneducated Pakistani housewife, is taking back her power. By announcing Talaq, she is displaying agency, something that is often denied to Muslim women. She and Hala then relocate and each begins to carve out their own path separate from the man in their life.

Although "Hala" has caused a stir amongst Muslims, there has been much praise for the film by many critics. It offers a new perspective on Muslim life and the various intersections that shape Muslim life.

Being a Muslim girl in this country, I know that Muslim representation is non-existent in American cinema.

Whenever there is a Muslim person in a tv show or film, they are always portrayed in a negative way. The narrative of Muslims in Hollywood has been violent, repetitive, and reinforces tropes about Muslims.

That is why "Hala" is such an iconic and necessary film in our current climate. Baig's film does its best to capture the complexity of being a Muslim woman today while conveying that this is only one slice of the Muslim story.

"Hala" is a nuanced portrayal of American Muslim life that Muslims have been craving and Hollywood has been missing. The film welcomes outsiders to Muslim duality and allows Muslim girls to see themselves, their full-selves, on a big screen.

"Hala" is definitely the first of its kind, and hopefully, the predecessor to many that are to follow.