Who's The Guy Behind The 'White Guy Blinking' Meme?
Odyssey
CurrentlySwoonLifestyleHealth & WellnessStudent LifeContent InspirationEntertainmentPolitics and ActivismSportsAdulting
About usAdvertiseTermsPrivacyDMCAContact us
® 2023 ODYSSEY
Welcome back
Sign in to comment to your favorite stories, participate in your community and interact with your friends
or
LOG IN WITH FACEBOOK
No account? Create one
Start writing a post
Entertainment

Who's The Guy Behind The 'White Guy Blinking' Meme? 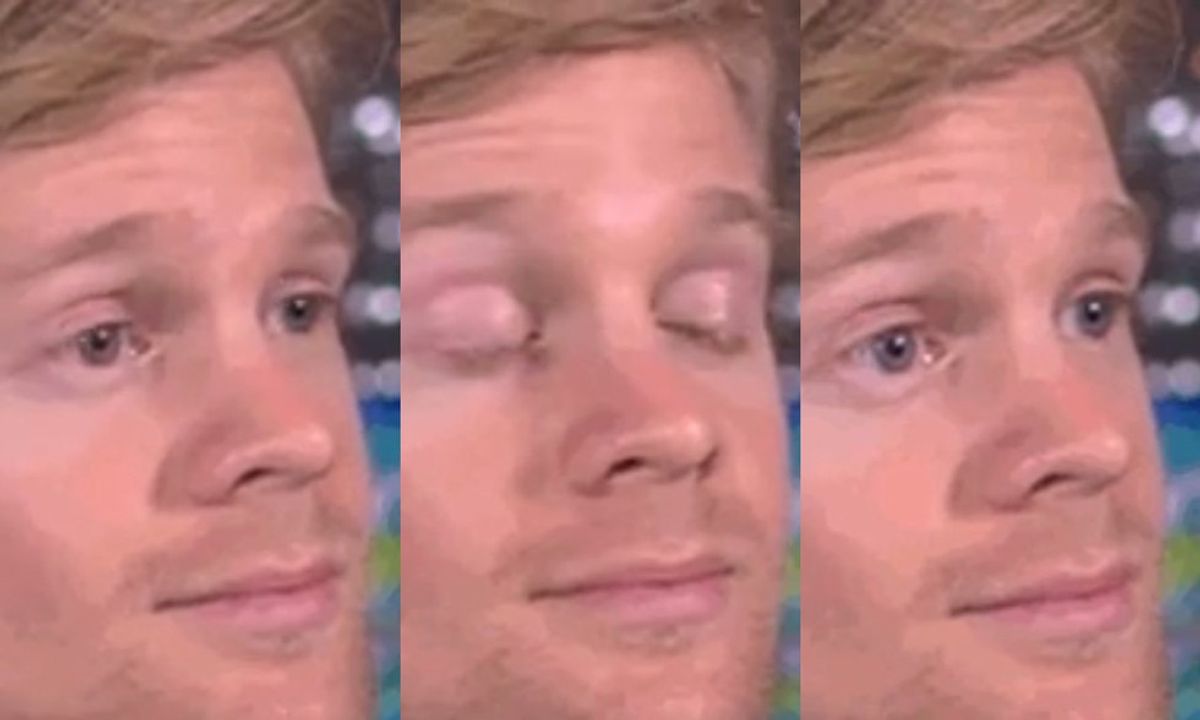 Essentially, it serves as a way to say "excuse me?" solely through blinking —see below for examples:

Scanlon is a cherished member amongst the Giant Bomb community and is known for his nice and calm demeanor and specifically for his expressive mannerisms that normally go unnoticed .

Really, they're quite incredible —

Giant Bomb hosts a weekly show called "Unprofessional Fridays" where they stream themselves playing a plethora of different video games. "They can last several hours at a time." Scanlon says in an interview with Buzzfeed . “When we’re recording these videos we always know we’re visible to the audience,” Scanlon said. “You can kind of be yourself and be silly.”

You can see Scanlon reacting similarly in the bottom right corner.

Below is a 2013 segment of "Unprofessional Fridays" where editor-in-chief Jeff Gerstmann plays, Starbound, an action-adventure game that requires players to grow their own crops. Gerstmann walks the audience through his methodology saying, “I’ve been doing some farming with my hoe here.” And in the top left-hand corner, you can see Scanlon — as Buzzfeed says , momentarily caught off guard by the statement.

“Yeah, I reacted,” Scanlon said, laughing. “That was a total throwaway joke.”

The meme has gained stardom for being surprisingly versatile and relatable to audiences. However, Drew Scanton himself, isn't too phased about the fame. He hasn't been recognized in public for the meme as of yet, but gets a kick out of who people think he is

“One lady thought I was from The Bachelor,” he said, laughing.

Regardless, Drew Scanlon seems to be quite amused by the entire situation.

In an interview with the Guardian he says,

“I like what memes can do for people. They’re such fun, throwaway things I see. These memes have been generally positive.

“It’s a little scary because there’s always the danger someone could change it to something different.

“It’s not like I’ve a say in what the internet does with a gif of my face. But I’m pleased to see people are enjoying it.”

In response to the unofficial “White Guy Blinking” name of the meme, Scanlon tells Buzzfeed News that he doesn't have a problem with the name itself. “I’m a very white person,” he says.

He also apparently does public appearances!

Nicole Marie Nigro
Individual Creator
9541
c1.staticflickr.com
Where to start...... Let me start with the cliche that life throws us curveballs and what we do with it is what counts.