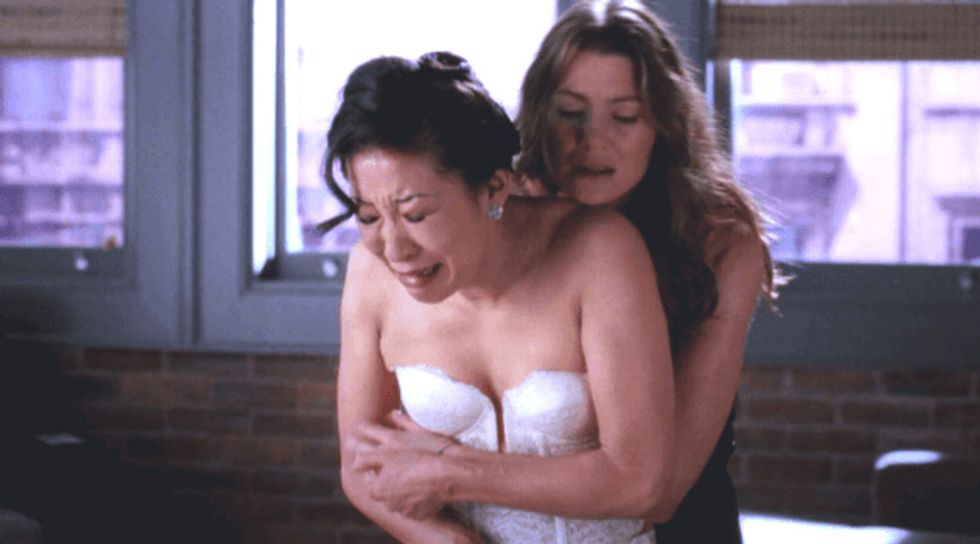 *Spoiler alerts* I know a majority of you have watched every episode more than once (because you obviously clicked on this article) and this will cause you to shed a few tears, and I apologize.

Yet if you haven't watched to at least season 13, do not read. (Or read but don't get mad at me since I gave you a spoiler warning.) Shonda and the writers have taken us through a lot of deaths, shootings, accidents, fires, floods and a whole lot of crazy. Sometimes I am overwhelmed, okay, a lot of the time I am overwhelmed. My mom makes fun of me for being emotionally invested, but like Izzie is lying on the bathroom floor in a post-Denny-death-haze, and Derek is unable to communicate and dies from a simple mistake. A LOT HAPPENS YOU DO NOT UNDERSTAND.

Here are 15 scenes and moments that ruin these perfectly good songs for me:

Between Meredith having her freaking hand on a bomb in a body cavity, Bailey's husband almost dying, Bailey giving birth and George helping her, I guess you could say I was a mess.

"An hour ago he was proposing. And now... and now he's going to the morgue. Isn't that ridiculous? Isn't it the most ridiculous piece of crap you've ever." Honestly, this whole scene had me sobbing to the point where I couldn't breathe. This song is also played in season 7, episode 18 when Callie and Arizona get in that car accident, and in Season 11 in episode 21 and 22 when Derek is dying.

Honestly, I can't hear this song come on Spotify without me thinking of these gut-wrenching scenes.

All I Need by Matt Kearney

I knew I would be a mess when Denny died because all I wanted was for Izzie to be happy and he kept her somewhat less crazy and moody, but of course, even tv characters don't get happy endings. This whole episode they're trying to get Izzie out of her dress and off of the bathroom floor. And of course, when they finally are able to get her off of the floor and out of the dress they play this song. The usual Grey's fashion.

Make This Go on Forever by Snow Patrol

A lot has happened in this episode. Meredith holding her breath underwater in the bathtub, the ferry crashing, Alex saving soon-to-be crazy Eva, and then, of course, something happening to Meredith. I feel like Meredith gets the short end of the stick every damn episode and it's even her show!

When Burke stood up Cristina at their wedding I felt victimized as well. But when Meredith gets to the apartment and Cristina is walking around noticing that Burke is gone completely, and then breaks down saying, "He's gone. I'm free," and needs to be cut out of her dress, I went through a box of tissues in 3 minutes.

The moment I didn't think I could love McDreamy more than I already did, this scene tells me differently.

Owen being in the military is no new news to us watchers. Yet this part really opened my eyes. We knew that Owen dealt with PTSD but this song and the mix of love and forgiveness Cristina has for him after makes me tear up every time.

Off I Go by Greg Laswell

Between Meredith finding out George is the one who was dragged by a bus, to Izzie flatlining I was already a mess. Yet the elevator scene really made me sob uncontrollably. These writers definitely know how to pull on my heart strings!

In My Veins by Andrew Belle

Between everyone being pretty much shot in this episode or being held at gunpoint honestly, Mandy Moore's character Mary Portman's story is one of the real heartbreaking ones. This girl was excited to FINALLY have her surgery that her and doctor Bailey have been waiting for, instead, she holds Dr. Charles hand instead while he dies. What a curve ball they really threw at the poor girl.

How to Save a Life by The Fray

I hated the "music event" episode. SUE ME. Yet I know many people feel the same way. I honestly found it cheesy, but the whole story line with Callie and Arizona and the baby had me on edge and anxious. How to Save A Life is also the title of the episode when Derek dies, fitting, but I feel attacked.

Don't get me wrong, I obviously love Owen and Cristina, and I obviously love Meredith and Derek, but Teddy and Henry's relationship was so underrated. This scene is one of the most heartbreaking scenes in this season, but also within the show in general. This poor woman tried so hard to not love him and not to be attached, and when she finally accepted that she was in love with this patient she was just really trying to save, (but who was definitely in love with her) it was too late. He died during surgery before she could start a real life with him.

Where Does the Good Go by Tegan and Sara

Maybe I'm extra attached because I have a Grey to my Yang or maybe it's because I can't listen to this song in the car without needing to dance and instantly getting sad. This is the last time we see Cristina and Meredith together on screen (not counting phone calls.) This scene is more of a bittersweet crying moment, but nonetheless, there are always tears.

We Built this City by Aron Wright and Jill Andrews

Leading up to this we see Jackson and April struggle with important issues and topics within their fresh relationship, but the topics really come to light when April tells Jackson she is pregnant. We also see Owen and Cristina fight for their relationship, (well, more like Owen) and trying to keep the life they "built" together.

My stomach dropped and my heart sunk the minute these few words were said between Karev and Meredith. "Since when do you pray?" he asks her. "I'm not," she says. "I'm talking to Derek." I mean, did everyone go through that scene with dry eyes?

I had a feeling Maggie's mom was going to die the minute we found out she had breast cancer and was hiding it from Maggie for so long. This heartbreaking scene of Meredith talking Maggie through what to do while her mom is still alive definitely had me crying and hearing Maggie saying she wasn't ready to let her mom go made me go through even more tissues.