What will happen this season? 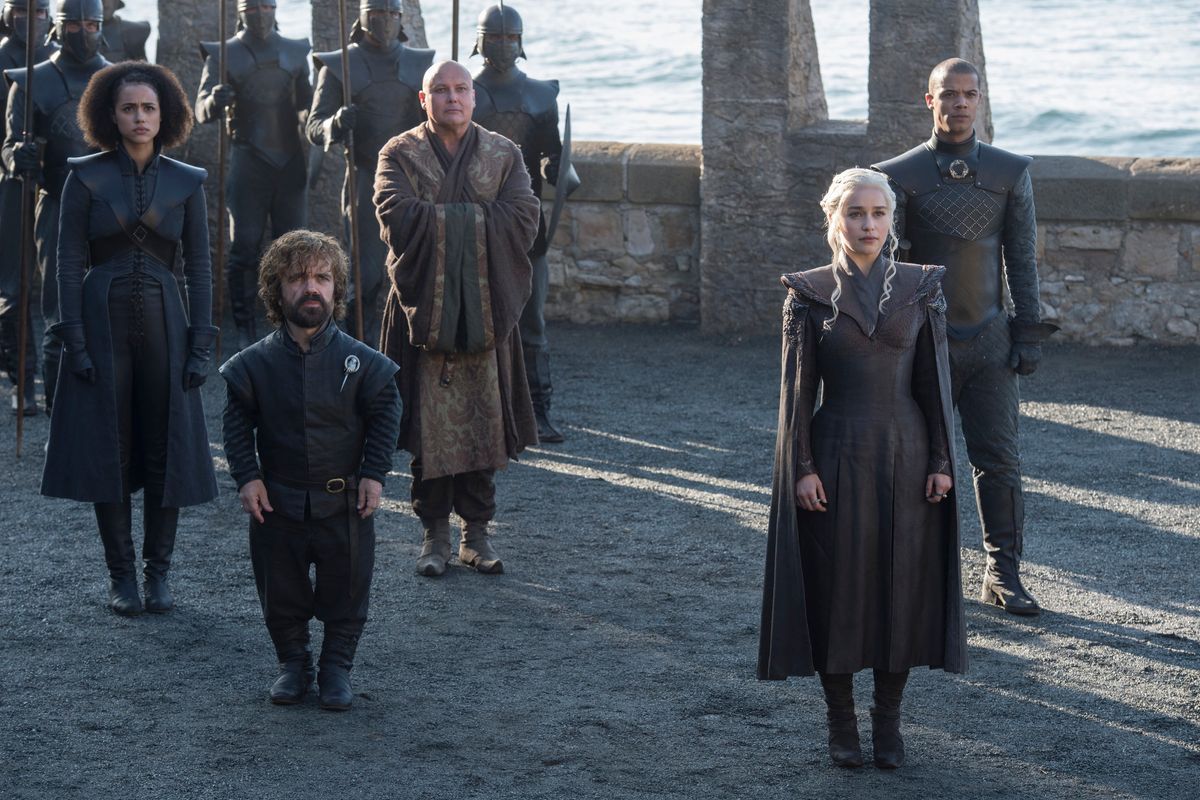 HBO has released the newest trailer for the upcoming season of Game of Thrones. The trailer has your favorite characters in Westeros along with ice-cold snow (winter is here), Lannister armies clashing with Dany's unsullied soldiers, and of course, massive dragons. As a reader of the books, and a watcher of the show, here are my predictions as to what will happen this upcoming season.

1. The Stark children will finally come together, but it will be much different. Sansa and Jon are already together, while Bran and Arya are heading North. It's a matter of moments before they reunite. However, much is changed. Last time they were together, Arya and Sansa were on bad terms, and I believe there will be continual tension. As Arya returns as a faceless assassin, she will be jealous of Sansa becoming the Lady of Winterfell. Arya will feel constrained and restricted since she is technically still a young girl. When she was on her own, she could fight and kill whoever, and do whatever she wanted, but with all of Jon's soldiers and his new authority as King in the North, I doubt anyone will take her serious.

2. Bran will control a dragon. This is one of the most common theories, and I believe every bit of it. Since Bran is the three-eyed raven, he should be able to control any animal. Since Dany is in Westeros with her dragons, I'm not surprised that he wouldn't take the opportunity. Also, all his life, he was taught the terrors of the Targaryen's and their dragons, and I feel like Bran would try to control one out of fear, taking sides against Dany if possible.

3. Dany's hand maiden Missandei will betray her. We all know Missandei, the slave girl who was Dany's translator in season 3, then became her left hand throughout the season. Well, in the books, and television shows, Missandei is considered young, and wise beyond her years. She knows many languages, and has an uncertain back story. There is a theory that she is a Faceless woman. After learning that the Whitewalkers are coming, Missandei will advise Dany to ditch the Iron Throne and help at the Wall. After Dany's refusal, Missandei will take matters into her own hands, by trying to steal Dany's face.

4. One of the Stark Children kill Baelish. Petyr Baelish was never a trustworthy man. In the trailer, you can see Jon Snow throwing Baelish up against a wall, furious for some reason. I believe this season, we will see Baelish try to make a move on Sansa, trying to harm her in some sort of way. I believe Arya will kill him at the last moment, strengthening Arya's and Sansa's sisterhood.

5. The Ice Dragon is Introduced. George R.R. Martin has a novella called The Ice Dragon, and it tells the story of a little girl who becomes acquainted with the legendary ice dragon. The theory states that the ice dragon was once a real dragon, but was killed and transformed. The Ice Dragon has a zombie-like appearance, despite its majestic beauty and icy features. In this upcoming season, I believe Dany will send one of her dragons over the Wall to fight the Whitewalkers, and the Night King will slay the dragon, then resurrect it. In the trailer, it's clear that Jon and his forces are beyond the Wall, and I think Dany will trust Jon with one of the dragons. Eventually, the Ice Dragon will debut near the season finale, possibly making it the cliffhanger for the final season.

6. The leaders come together to catch a Whitewalker. No one besides Jon and his men seem to notice the Night King is on his way with, oh, I don't know, an entire army of undead. It's been told many times that the Whitewalkers can be defeated if all of Westerns comes together. There is a rumor that there is a dragon keep in Dragonstone, the same place where Dany now resides, and were Jon meets her for the first time. In the season, I think Jon will go North, catch a Whitewalker, and keep it in the dragons keep, gathering all the current leaders of Westeros of this reality.

7. Jon will team up with Dany and become a dragon rider. Jon is a Targaryen, but does he have the same abilities as Dany? Does he have the blood of the dragon? I believe he and Dany will team up to take down the Whitewalkers (maybe fall in love), and he will be attached to the dragons, perhaps Drogon in particular. The three dragons need three riders, so it's only appropriate that a Targaryen is a dragon's master.

8. Tyrion will reunite with Jaimie. It's only a matter of time before the two Lannister brothers reunite. Jaimie is leading the future armies, and Tyrion is clever enough to negotiate with high-ranking soldiers, which is exactly what his brother is. Perhaps Jaimie will even defend Tyrion if his soldiers encounter him.

9. Olenna Tyrell will be betrayed by the Martells before she can meet Dany. Olenna is the last Tyrell that really counts. At the end of season 6 she meets with the Martell's to make an alliance, siding with the Targaryen's. However, for readers of the books, it's well known that the Tyrells and the Martell's never got along, and have a lot of bad blood. The Tyrells were siding with the Lannisters at the time Prince Oberin got his face smashed in by the Mountain, so the Martell's may take their vengeance out on someone before the Lannisters. Unfortunately, Olenna may be that person who feels the Dornish wrath.

10. Jaime and Brienne will reunite. I ship these two so much. In season 3, there was friendship between the two; perhaps there was also romance sparking. Brienne is in the North. Although Jaimie is by his sister's side in King's Landing, I bet he would do anything to get away from her, just for a little while. If they don't reunite by the end of the series, I bet fans will be upset. But, in all honesty, who knows what will happen this season?