'Friends' Made Us Laugh, Made Us Cry, And Made Us Cringe With All It's Homophobia

'Friends' Made Us Laugh, Made Us Cry, And Made Us Cringe With All It's Homophobia

"Friends" is probably not as great as we remember it being. 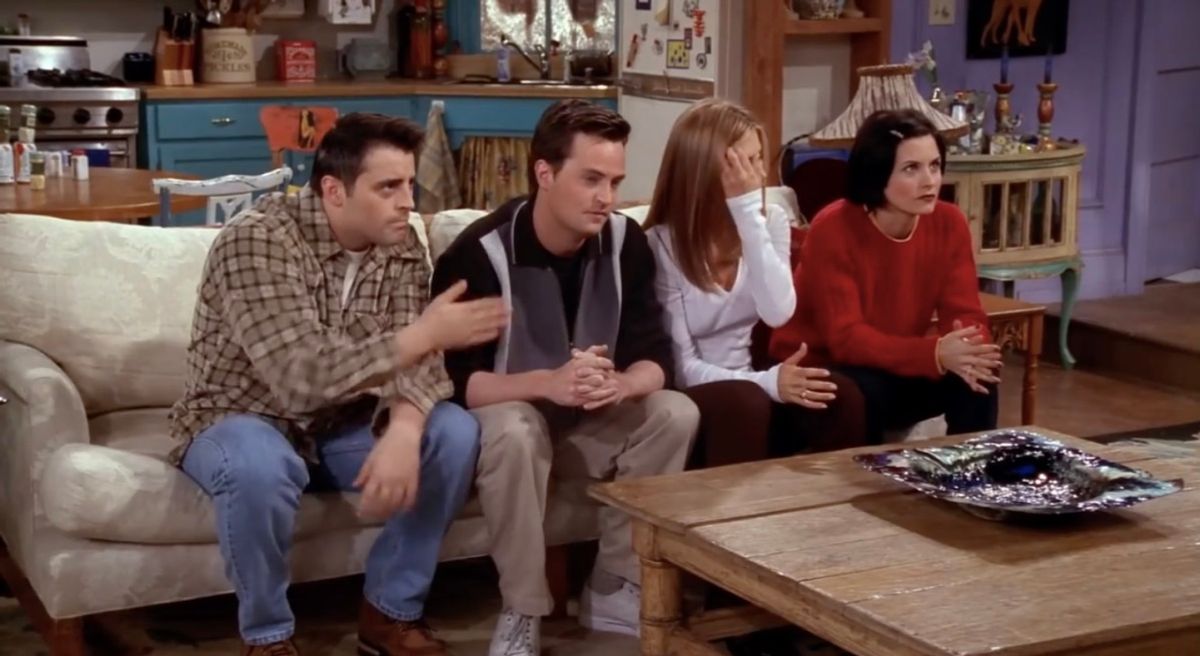 "Friends" is the cornerstone of the 1990s; it is a television show that completely defined an era.

"The Rachel" haircut, Jennifer Aniston's iconic and signature hairstyle on the show swept the nation and was subsequently rocked by Hollywood's biggest stars ranging from Tyra Banks to Christina Aguilera.

Tourists visited New York City in hopes of catching a cup of coffee at Central Perk (which was fictitious, albeit many were not aware of this) or visiting the street locations shown on Friends. There may be no other show of the modern era that has had such an extensive and continued impact on today's popular culture and on a generation of young adults the way Friends has.

With the show's successful run from the mid-1990s to the mid-2000s, the abundant reruns on TV and Netflix's immortalization of the series by introducing it to a new generation of young adults and teens by making it available for online streaming – there is no doubt that Friends has become a long-lived, perpetual part of mainstream culture and undoubtedly even of millennial culture.

But with this latter revival of Friends through the popular streaming app Netflix, many of today's young adults, and even viewers of the past who have rewatched the series are having second thoughts on it and raising critical questions on certain aspects about the show.

I myself, a lover of Friends and someone who consistently binge watches the series, am critical of some of the main issues that are often overlooked with the show.

Firstly, and mainly – Friends has a serious problem with diversity. The show's main characters are all white, and so are all of the secondary characters. Think about the people at the coffee shops, the main cast's love interests/partners – yup, no diversity, and it went on for a whole ten years.

The only character who ever had diverse significant others was Ross, but at no surprise comes the fact that this was a result of David Schwimmer's insistence to producers upon the latter. All of the diverse cast members, the very few, had short-lived appearances on the show.

Secondly, many of Friends' main characters often exhibited homophobic and transphobic behaviors. For example, Chandler can be found to often be severely concerned that he will be confused with a gay man, and he, along with the gang, often criticized his father who was a Vegas drag queen for wearing dresses and for being transgender.

Although the incredible lack of racial diversity on the show as well as the palpable homophobia and transphobia in some episodes are the most worrisome issues, the show has also been targeted for being sexist – like when Rachel hired a young man simply because he was attractive – as well as for body shaming, as Monica often was made fun of by the gang for her past when she was known as "Fat Monica."

The ugly truth about Friends is that, albeit we may look back on it fondly and consider it a classic staple of our popular culture, it is not as great as it was once perceived. However, this should lead us to consider that times have changed and perhaps even to use it as an example (compared to sitcoms now) of how far we have come.

It is still hilarious, and it is still legendary – and to acknowledge its flaws and its issues does not mean that we can't continue to love and cherish it.