Why Are Topless Men So Accepted Vs. Topless Women?
Odyssey
CurrentlySwoonLifestyleHealth & WellnessStudent LifeContent InspirationEntertainmentPolitics and ActivismSportsAdulting
About usAdvertiseTermsPrivacyDMCAContact us
® 2023 ODYSSEY
Welcome back
Sign in to comment to your favorite stories, participate in your community and interact with your friends
or
LOG IN WITH FACEBOOK
No account? Create one
Start writing a post
Lifestyle

Why Are Topless Men So Accepted Vs. Topless Women?

As the “Free The Nipple” campaign questions, what is more obscene: violence or a nipple? 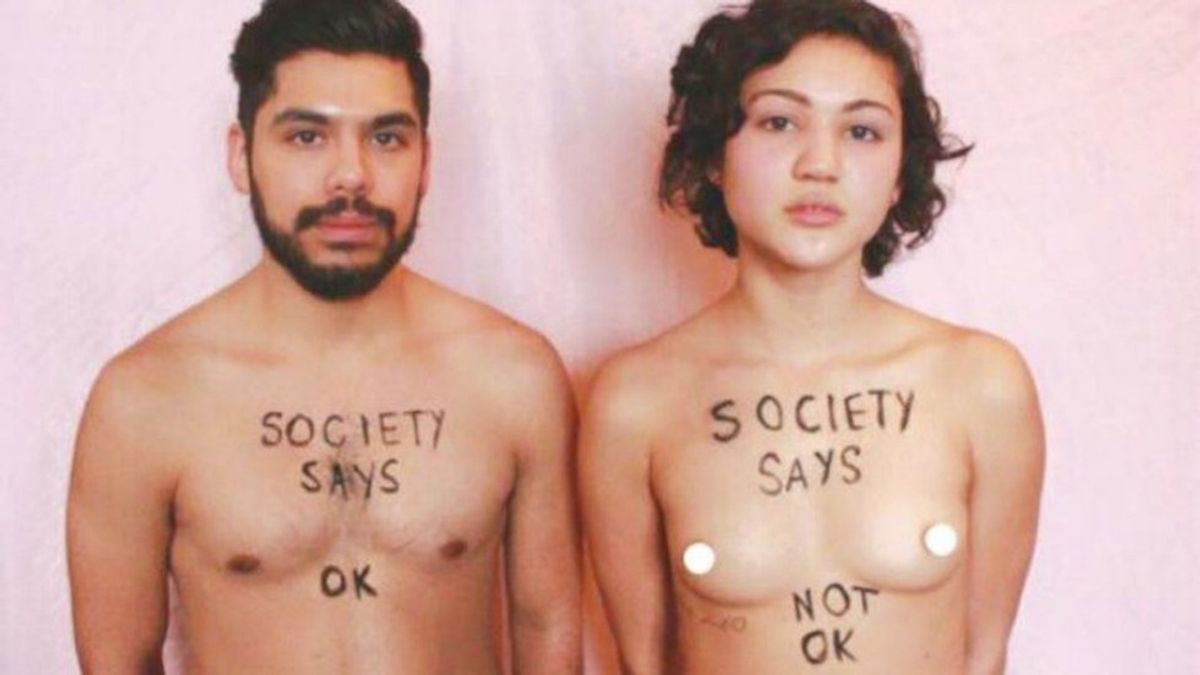 So there I was, sitting on my futon, researching topics to write about for this week’s article, lounging around in my PJs and thinking about how uncomfortable my bra is. I just thought, “Well, good thing I’m alone in my room so I can just take it off!” Then I got to thinking, thinking about nipples. *GASP*. Just a common thought that I know many of you have had, whether or not you’ll admit to it. One of the main things I, and many others, question about the female anatomy is: why are our nipples classified as lewd? Why is a topless guy so much more different than a topless woman? Because we make it different.

Across almost every media platform, women have always been oversexualized. This is not to say that women and men should not celebrate the fact that we are sexual beings, but the human body is made for so much more than to be looked at as a sexual object. Yes, people may become aroused at the sight of a naked woman, however, some laws in place in today’s society are based on preventing women from arousing men instead of preventing men from behaving inappropriately once aroused.

The fact that in certain states women can be charged as sex offenders if they dare to show their nipples in public is astonishing to me! In 2015, after some of her personal pictures online were censored, an associate professor and artist from Chapman University, Micol Hebron, created a photoshopped male nipple.

The photoshopped nipple quickly went viral and women from all over began using it. Crazy how that’s legally allowed on platforms such as Instagram, right? But god forbid you show a woman’s! These pictures portray the irony quite nicely.

Now don’t get me wrong, I’m not saying that if some magical super movement of the people caused all laws regarding female nudity to be repealed would then make me take my top off— I wouldn’t. I simply wouldn’t feel comfortable, but that doesn’t mean that I don’t want the choice. There is a time and a place for everything, but people should have a right to be mindful of their own bodies.

As the “Free The Nipple” campaign questions, What is more obscene: violence or a nipple?
Report this Content
This article has not been reviewed by Odyssey HQ and solely reflects the ideas and opinions of the creator.

Nicole Marie Nigro
Individual Creator
6883
c1.staticflickr.com
Where to start...... Let me start with the cliche that life throws us curveballs and what we do with it is what counts.