Societal Norms Reign Supreme in "Four Sisters and a Wedding"

Societal Norms Reign Supreme in "Four Sisters and a Wedding"

What is the meaning of this? 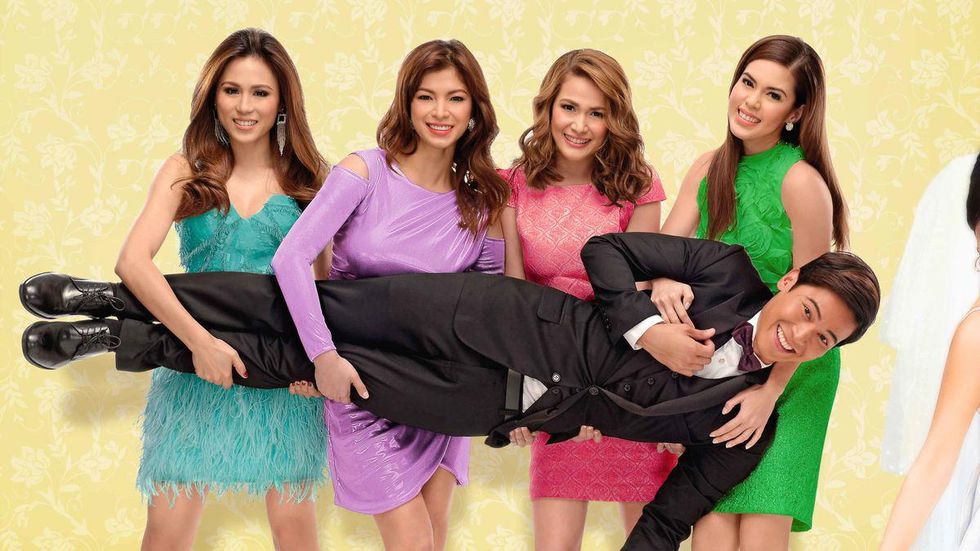 Four Sisters and A Wedding is a film that haphazardly threads societal expectations and norms into it regardless of how well they fit with the characters and the situations they're in. Characters with no discernible romantic chemistry end up a couple, a high-powered executive overestimates exactly how big a sacrifice she's making in the name of her family, and a flashy woman is redeemed in the eyes of the audience solely for embodying ideals that women are supposed to have.

Shame and accomplishment are huge themes in this movie. This is illustrated when Princess' family comes over for game night and Mrs. Salazar proudly points out the wall of all the accolades her daughters have racked up. The certificates are lined up on the wall, and Alex doesn't have as much as the other three. There's this sense of embarrassment and shame because she's not as accomplished as her sisters. In their family, there is pressure to achieve, to be at the top of the class, and to get the most medals and awards not only to make the family proud and somewhat compete against their siblings but so that your parents can brag about them to their friends.

In the argument at the climax of the film, second eldest sister Bobbie says she only went overseas so that her sister Alex could have her dream job in film and also to take care of her mom's hospital bills. The theme of sacrifice is supposed to be apparent, but it's not as if it's that much of a sacrifice. She's a marketing executive in New York City- a much coveted job. It's a job that pays well, is somewhat creatively fulfilling and she's not doing any hard physical labor unlike Teddie. What's wrong with having ambition and wanting to do things for yourself? It's okay for her to enjoy her job without being so apologetic about it.

Teddie should have had those lines because she was the one working as a maid, and a waitress at a bar. She was the one working multiple jobs that didn't even fit her degree, sending money back home while doing so. Teddie was supposed to be a teacher in Spain but there was a recession and she was laid off but she didn't want to disappoint her mother. There would be a sense of shame if her family found out and even more if people outside the family found out. It would be especially embarrassing because out of all the siblings, she was the overachiever and they all expected her to be doing well.

The movie, in addition, enforces gender roles, and the idea that a woman must be modest, quiet, and non-flashy to be worthy of respect. We're supposed to think the mother-in-law is ridiculous, with her ideas for the bridesmaid dresses being over the top Lady Gaga-esque sea themed frivolity- more camp style than traditional wedding. This gives off the idea that women should be simple, low maintenance and humble to be worthy of respect, and if not then they're scorned and made fun of. The father, in addition, insists CJ sign a prenup when they're all at the dinner table, insulting the Salazars. The only thing that makes Princess sympathizable with the audience is that she really wants a low-key wedding deep down, is embarrassed by her parents' gaudy behavior, and is a good cook, offering to make breakfast for the Salazars. The film shifts the blame to the parents so that we'll think, "Oh, it's just the parents being ridiculous- the girls are being too hard on her." This is supposed to emphasize the overprotectiveness of the sisters and show that Princess is a woman worthy of CJ after all.

When searching for another girl for CJ, someone more "respectable" who fits their standards, Teddie disparagingly comments "Not someone who wears a disco ball to dinner" .We're supposed to see that the sisters are overreacting and Princess is actually a nice girl because she prescribes to the stereotypes. What is she wasn't a good cook? What if all the extravagance was her idea, rather than her parents'? Would the film still want us to sympathize with her?

The main romance seemed very forced to me. Teddie ends up with a guy even though they were basically friends the whole movie. She had to borrow money from him in order to go home for the wedding, and he only agreed if he could come and if she introduced him as her boyfriend.They mostly have comic relief moments together, such as trying to prove that Princess' family's spa secretly had prostitution since they advertised a "happy ending." She thought of herself as better than him because she came from a well-off family and she had years of education and advanced degrees. She had a college degree in teaching and it didn't matter if she was a maid; she still believed she was meant for more and didn't really internalize that identity. Then she finds him playing with orphans and discovers he was in an orphanage and somehow that's a turning point that helps bring them together. There wasn't even a romantic vibe between them. It just felt like the movie used a sob story to get them together. She could have learned to respect this guy as an actual friend by seeing his struggles and how people come from different walks of life but they're still worthy of respect. It's as if the movie couldn't make it possible for her to suddenly embrace a new point of view unless it comes by way of a love interest. They could have just found common ground and remained friends, and with Teddie starting to this guy as an equal, rather than someone who is beneath her.

Similarly, Bobbie is pressured by her boyfriend to get married within a certain time frame . It's as if their relationship has to have the "married" label on it to be valid. She obviously loved him and wanted to be with him, since she wanted to continue the relationship and brought him with her to attend her brother's wedding. She was unsure of marriage and especially with a daughter who didn't like her and wasn't used to her.

If you watch this movie, you'll definitely get a sense of the values of the people creating it and the ideals that they want to impose on the audience, and the assumptions they assume the audience will make based on the societal norms already instilled in them.