From the Inside Looking Out: The Unexplainable Nature of Fish Camp

From the Inside Looking Out: The Unexplainable Nature of Fish Camp

Fish Camp is much more than a freshman orientation program, but describing it perfectly can be very difficult. 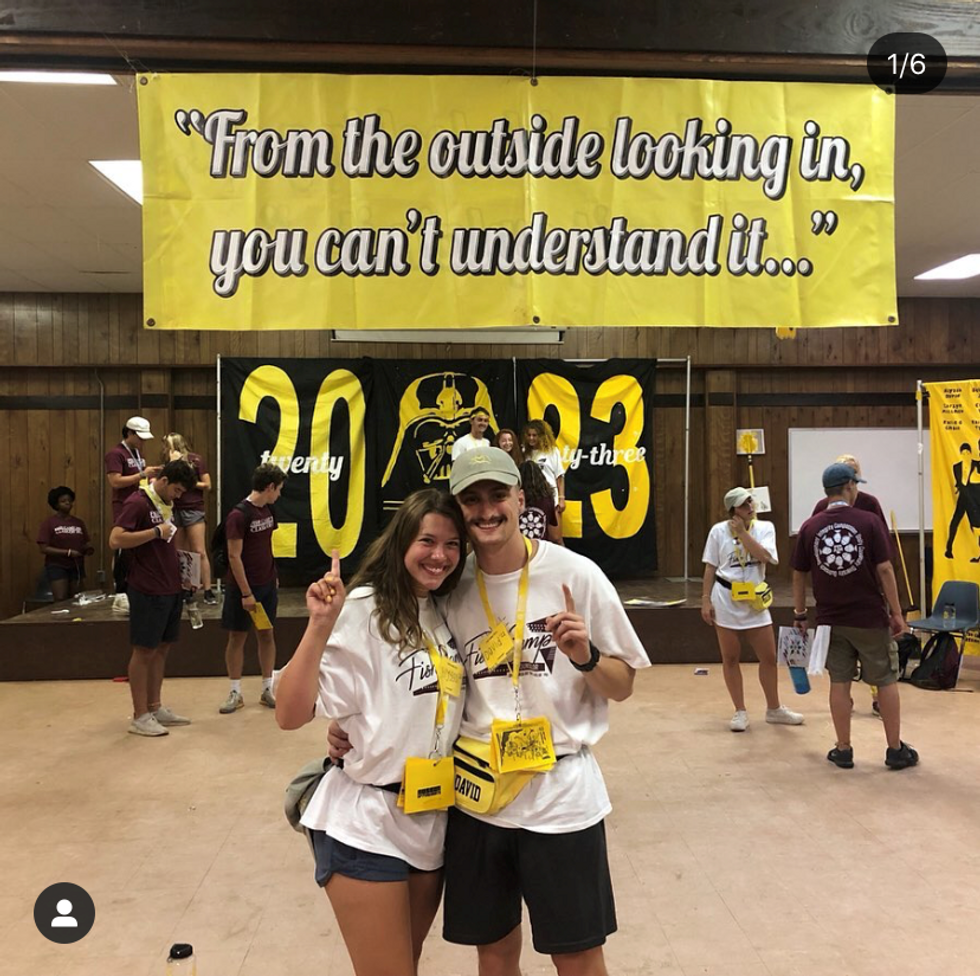 One of the beautiful things about the English language is that there is a word to describe almost any object, event or feeling. Sometimes, however, we find ourselves unable to perfectly summarise something, no matter the collection of words we come up with. When trying to describe the Fish Camp experience, far too often there is a rift between what we feel and what we are able to say. It is almost impossible to bridge this gap, but it would be beneficial to at least try.

For anyone that has no idea what Fish Camp is, it is Texas A&M's student-run freshman orientation program that happens in late July and early August. Attending Texas A&M inevitably involves you in a plethora of different traditions, and Fish Camp is an Aggies's first one. The formula is simple: there are seven sessions, each of which consist of seven different camps that embody their own color. These camps are made up of anywhere from 100 to 250 freshmen, 24 counselors, 2 co-chairs, and 1 namesake. They all travel to Lakeview Methodist Conference Center for four days and three nights to learn about A&M and get ready for the new year of school. How can an experience so seemingly straightforward be so hard to quantify?

Perhaps the banner that hangs in every camp room summarizes it the best. On one side it reads: "From the outside looking in, you can't understand it…" and on the other side: "From the inside looking out, you can't explain it."

Being up from 8 am to midnight for four days in a row, performing skits with colorful hair and piercings, all while you try to change one to two hundred incoming freshman's lives can sound like a strange and tiring thing to do. However, when you are at Lakeview, it is not weird at all. In fact, the few days I have been at Lakeview have been some of the most energy-packed of my entire life. It's almost as if you drive through a rip in time and space while on the bus and are transported to some alternate dimension where adrenaline is constantly being pumped through your veins to keep you going at all times. While you are not actually transported to another dimension, the feeling you get at camp is still real, and the metaphorical trip through a crack in reality is achieved in the 5 months leading up to camp.

Between the time you meet your camp and the time you go to camp, you get closer than you previously thought was possible. You aren't just close friends. You feel like a family. These are people that you have known for maybe 5 months and yet it feels as if they have been by your side your entire life. Part of it is because everyone is brought together through a common goal of changing freshman lives. Part of it comes with the pride in knowing you all represent your namesake in everything you do. Most of it has to do with the environment your camp creates. From the beginning, it is made known that love and acceptance reign supreme and between the road trips, work weekends and the four days before camp, you talk to people in your camp about things you might have never discussed in your life. Memories are made, inside jokes are formed, and the resolve in changing freshman's lives is cemented. The closer your camp is, the more inspired you are to go all in during the four days of camp, the more special each freshman's experience is, the more likely they are to apply to be a counselor and do the same.

When my parents ask me why I do Fish Camp and I tell them that I want to change freshman's lives and make friends, they respond with, "that's nice, but why don't you get an internship instead." My response to them is that you can only do Fish Camp so many times, but you can get a job for the rest of your life. If it came down to choosing between a job opportunity and getting to live through another Fish Camp experience, I would choose Fish Camp every time. My parents then proceed to call me crazy, but that is understandable. After all, they are on the outside looking in.