How Do We Fight Rape Culture?
Odyssey

How Do We Fight Rape Culture?

What needs to change? 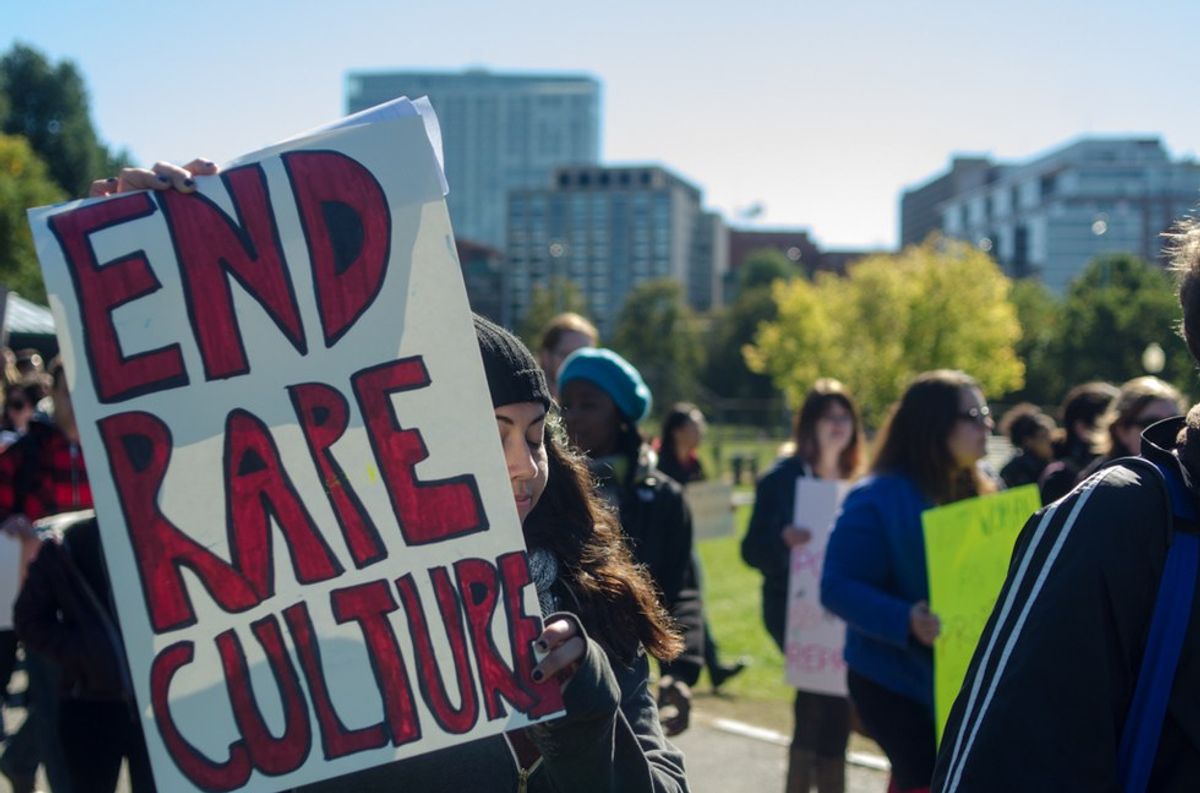 There are a lot of ways that our society contributes to rape culture, or the false ideas about men’s and women’s sexuality that lead to demeaning objectification, fear, exploitation and rape. Rape culture makes it ok to value or disvalue someone only for their body, to use language that does nothing but hurt, and to pursue sexual satisfaction is whatever way one wants, regardless of how it affects someone else. People often focus on how rape culture affects women, but there’s also a heavy effect on men. It puts a pressure on males that shouldn’t be there. It puts pressure on our brothers, sons, guy friends and dads to conform, “man up”, prove themselves, and give into cultural pressure.

There have been lots of things written about how we contribute to rape culture, through the language we use, how we treat men and women, and what we teach or don’t teach in schools. We’re coming to recognize the little things that hurt. But how do we turn that around? How do we fight rape culture instead of perpetuating it? I think that there are a number of things we can do, big and small.

First off, stop consuming media that promotes objectification of women or men and wanton sexuality. I wrote about this last week, but more and more of the media that we see and hear today has much of the same effect as porn. We’re saturating our culture in sex, but not in love, and it's not just because media producers are bad, it's because they're supplying to meet a demand. I remember when the movie Fifty Shades of Grey, based off the book, came out I had this desperate hope that it would open in theaters, and be a complete flop. No one would be in the theaters. Not a dollar would be made. I was disappointed though, as it made 85 million in the box offices the opening weekend, and looking back it’s not surprising. Movies like that feed off and into our unrealistic and guilty sexual desires, and they’re popular.

Recently I went to a music festival, and one of the artists performing was Jason Derulo. By the end of his set I was sick, not only of his attitude towards women, but of that attitude in general. “Where are all my single ladies?” the announcer in between sets would yell. “All my sexy ladies get loud!” was a common theme from Derulo. Why? Why no shout out to the single guys in the crowd? Why would I want to scream and cheer as you’re objectifying me? It’s offensive. But still, thousands of girls raised their hands and screamed back. Blah. The female dancers danced seductively while male the dancers did the actual dancing that wasn't intended to just highlight their bodies.

The style of music is popular and speaks to an over sexualized generation’s experiences, or at least their desires. Music is powerful, and raises powerful emotions. Pairing sensuality and music is dangerous. There’s a culture around this style of music that objectifies women and makes promiscuity stylish. Asking people to stop consuming this music is hard, because it’s such a big part of our culture. But try it. Demand good music that doesn’t encourage objectification and sexualization. The media we consume makes a difference and defines the culture we live in.

Second, don’t use the language the contributes. Don’t call anyone anything you wouldn’t call your grandma. Don’t objectify girls or guys. Just don’t. Talk about sex, but not about people as objects of sex. Maybe it’s a joke, but it promotes the mindset. It says that it’s ok to think and that way and then act that way. Its says that it’s not a big deal.

Third, ladies, stop saying sorry unless you actually are. Women are taught to be polite, submissive, and quiet. We’re kind of moving away from that in our culture, but still, there’s a mindset among women that they should take the backseat, play second fiddle, and apologize for everything. Don’t apologize for your ideas, or for saying someone is wrong or for explaining why you’re right. This is a little thing, but it fits into the mindset. This skit shows how ridiculous this can seem when taken to an extreme. But it actually is ridiculous sometimes. For a lot of us women, this is a habit. Think about it, and notice where you apologize when you don’t need to. Break out of the mindset of submission. The only men that women are called to submit to are their husbands, church leaders and dads. If a guy is none of those, you have the right to your opinion as much as he does.

Lastly, remember where sex belongs. The opinion that sex belongs only in marriage is an unpopular one. More and more we’re encouraging teenagers to experiment, and to practice safe sex. But it’s not working. Often, once they get the safe stuff down they’re ready to move on. Once we bring sex out of committed relationships and into the recreational/hook up arena, rape becomes more normal and acceptable. It’s no longer an outrage or a surprise. This is where rape culture begins. There’s a reason sex was made for marriage and marriage alone. By encouraging it outside of that, even in the sense of being “safe”, we’ve encouraged sex for fun, rather than for connection and commitment.

When I started writing this I felt kind of hopeless. Not many people will read this probably. There’s no way that this will cause a nation wide change that will end rape culture. But it doesn’t need to. If you read this, and share the ideas with your friends and your school, and then put it into practice, then that’s one place where rape culture starts to die. That’s one community where people feel a little bit safer, a little less objectified, a little less pressured. And that makes a difference. Maybe it doesn’t stop rape nation wide, but maybe it makes a difference in your friend’s life. Or in your little sister or brother’s life. Or your roommate or her sibling’s life. If it makes a difference at all, it’s worth it. So put it into practice. Make a difference, even if it’s just in your friend group.