Even After All This Time, Snape's Obsession With Lily Is More Problematic Than Romantic
Odyssey

Even After All This Time, Snape's Obsession With Lily Is More Problematic Than Romantic

Maybe "never" will be our "always." 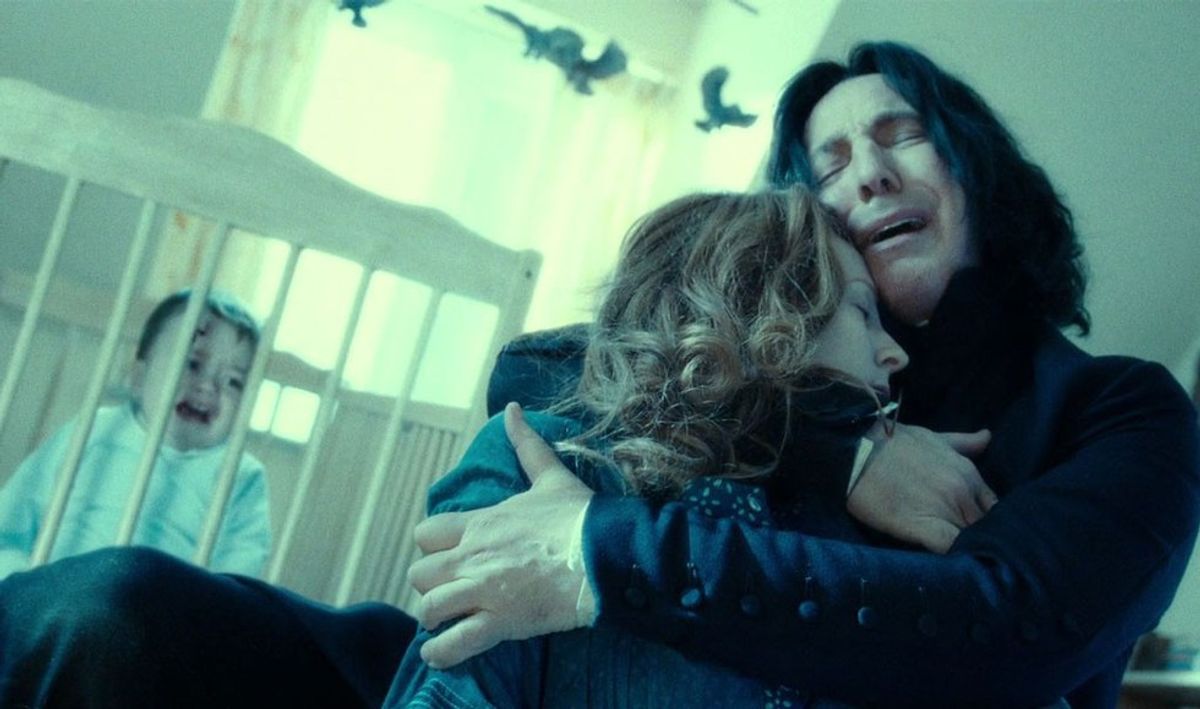 Most "Harry Potter" fans have seen the memes, montages, and movie clips dedicated to Severus Snape's star-crossed, celestial incessancy for our hero's mother, Lily. His Patronus, a charm requiring one's most positive connotations for its conjuring, is still associated with memories of Lily over a decade after her death. Severus Snape's longing proves to be packaged in misogynistic entitlement many times throughout the series.

Snape's "tragic" backstory is revealed throughout the series in flashbacks, through Harry's occlumency lessons and quite a lot of the Golden Trio's meddling. Harry's mother was Snape's oldest, and often only, friend. He fell for her, a girl with eyes the color of April and a gait even God couldn't conjugate correctly, irregular as autumn and omniscient as every almost. However, we forget that love doesn't entitle him to any kind of absolute. Snape joined what is the equivalent of the real world's Ku Klux Klan— the Death Eaters cannot be defined as anything other than a hate group. Lily, being muggle-born, stood out as one of the main targets of hate crimes in the wizarding world. To make matters worse, when she confronted Snape about his involvement with the Death Eaters, he lashed out and spat a slur at her. While it's true that Harry's father, James, did jinx and ridicule Snape as a teenager, it never went further than that. He even saved Snape's life when his best friend, Sirius, decided to pull a perilous prank. This stands in sharp contrast to Snape, embittered for the rest of his life, bullying his students as retribution even years later, going as far as making 12-year-old Hermione cry over her teeth and threatening to kill Neville's pet in front of him.

What borders on single-minded obsession with punishing those who "hurt" him consumes Snape for the length of the series. In the third installment of the series, Snape does everything in his power to ensure Remus Lupin, an old friend of Harry's father, loses his job in a world that offers little opportunity and many trials. As a werewolf facing discrimination as a result of Jim Crow-esque laws, teaching at Hogwarts was one of precious few options for supporting himself. When Lupin had to take off to transform, Snape spelled it out for the students in the infamous "turn to page 394" scene, assigning them a paper on werewolves and how to fight them. Although Hermione was the only one to equate the unusual subject matter to Lupin's monthly absences, attempting to expose private medical information like that over a teenage grudge shows how emotionally stunted Snape is. Imagine Lupin coming back from his painful sabbatical to read a series of essays from his students about how to kill him. These actions show a blighted being bumping through life's suddenness. James, the man Lily chose over Snape, defended friends and enemies alike. James laughed with Lily. Love, while lurid as eternity, isn't a contract of ownership.

It's time we stop lauding Snape as a sallow Capulet and accept that Lily doesn't owe him requisition. Lily doesn't even owe him friendship. She doesn't owe him anything. No one forced her to marry James— she chose him, not Snape. She chose the man who died for her and their son, who risked expulsion to ease a sick friend's loneliness, who gave his best friend refuge in his home growing up and laughed with him every time they came together.

Snape only protected Harry due to unhealthy infatuation, unable and afraid to let go of Lily. He didn't care if the two people she cared for most in the world died in front of her, as long as she would be his for the taking after.

He loved her and loved her, but he was already an echo of empty, crying behind closed doors and wavering between the unopened letters warping in the wardrobe.

And she still doesn't owe him a damn thing.