Wake up, smell the coffee, and get a reality check. 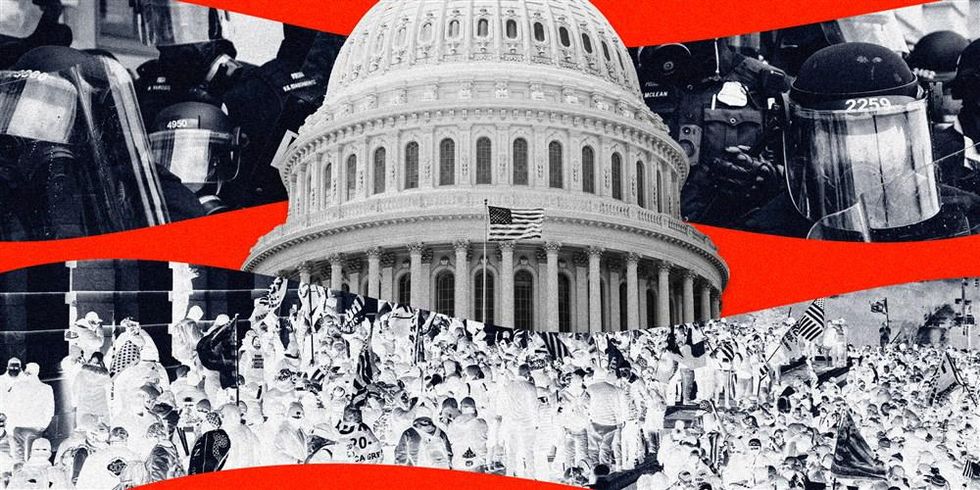 Over the past two days, I have been in an extremely foul mood over what has happened to my country. And since everyone is on their soapbox at this moment, allow me to use mine. It's something I made back in the 7th grade with the help of my English teacher from St. Philip Neri, Mrs. Burns.

We all know what happened on the news. We all saw videos across the WWW about Trump supporters breaking and entering into a sacred institution of government in a piss-poor attempt of a coup d'état. They might be born American, but they are not Americans, and are terrorists who committed treason in the heart of our country. We watched them attempting to break the windows of the building. We watched them trashing the place, like a fraternity after a pledge party with cheap liquor. We watched as Richard Bigo Barnett, a bragged about residing in Pelosi's office, and stealing her mail.

Ultimately, that was the darkest day of modern-day American, something that you would find littered across all dystopian books in a middle-school library. Pipe bombs and Molotov cocktails found and destroyed. Four people died that day, one of them being a protester who was fatally shot by police for attempting to breach and assault police lines. I praise them for protecting the officials, but I question the police's integrity. The security around one of the most important events in our country's democracy was complete shit, compared to the effort they placed against those in the #BlackLivesMatter Movement—which was plagued by excessive violence against peaceful protests. If the terrorists were POCs, instead of White, the outcome would have been redder. Which unfortunately shows the privilege of skin color. Which is why Capitol Police Chief Steven Sund is resigning at this very moment to save his ass.

The consequences have been drastic and immediate. We are being looked down upon by every country in the world, who question our own liberty and integrity. We are now even more divided ever, to the point where the only way to succeed as a nation is through flipping seats. We now have a new event to add towards the history textbooks for the future generations, wondering how in the world we managed to fuck up so much in 5 years.

This was not a just a riot, this was an insurrection, a rising, revolt against civil authority, that Trump and co. have been leaving breadcrumbs for, through months, and months, and months of sedition. And they thought less of it. One of the main methods was through the constant accusations of voter fraud, voter suppression, voter intimidation, and the constant rejection for the official results of the electoral college, by members of the GOP. Examples include, Ted Cruz, Kelly Loeffler, and our very own James Lankford. Go figure.

As I proceeded to stay up until 3:00 AM to watch the entirety of C-SPAN's coverage, I watched as Republicans attempted to objecting other state electoral votes, and each time, being put down, because they did not have the precautions to do so. Presumably out of spite and stagnation. Miraculously, voting went as scheduled, and Biden and Kamala are now our official presidential-elect and vice-presidential-elect respectively, with a score of 306-232.

Which brings me this: How much are you willing to sacrifice your morals for the sake of success? Which elected officials fight for the people, and who fight for their own bank accounts? Who takes responsibility in progressing American democracy, and who seeks to play golf? Who seeks to build up everyone, and who decides to stick to ad hominem? Who seeks to expose corruption, and who decides to justify it because they because they directly benefited from it?

How are people justifying a man who: (A) brags about sexual assault; (B) constantly denounces the truth as "fake news"; (C) cannot condemn white supremacists and calls black protesters "thugs"; (D) embarrasses us on the global stage; (E) downplayed this virus, as we suffered the consequences and lost our loved ones; (F) pressured Georgia officials for votes; (G) separated and forced children to live in forsaken border camps; (H) has inexcusable taxes for a business man; (I) childishly torments rivals on social media, (J) created the longest government shutdown in the history of our country, and (KKK) christened the DC mob (terrorists) as "special people".

A once-great person once said to me "Sometimes you need to pull out the weeds." Trump has poisoned our country for too long, and it is time to hold him, as well as those who continue to enable his behavior, accountable. Because if you have to justify someone's bad habits, like committing treason against the United States of America, you are allowing weeds to fester.

And it's time for renovations, come January 20th.