Elvis Brought People Together, And So Does His Biggest Fan
Odyssey

Elvis Brought People Together, And So Does His Biggest Fan

“Elvis sang from his soul and captured the whole world.” 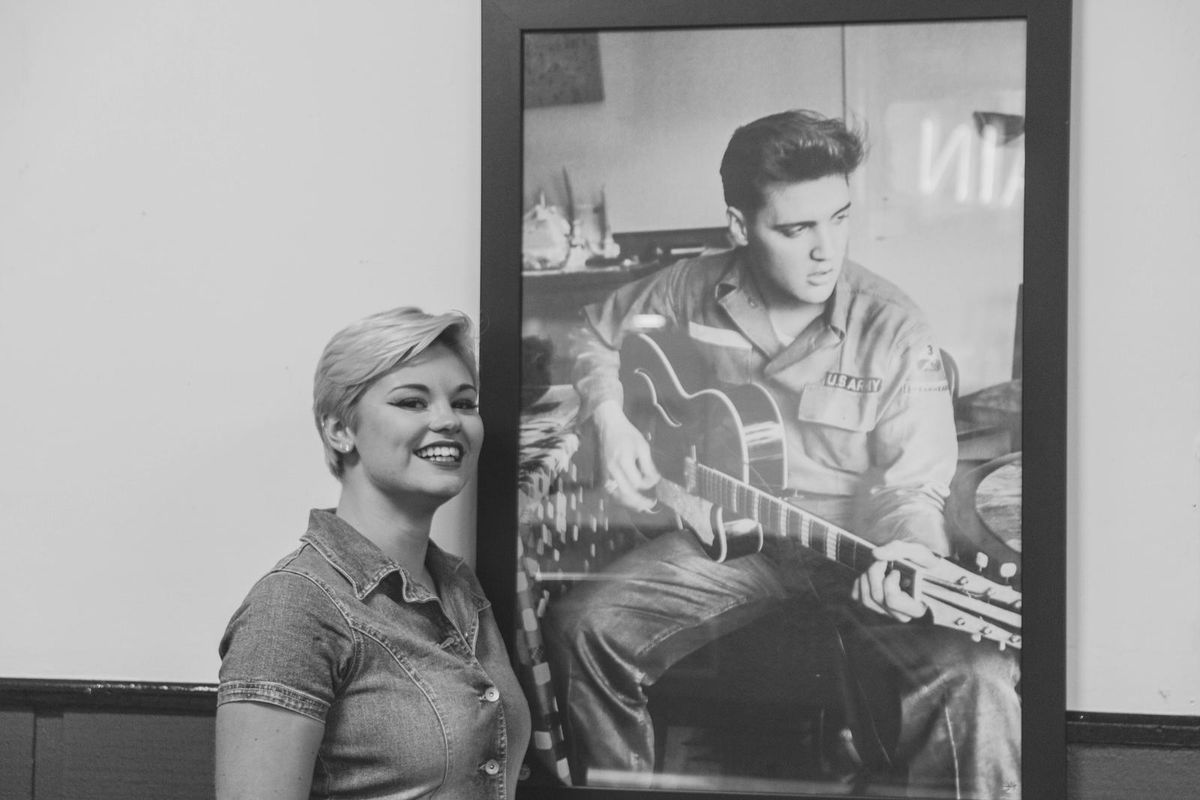 Whether you know him by his eccentric jumpsuits, cool cat cars, or smooth baritone vocal chops, Elvis Presley’s memory is still very much alive even decades after his death. He started as a nobody with Sun Records, went on to record over 800 songs, and earned himself the prestigious title of “The King of Rock ‘n’ Roll.”

One of his devoted, and perhaps youngest, fan is Amanda Lyn, a local rockabilly artist. What exactly is 'rockabilly,' you ask? She describes it as an early form of rock 'n' roll, merging '40s and '50s country western music with gospel and R&B from African American traditions. "It broke down racial barriers that existed in music in the South during the 1950s.” Amanda’s work is directly inspired by this style including artists like Elvis Presley, Johnny Cash, Carl Perkins, and more.

Being in her early 20s, I was curious how she found such an admiration for such a role model. She was simply curious, describing her fascination as a ‘snowball effect.’ She attended her first Elvis Festival a few years ago and coincidentally met a couple who eventually hired her as a backup singer for Colorado concerts (pictured above) featuring Cody Ray Slaughter, Graceland's 2011 Ultimate Elvis Tribute Artist. She came to learn a saying: “If you’re an Elvis fan, no explanation is necessary. If you’re not an Elvis fan, no explanation is possible.”

Amanda Lyn gushed about Elvis Presley’s genuine heart and inspiring attitude. “Pretty much all the odds were stacked against him. He was poor, had no formal training in music, and was driving a truck for a living when he hit it big… The crazy thing was he didn’t set out to be a rebel, he did it just by being himself.” His charisma and voice caught Sun Studio’s attention and his provocative dance moves and incorporation of black music challenged what society called normal.

She praised the connections and friendships she has found in the Elvis community. Inspired by Elvis’s ability to bring all kinds of people together with music, Amanda Lyn collaborated with other musicians to help bring her musical stylings to life (pictured below): Matt Juliano (mandolin) and Justin Braun (percussion) are members of a local acoustic Americana band called Beemo, and myself (upright bass). Vital to the process was Wholehearted Productions, the studio responsible for the recording and post-production aspects of the process.

I picked the rest of the band’s brains about their experience working with Amanda and her unique style of music. Justin felt that “playing with Amanda was like stepping into a time machine. Her stylistic choices transport both performer and listener to the time of early rock and roll’s apex.” Matt, who has partnered with her for numerous live performances, came from a bluegrass and orchestral background. “I wanted to adapt [rockabilly] for the mandolin in an attempt to stretch myself.” Both guys and myself were thoroughly impressed and delighted to be involved.

Particularly inspired by the work done at Sun Studio in Memphis, Amanda decided to have one song on the E.P. be a live take with an accompanying music video. Nowadays, studios record each instrument separately to create literally perfect tracks. But as you may have realized, Amanda doesn’t care for following the norm. “I felt like it would be a cool challenge to try to do it like they did it back in 1955.” A surprise to the modern studio, Amanda actually wanted the imperfections of a live recording. “Elvis was pre-autotune and pre-photoshop. He just really was that good and that gorgeous!” When comparing the differences of recording technologies, she said “Sometimes I feel like the soul of the music is edited out. In the old recordings, you can feel the energy in the room, and I wanted to give people a taste of that on my E.P..” That live recording experience was where she and her musicians felt the real magic of her homage to Elvis Presley and similar artists of the time.

We all shared plenty of laughs and lessons learning how to help enhance her music. Matt says, “The main thing I learned about Elvis from working with Amanda is that he's really good. I understand the hubbub.’" Her E.P., Timeless, includes six original songs that follow her personal path of finding love with a cowboy. It will be available on all digital streaming sites and on her website this June.
From Your Site Articles
Report this Content
This article has not been reviewed by Odyssey HQ and solely reflects the ideas and opinions of the creator.