I Give My Money To Starbucks, But I Will Always Give My Heart To Dutch Bros.
Odyssey

I Give My Money To Starbucks, But I Will Always Give My Heart To Dutch Bros

Let's petition to have Dutch Bros. on every corner, okay? 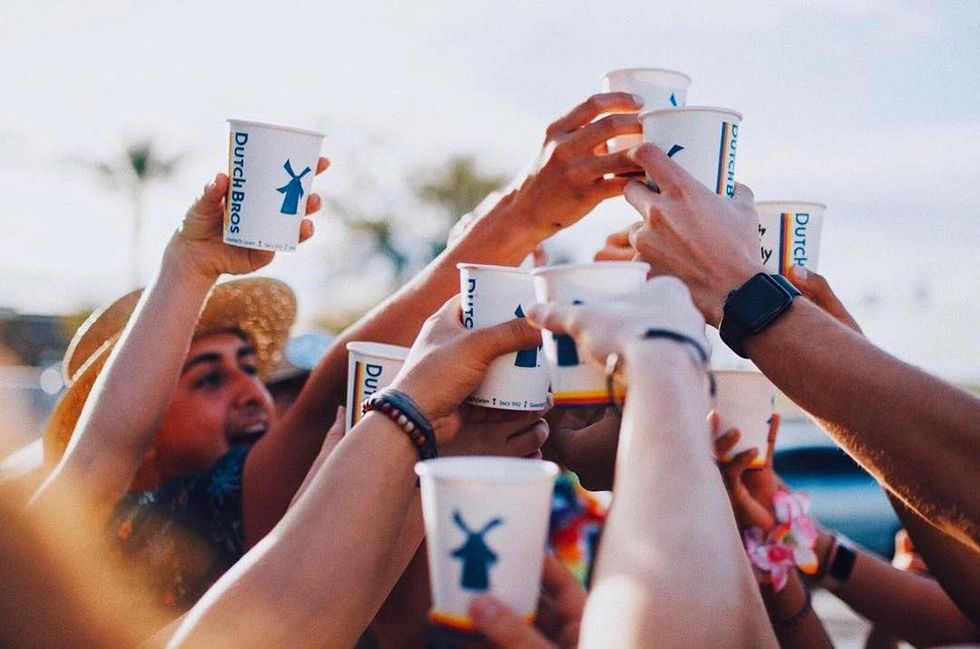 Despite the cliche gold star reward system, I never experienced this time of reinforcement in school. It was only a punishment for doing something wrong. So, when I first signed up for the Starbucks Reward Program, I had no idea that I was going to become obsessed with reaching gold status and then, getting my 125 stars for a free drink.

Basic Psych 101 can tell you all about positive reinforcement, but until you experience it while receiving gold stars for buying cups and cups of coffee, you'll never truly understand the evil genius behind it.

By now, I know that I have to spend roughly $63 dollars for a free drink, which is a pretty expensive free drink I might add. That's pretty much my venti iced latte purchased 12 times just to get one free.

I recognize the madness behind it, but yet I'm still throwing money at them any time I run out of coffee at home.

Because there's no other option that sits on every corner waiting to take my money in exchange for gold stars.

Now, brand loyalty is "the tendency of some consumers to continue buying the same brand of goods rather than competing brands." I wouldn't call this brand loyalty because if I had other options, let's say Dutch Bros, I'd most likely switch it up once and awhile.

Dutch Bros. has an even better reward program you might recognize as an old-fashioned "stamp card" where you fill up the card for a free beverage. It's a classic that still holds up I might add, but that's not what keeps people coming back.

Have you ever been to a Dutch Bros?

Better yet, have you ever been to a Dutch Bros in Phoenix?

Dutch Bros East Vancouver on Instagram: “⚠⚠ATTENTION DUTCH NATION!!⚠⚠ Do YOU want to win FREE DUTCH for a WEEK?!?! Then have we got a deal for you!! Follow the instructions below…”

My oh my! It changes your life.

Just recently, I went through my friends and I went through the drive-thru - something we've done millions of times. I, in the back seat, wasn't planning on buying anything. But we immediately struck up a conversation with the person taking orders and we learned that our hometowns are very close to each other. For anyone who knows the employees at Dutch, you know these are happy-go-lucky enthusiastic workers!

The customer service is absolutely incredible and I mean it's ALWAYS like this. I don't think I've ever gone to a Dutch and spoken with a rude employee. That's not saying there isn't anyone that doesn't fall short, but I'm saying that's been my experience.

And these people know that their ultimate goal is to get customers to come back. When I sat there and told this girl that I wasn't planning on getting anything, she promised me that she was "hooking us up."

Homegirl, if you're reading this - I love you!

We drove up to the window where we learned that all of us were getting free drinks.

As we drove away and passed a couple Starbucks on the way because they're literally on every corner, I couldn't help but think to myself that it would never have happened if I was at a Starbucks.

Starbucks doesn't have to care because they have millions of loyal customers getting their caffeine fix every day. They shouldn't care about the ONE person that chooses to not get a drink that day.

That's where there's a difference between the two, Dutch does care. They built this franchise on this culture of coffee and people. Their story, their commitment to their social responsibility, their loyalty to their customers - that's something I can get behind.

I may give my money to Starbucks because they're accessible and crazy, mad geniuses, but I give my heart to Dutch Bros forever and always.

If only they were closer to the Los Angeles area, I'd give not only my heart but my money too!