Faking a smile when you're sad will make you feel worse. 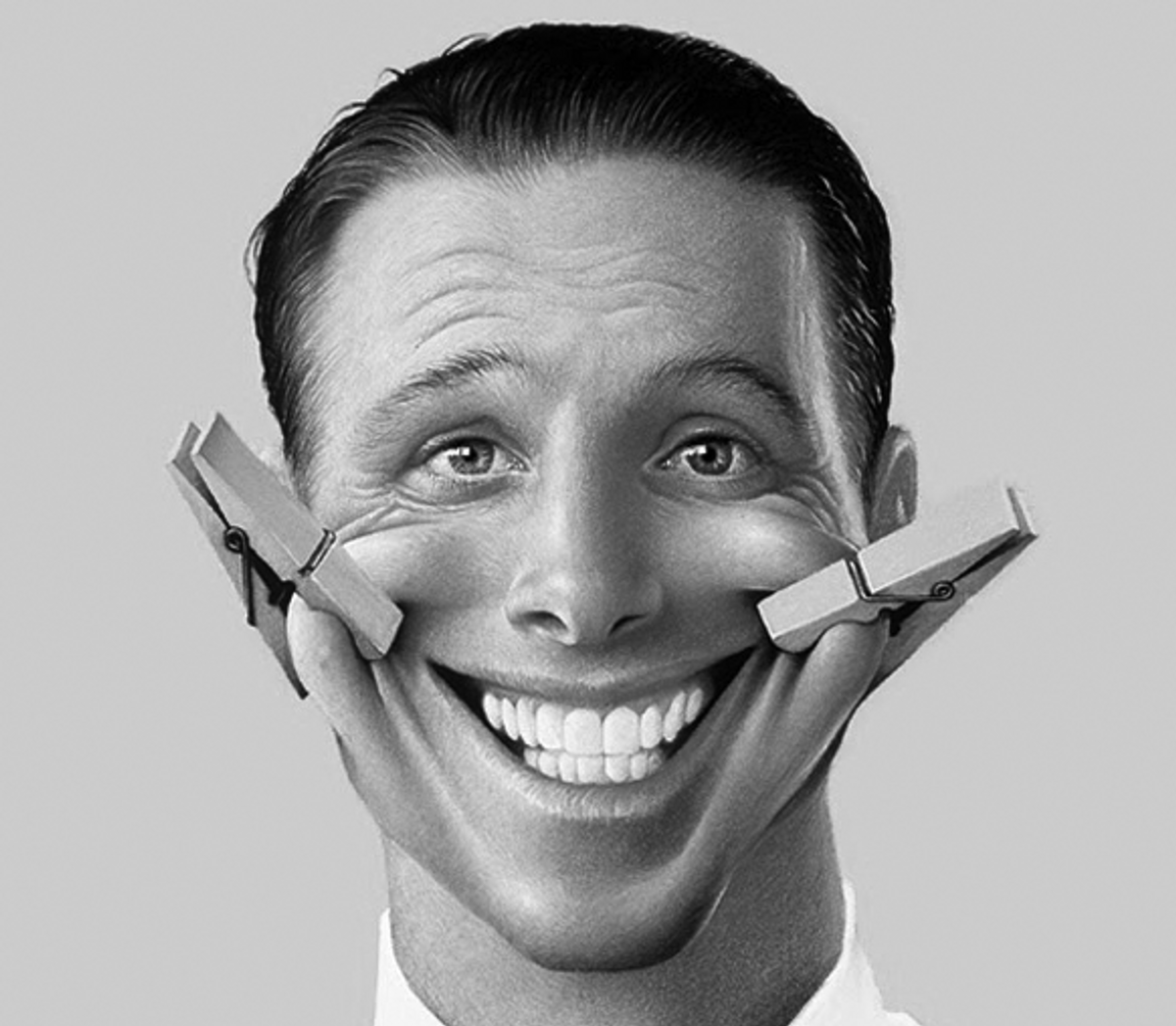 -The Joker, "The Dark Knight"

Psychological research has suggested that, while we usually expect that being happy makes us smile, smiling can make us happy too. Researchers had people maintain certain facial expressions by holding pencils in their mouths in certain ways without telling them that the experiment was about emotions. Subjects who held pencils between their teeth, which made them smile, had better moods afterwards than those who held pencils in their lips, which prevented them from smiling. In another study, subjects that were told to "raise their cheeks" (smile) felt better afterwards than those that were told to "contract their eyebrows" (frown). This effect happens because the brain notices the muscles forming a smile and thinks, "I must be happy because I am smiling."

It seems like this research would give support to the ever-popular expressions of cringe-inducing insincerity like, "Turn that frown upside down!" and "Put on a happy face!" It also seems to support the idea that, if someone wants to be happy, all he or she would have to do is try. After all, "happiness is a choice," right? Just choose to smile, and you'll be happy, right?

The idea that faking a smile makes you happy may seem suspicious based on personal experience for most people, especially since customer service workers report that keeping up a fake smile at work is exhausting. Researchers at Michigan State University found that faking smiles worsened bus drivers' moods. One Chinese company even let their employees wear masks for a day to avoid the stress of faking a smile.

So what gives? Does faking a smile make you happy or not?

More nuanced research has suggested that turning your frown upside down does not always work. Smiling can make you happier in certain situations, but in others it can make you feel worse. There are two critical distinctions between those situations: the first is whether or not you expect to feel happier after smiling, and the second is your mood before smiling.

If you expect to feel better because you smiled, you won't.

A key factor of the experiments described at the beginning of this article is that the subjects were not informed that the experiments were about emotions. When people are not trying to smile and believe that they smile as a result of being happy, smiling makes them happy. When people believe that smiling makes them happy, smiling worsens their mood. Researchers who studied this effect concluded that, for people who fake their smiles, "frequent smiling can reduce well-being" and that it is better for them to "forgo a smile until whatever negative emotion they're feeling is resolved or subsided."

If you use a smile to hide negative feelings, you will feel worse.

In one experiment, people who were shown disgusting images and prevented from frowning ended up thinking more negatively (for example, filling in "gr_ss" with "gross" rather than "grass") than those who were allowed to react as they wanted to. Hiding their negativity made their outlook more negative. As one researcher pointed out, this finding has serious implications: “People who tend to do this regularly might start to see the world in a more negative light ... When the face doesn’t aid in expressing the emotion, the emotion seeks other channels to express itself through.” In other words, smiling to hide negative emotions will backfire because the negativity will rot your outlook from the inside, even though you look happier on the outside.

Part of the reason that fake smiles don't work is that it is impossible to fake a genuine smile. There are many different types of smiles -- about 18, actually. Only one of them is genuine, though, the "Duchenne smile." The experiments from the beginning of this article forced people to make Duchenne smiles without being aware of it, but if those people were in a more realistic situation where they intentionally tried to fake a smile and expected to feel better as a result, they would have felt worse afterwards.

So it is true that smiling can make you feel better, but the fact of the matter is that you can't "fake it til you make it" when it comes to happiness. If you fake it, then you won't make it.

Mercola, "A Fake Smile Can Be Bad For Your Health"

Goodlife Zen, "Why Faking It Can be Soul-Destroying"

Madison Franz
The Narrative
1116321
Photo by Brooke Cagle on Unsplash

Madison Franz
The Narrative
653748
Photo by Manny Moreno on Unsplash