Can we truly destroy that which we have not created? 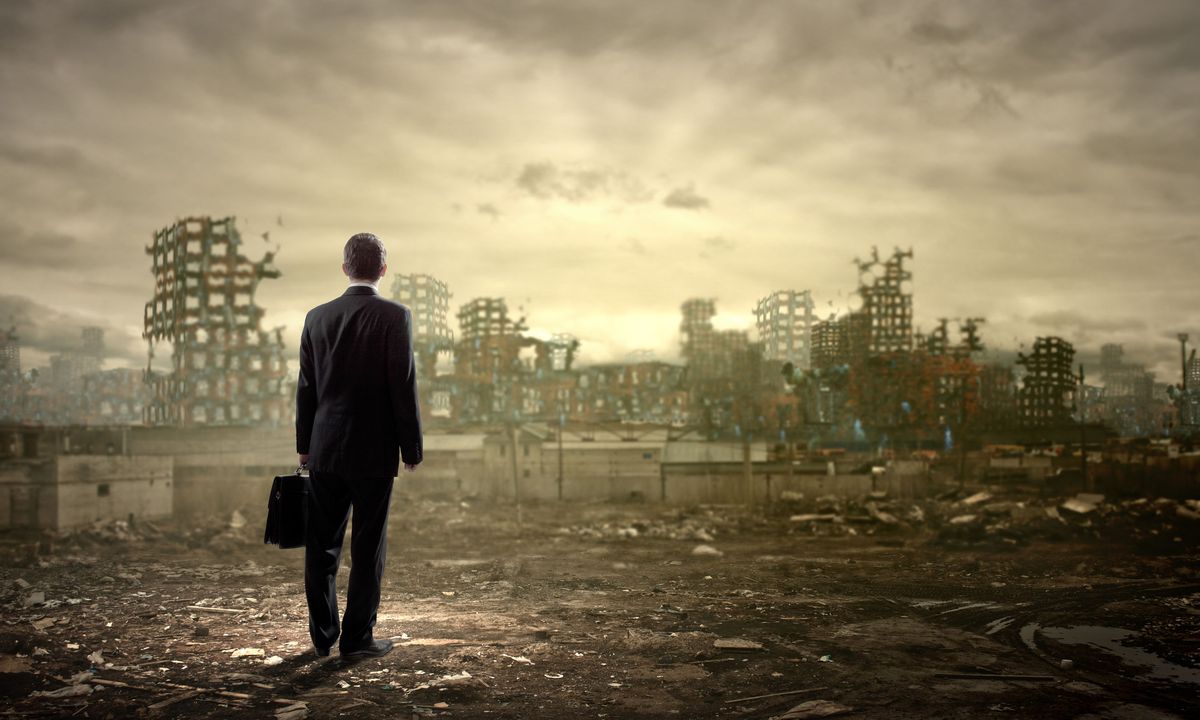 Imagine, dear reader, that a tornado has ripped through a town in the middle of Kansas, everything that was once standing remains in a wreckage of its own remains plus the remains of other structures. Everything you can see within this town is completely totaled and everything above its foundation has been destroyed or uprooted from the ground. A truly stunning and heart-wrenching sight, one would even say that it brings out the more destructive tendencies of Mother Nature. But what does it mean to be destructive? And how does it apply to nature and humanity?

The word “destruction” implies wrecking, destroying, ruining, or causing enough damage to a structure or area that it becomes impossible to restore it to its original state. In short, the word destruction implies the opposite of creation. However, when it comes to creation, it is unsure whether the world was designed by an intelligent or omnipotent being on an objective scale, but what we know insofar is that the Earth was not created under the guise of humanity. Therefore, destruction is a concept that can only apply to humans since we are able to take it upon ourselves to cause ruin to structures that we have taken the time to create and build.

Take for example, the city of Ypres, Belgium during WWI: Ypres was a fairly bustling city in Belgium by the time WWI broke out in 1914 and was most notable for its historical legacy as well as the structure known as Cloth Hall built in the Middle Ages. Prior to 1914, Ypres suffered from a lot of invasions since it was a key Flemish trading city; it was invaded by the English, the French, the Spanish, the Dutch, and the Austrians, but didn’t really suffer until the destruction wrought by WWI in the three battles that took place in Ypres.

By the time the war ended in 1918, Ypres was in ruins, as was much of Europe. Buildings were shelled, countless civilians and soldiers were dead, and it looked to be an apocalyptic wasteland. To put it in short, Ypres was destroyed; all of those man-made structures and achievements, gone, taken by man’s destructive capabilities to tear down what it is they have created.

Now, contrast this to what Ypres may have been before the Belgians, even before humanity settled down and set up their livelihood there. Ypres, like much of the world, was an untamed wilderness with creatures and animals going about their own ways with the only goal being survival. In this period, who knows what happened during this time? Fires, floods, earthquakes, and other disasters that had the potential to be appalling on its own, but nobody knows for sure. What we do know is that in this period before humanity was able to settle on this particular spot and create the Ypres we know today, it was nothing more than mere animals and untamed growth that ruled the land; humans created nothing.

But, in this context, does the word destruction still ring true? If a storm were to come along and do extensive damage to the land, would much of the trees and wildlife be considered destroyed, even if humans had nothing to do with its creation or destruction? The answer is not as clear-cut is it would seem to be. Some trees may be uprooted; some of the shelters created by the rabbits, wasps, and other wildlife may perish, but other than that, it should serve as no more than a mere changing of the landscape. Albeit in a violent manner, the Earth has sustained much of these changes since its creation and is doomed to suffer thousands, if not, millions of more changes as long as it is in the equation given the unpredictable and spontaneous nature of the universe. Henceforth, it is not destruction if nothing is destroyed that was not created or put in place with a specific intention of doing so, as humans are known to do.

But now, the shoe is on the other foot when humans are added to the equation. Given the conscious and organized nature of humans, when we create something, we do it with an end in mind, a goal, a purpose, an intention, etc. Even something as simple as a hammer or a brush was created with the intention of nailing or brushing something off; even a naturally sharpened rock which can be used as a knife or a spear can hold a purpose, even if humans had nothing to do with its creation. When we take the time and effort out of our beings to direct it into a project such as, say, erecting a building or building a sewer, we are engaging in these projects as a result in order to get something out of it. When it is destroyed, we recognize that it is no longer of any use, or as much use as it was when it was created; it may be rebuilt or fixed, but so long as it remains in that state of destruction, it can provide few to little benefits whatsoever and is negated of its purpose; which is the ultimate priority of destruction.

To destroy is to rid something of its usefulness or its purpose. This is why in the purposes of modern warfare, centers of high-functioning industrial or manufacturing activities (such as Ypres) are targeted because those areas contain the means with which to produce the most benefits to that particular side. Whether it is to produce food, arms, technological advances, or any other necessity that side may have, when it is destroyed, it can no longer produce those amenities in the fashion that it once did, and in turn, robbing that particular side of whatever it was that the industrial hub produced required to engage in battle.

But, what if something manmade was robbed of its purposes by conditions outside of man’s control? Take for example, the Fukishima Nuclear meltdown in 2011 that occurred after an earthquake and a tsunami. Nuclear plants on their own are unstable and given to accidents from time to time (such as Chernobyl and Three-Mile-Island) but in the case of Fukishima, it was under purely natural circumstances that the destruction was brought about, so what then?

Even though man himself did not cause the destruction of the power plant, it can still be considered destroyed since it was something that was created and stripped of its benefits. Although man may not have destroyed it, it was still negated of its purpose, whether or not it was intentional. For even though nature may have taken its toll as it has thousands of times before, it came into interference with man’s creation and happened to wreak havoc upon a subjective purpose bestowed upon it by man. Man gave that particular structure a purpose and did so to carry out some purpose, and when its purpose stops short of its natural time for doing so, then it is simply destroyed, regardless of whether it was man or nature that was the perpetrator.

The long and short of destruction is that it is an action undertaken in order to negate something of its purpose, no matter who engages in it. Destruction itself is a force which can only weaken or stop anything or anyone from carrying out a specific set of benefits. But since nature itself is an unpredictable and unstoppable force which destruction knows no bounds, it would be pointless to try and stop it. However, nature and/or natural objects cannot be destroyed so long as it lacks in a subjective or objective purpose, it is entirely unsure what good a patch of field can be until we designate a specific purpose to it before it is ruined in a storm. The field cannot be destroyed so long as it lacks a purpose; instead, it is merely just a change in the landscape, along with the cataclysmic events that have come to define Earth in the millennia before humanity.

So dear reader, can we truly destroy the planet if we have not designated much of it to any specific purpose? Or is man yet another force of nature, which can change the world in ways unseen before without us even knowing it?