Elle Woods wouldn't have joined an organization she couldn't be proud of. 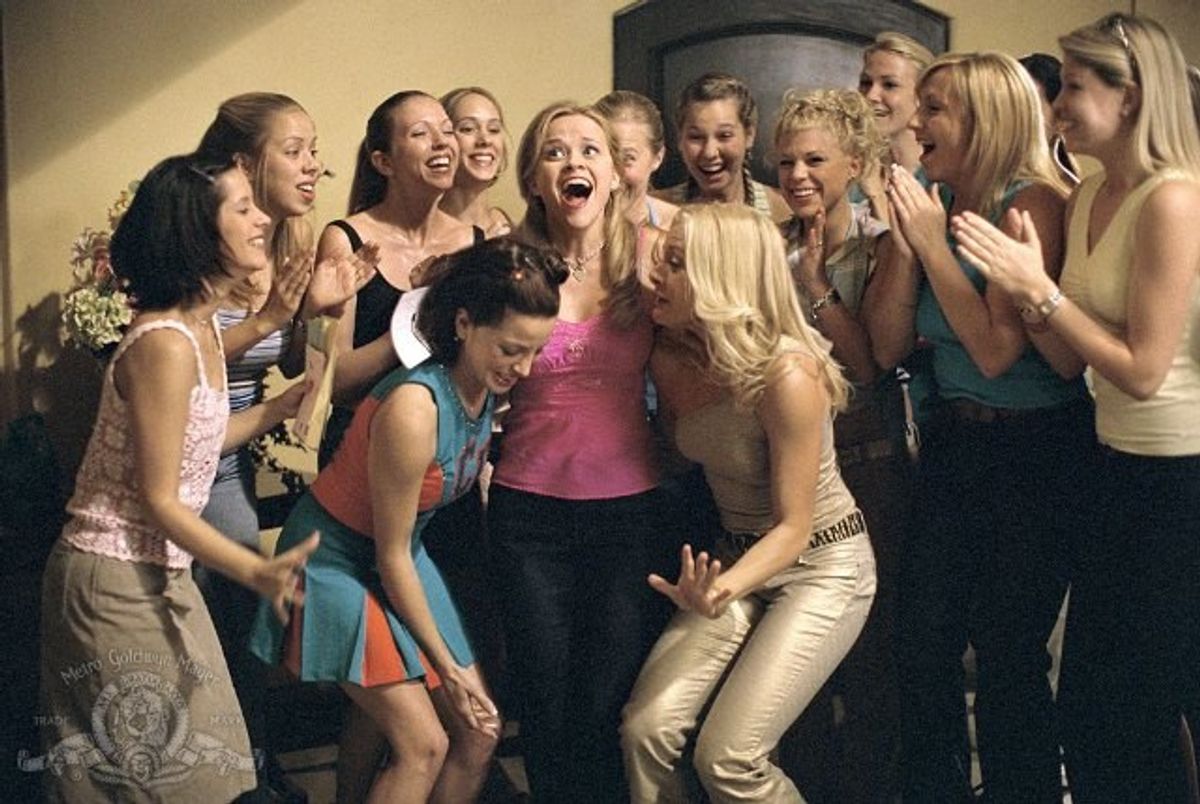 It is very common in today’s media for Greek organizations to be portrayed as raging partiers who can’t be bothered with realistic responsibilities. The fraternity boys are recovering high school jocks interested solely in drowning themselves in alcohol and the sorority girls are blonde bimbos who only seek the attention of those moronic frat guys.

While often cited as an example of these extreme stereotypes, Legally Blonde’s fictional sorority, Delta Nu, is the perfect example of what a sisterhood should be.

In the opening scene of the movie, the camera follows a handmade card with “Elle” written in pink glittery letters through the sorority house. While the purpose of the montage is to show how classically blonde and superficial Delta Nu is, I can’t tell you how many times the same thing has been done in my sorority. We have each had cards, posters, canvases, or random candy bars given to us by sisters in hopes of encouraging us in our next endeavor. Elle’s sisters were excited for her for her date with Warner, just as my sisters have been excited for each other as new relationships form, job opportunities arise, or personal family upsets are resolved. We show each other support, no matter what.

Every single person questioned Elle’s desires to get into Harvard Law School; that is, every person except her sorority sisters. Instead of putting her down by telling her she was too stupid or wasn’t qualified, they stood by her and fought with her, even if they didn’t really understand. Girls took turns helping her study, quizzing her, and making sure she stayed focused and determined as she missed out on her last semester of college. Sisters encourage each other to follow their dreams and strive to be the best they can be, even if they odds aren’t in her favor.

Sisters hang out with sisters.

In the opening scenes of the movie, in what could be the perfect recruitment video, there were groups of sisters in the house partaking in various activities. From cheering to grooming to exercising, sisters were hanging out with sisters. Although the scenes were intended to poke fun at the superficial of sorority interests, no sister was by herself. In every sorority, you meet girls who have the same interests as you. In any size house, there will be girls you don’t get along with or have nothing in common with, but there will be the girls you do. You’ll go bowling together, or hit the gym after class. You’ll spend nights in the library studying until you can’t keep your eyes open. There will always be a sister to find and hang out with, and you will never be alone.

As Elle went through a low point in her life after Warner broke up with her, her sisters did what they knew would comfort her; they took her to get her nails done. Although this may not comfort all girls, Elle’s sisters knew it would comfort her. They put aside their own issues and they focused on taking care of Elle. They made sure that she was alright. When sisters face let-downs in their lives, their sorority comes to their rescue. Girls will put aside what they want to comfort their sisters, because that’s what sisterhood means.

Towards the climax of the movie, Brooke fired her lawyer and hired Elle in his place. Even though Elle was still working her way through law school and wasn’t completely competent to fight in a case, Brooke believed in her because she knew that Elle possessed the qualities of a Delta Nu, and that was something she could believe in. Girls are drawn to their sorority based on their values and what is truly in their hearts. When you meet a sister, whether it’s an alumna or a sister from a different chapter, you know she possesses characteristics you can be sure of. You believe in her, just as you know she would believe in you.

Throughout the movie, there were so many instances that truly reflect what being a part of a sisterhood means. From Elle’s sisters coming to support her during trial to her sisters grieving by her side through her downs and celebrating during her ups. Even though the movie makers intended to depict a superficial sorority, they helped represent what sisterhood is truly about.

Caitlin Marie Grimes
University of South Florida
9459
Beyond The States