"Why I do trifle thus with his despair is done to cure it" - The History of King Lear, Act IV.5 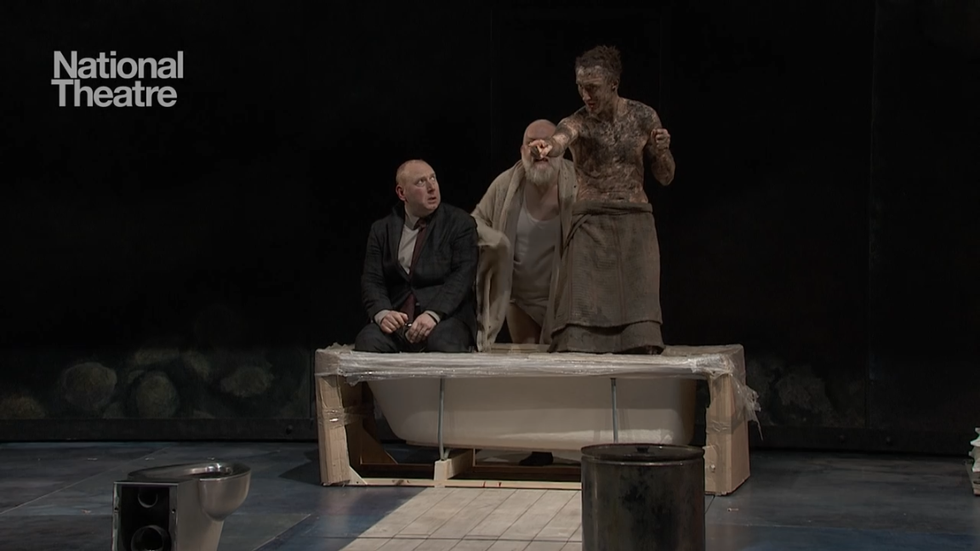 There has been controversy among scholars of whether the mock trial scene in "The History of King Lear" (1608) should have been kept or taken out in William Shakespeare's later edition of the play titled "The Tragedy of King Lear" (1623).

Upon arguing that the mock trial from the Quarto version of "King Lear" should be included, detailing the characters' involvement in this minor scene is important. While it may have appeared trivial to the audience members in 1608, this scene provides an ominous point when the play changes dramatically. While other characters do serve their own roles in the mock trial, the most important character would have to be Edgar.

He seemed to be the only person in control of himself while the Fool is abetting his "nuncle's" madness and Kent is clearly uncomfortable with the whole ordeal. What is interesting is that Edgar is not that different from Kent and the Fool, since he is playing a character, just as Kent is disguised as a servant named Caius and the Fool's place in Lear's court is to be his entertainment while also subtly forewarning him of any possible misjudgments. What makes Edgar important from the others, however, is not what he does in the moment but afterwards in the play. Later in the play, when Edmund is assembling his army, Edgar emerges from his disguise as a messenger and duels his half-brother. So Edgar's penchant for disguises enable him to change the plot of the play.

The importance that Edgar has, alongside the Fool, is being made a judge for Lear's "court," even though he is supposed to be just as mad as Lear. The choices of judges for this "trial" are meant to represent the injustice of society as Lear saw it. The inclusion of the mock trial should show how much Edgar, as Tom o' Bedlam, manages to witness the descending madness of King Lear, willing to put his own daughters on trial for the simple act of refusing his attention, specifically Goneril for "kicking" her father, as he saw it.

Being a witness to Lear's "trial," Edgar would comprehend how a human being would not be in a stable state of mind and would eventually understand how to handle his father when becomes blinded and suicidal. That is why he decides to "trifle thus with his despair is done to cure it." Edgar, continuing to be in disguise, would know to play with delusions if it meant placating these two men.

When Lear calls his daughters (without subtlety) dogs that bark at him, Edgar panders to Lear's madness by telling them to "avaunt." When a cat and a stool were made as "Goneril" and "Regan," they are put on trial, but when the cat runs off, Edgar is forced to act as Lear accuses him of aiding her escape. Another moment happens when he finds Lear wearing a crown of weeds and he supposedly gives him payment for his services and mentions bird before prompting Edgar to say a password.

When the mock trial strays from importance is when Bessy the Boat is mentioned. Clearly, this was the part that was reserved to 1608 since it came from a popular ballad at the time. Other than to make some misogynistic jokes, this may have been referenced by Tom and the Fool in order to improvise and maintain Lear's delusions.

The hatred Lear spewed was not simply the aftermath of interfamilial drama, but a problem that could divide the kingdom in more ways than he intended. Edgar would know the rivalry between Lear and his daughters would eventually culminate into the civil war that happened later in the play. When a gentleman approaches Lear and Gloucester, Edgar immediately asks if a battle was happening. Edgar would not have gained this resourcefulness, as well as not escaped the house when Gloucester announced Goneril and Regan's arrival, if he was not perceptive enough to see it coming.

Edgar would also gain insight as to how much Lear distrusts his own daughters. This would be important information to Edgar since his illegitimate brother forged a letter threatening to kill Gloucester in order to take his place as heir. In his soliloquy after the Mock Trial, Edgar shows sympathy for Lear, since his own family is in disarray.

In one of Tom's delusional episodes, he tells a demon taking the shape of a nightingale that he will not feed it. Although this rambling serves the purpose of Edgar trying to make Tom o' Bedlam into a convincingly mad man, it may also be ominous, when it referred to Edgar not "feeding demons." It may have to do with what he said earlier about looking "…where he stands and glares." He could be referring to the demons that haunt him, King Lear, or both. Perhaps Edgar is talking about the dangers of playing into Lear's delusions within the guise of insanity, even though he had no choice but to play along.

Unlike King Lear, when Edgar leads Gloucester the supposed cliffs of Dover, he does so with the knowledge of how to deal with someone who is not in his right state of mind. In Gloucester's case, he has become blinded by the two sisters and their husbands and as a result he has become suicidal. Telling the audience that he must pander to delusional men in order to guide them to sanity, Edgar does not immediately tell him that he is his son, since his father would not know how to act being reunited with a son who he believed wanted him dead.

The mock trial scene in the Quarto version of "The History of King Lear" is a part that can be underestimated, as it helped one of the major characters, Edgar, develop a larger role later in the play. Removing the mock trial in the Folio meant removing the development of Edgar as a character who is able to use his wits to placate a mad king.