A Day In The Life Of A Horse
Odyssey

A Day In The Life Of A Horse

Thoughts from a horse's perspective. 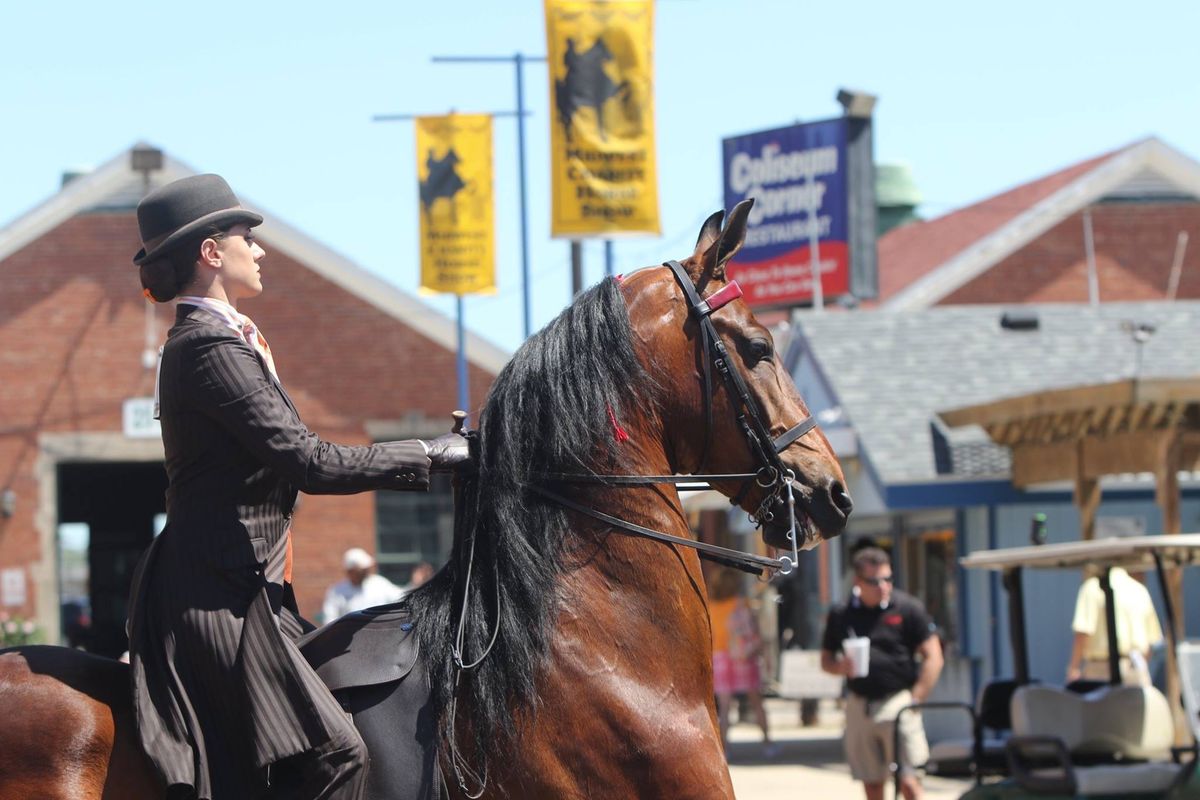 Today, Fauzi wakes up in a new place. While the two horses that stand next to him are from home, everyone else surrounding him is new. In this new place, there are so many new things around him -- new neighbors, those who look similar to him and others who look completely different. There are new smells, like the freshly laid sawdust in his stall and the smell of the alfalfa a couple doors down. New sounds, like the constant buzzing of the fluorescent lights that hung high above his head. This is no average day for Fauzi, but rather, today is Fauzi’s big day.

Fauzi is awakened from his slumber particularly early one morning by the voice of his owner, Renae. While Renae isn’t very big in comparison to Fauzi, she is as powerful as a giant in Fauzi’s eyes. As Renae opens his stall door, he greets her with a warm nudge as if we were saying, "hello." She slips his brown leather halter on that has a gold plate on the side of it that reads Fauzi’s full name, "Absolutely Got It."

Renae leads Fauzi out of his stall and off to a new location. With his big hoofs, you could hear Fauzi coming from a mile away as his shoes click, clack, and clap on the pavement. As Renae pulls Fauzi into a wash rack, he begins to fidget around. He hates getting hosed down, just like any little kid hates taking a bath. As Renae washes his tail his feet creep closer and closer together until he looks like a circus elephant on a pedestal. Once Renae is done with his tail, he relaxes and stands square on all four feet again because he knows his favorite part is coming up. Renae now works on Fauzi’s feet to shine them up and also scrubs one of his yellow tinted socks until it is as white as freshly fallen snow. From the wash rack, Renae leads Fauzi back to his stall but before going back into the stall he gets to stand in the aisle and air dry.

Fauzi loves to stand in the aisle as the wind shoots through like a wind tunnel. He gets his tail brushed out once again and his hoofs this time are coated with a black tint that adds just a little extra shine. As he stands in the aisle, he lets the wind take his mane and blow it into all different designs.

Once his feet and tail are dry, Fauzi gets some downtime in his stall. This downtime usually consists of sleeping, eating and the occasional nickering with those around him. As an hour or so passes, Renae is back with his leather halter. This time, she ties him up in his stall and begins the show-preparation process.

Fauzi gets one last full body brushing and then is sprayed with some sort of airol spray that smells similar to cotton candy and makes his coat shine a little brighter. After his body is sprayed his mane and tail are coated a little extra, then Renae returns with a baby wipe to get all the specks of dust off of Fauzi’s face. This time, Renae comes in with Vaseline to really shine up Fauzi’s face and to accentuate all of his beautiful qualities and she leaves again. This time she comes back with a saddle pad, that is dampened with warm water to prevent it from moving, a saddle and a girth. She places the pad on his back and then the saddle. She swings the girth underneath his barrel and snugs it up so there is no movement.

Once he is prepped, Renae pulls Fauzi out of his stall. This is when he finally sees his mount. She is dressed in a brown day suit. With a white and orange striped shirt, orange vest and a pretty paisley tie. She walks over to him and gives him a kiss and gives him a brief pep-talk. Then in the blink of an eye, it’s time to go up to the makeup-ring. Fauzi’s rider is thrown onto his back. While people make sure his rider is situated, they make sure Fauzi looks the best he has ever looked, and off they go.

Once the rider feels comfortable and Fauzi feels good, they wait. While waiting, someone will go through Fauzi’s tail one last time and then the gate opens. Fauzi’s rider points him at the gate, and he knows what to do. Fauzi perks up, blows out a mighty snort and trots into the arena. While their time in the arena is short, it was thrilling. Fauzi lives for the moment where he is the star and that is exactly what he was on his big day. He was a national champion, a star.