The Day My Brother With Down Syndrome Became A Viral Meme

How one picture can hurt a community, family, and a sister. 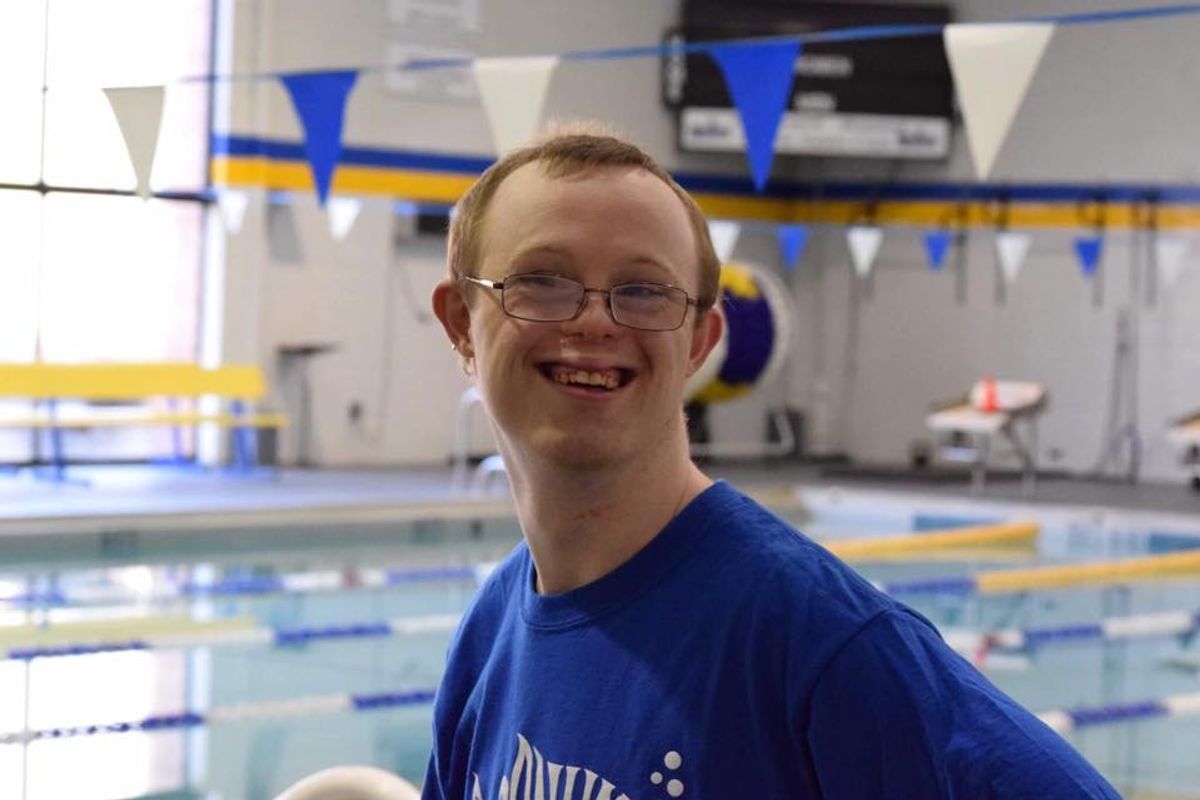 My brother is one of the greatest people you'll ever meet. He's 23 years old, charismatic, always optimistic, and hard-working. He's the guy that everyone in my hometown knows and loves regardless of who they are. Another thing you should know about my big brother is that he has Down Syndrome.

See also: Here's What You're Actually Doing When You Use The 'R-Word'

Rion has pretty much always been accepted with his disability and never really had a problem with bullies. Everyone was his friend and he has always loved everyone regardless of their race, religion, and economic stature. Even strangers who would recognize him would be treated like a lifelong friend. In seeing how others have adored Rion growing up, it never really struck me that someone else would ever wish to cause him harm. That is, until the day that he became a viral meme.

The meme isn't worth posting in this article because it is demeaning beyond all measure. It makes fun of his disability with a photo of him in one of the most joyful moments of his life. The moment I'm referring to is the day he opened his acceptance letter into the Clemson LIFE program for special needs adults at Clemson University.

In the photo, his face was a total expression of joy and someone decided to take that and use it to mock him (see the photo below). I didn't know about the meme until I was contacted by two past classmates of mine from middle and high school. Both of them were absolutely appalled by the meme and had reported it. I was in shock initially, but then I became upset and angry. I didn't know who on this entire planet would ever wish to hurt my brother and it killed me that I was unable to detect who the meme creator was.

I wanted the creator of the meme to feel the weight of what he had done. I wanted him to come out from behind the security of his computer screen to face me in the real world because only then could he see the negative impact his cruel joke had upon so many people.

See also: My Brother Has Down Syndrome

Besides the unknown subject who created the meme, I was angry at the meme page and moreover angry with what I was seeing in the comments. People were tagging their friends and laughing at Rion. Over 3,000 people were ridiculing him.

Being the protective sister that I am, I commented on the picture and told them exactly what kind of guy they were making fun of. I told them of his zest for life and of his kind heart, of his desire to work two jobs even though it isn't necessary. I told them what they needed to know before making my brother into a public laughing stock. I'm not sure what happened after that because I proceeded to report and block the page.

Before I blocked it, I desperately searched for someone to stand up for him. In hundreds of comments mocking him (and I didn't scroll all the way), I found two people who had stood up for him. It pains me to know that we live in a society where those who are different are subjected to horrible treatment and malicious intents.

Though many of us tried to report the meme, Facebook wouldn't do a thing. If you're being cyberbullied, know that Facebook will not remove the post. It's really heartbreaking. However, I did learn something from this horrible experience. I learned that our hometown has a strong community who won't stand for my brother being messed with. So many people banded together and messaged the page itself expressing their anger towards them for what they had done.

Tongue Punching Memes for Festy Teens (as the page is named) wound up apologizing to my mom for any hurt they may have caused, though they still didn't see what was wrong with their actions. I'm grateful for a community of people who stand up for those with special needs. My brother doesn't know about the picture and our peers were very protective of him and refused to share it. No one wanted him to see it. But even if he doesn't know what everyone did out of loyalty to him, I know he's thankful for everyone unconditionally.

There is nothing shameful about Down Syndrome, nor autism, nor any disability. If anything, those who have disabilities are more evolved than us when it comes to feeling compassion, joy, love, and so many other beautiful characteristics. They will always be loved in my eyes, and hopefully in yours too.

siblings
Report this Content
This article has not been reviewed by Odyssey HQ and solely reflects the ideas and opinions of the creator.