Damn Daniel Or Damn, How Did That Go Viral?

Damn Daniel Or Damn, How Did That Go Viral?

"Back at it again" with the latest Internet craze. 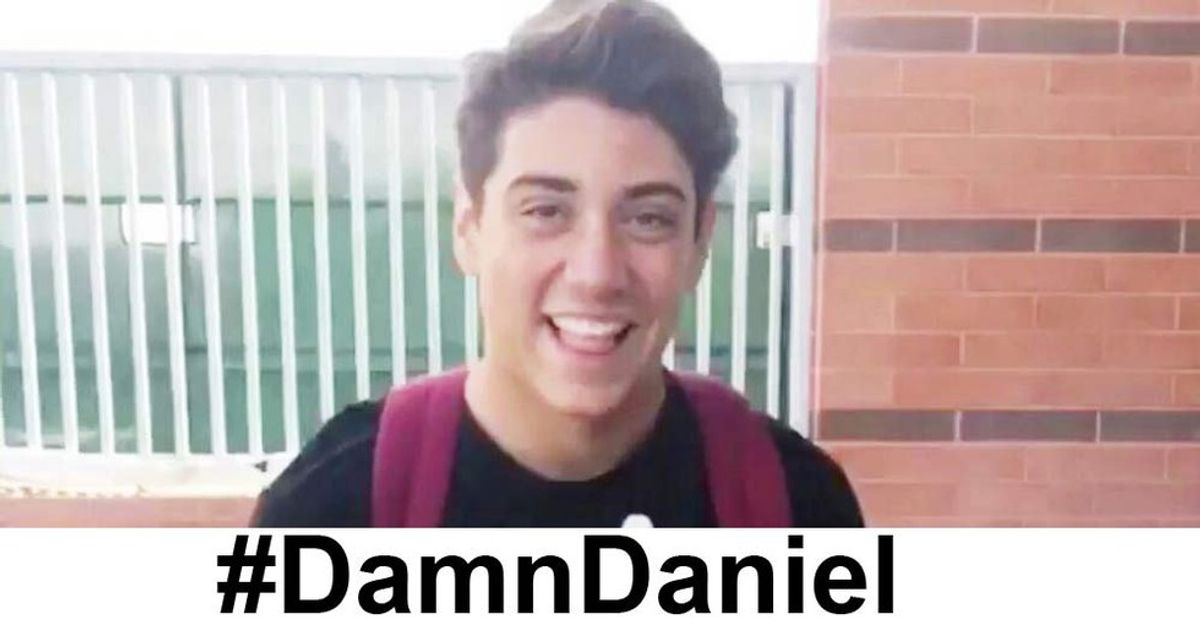 Damn, Daniel. Daaaaamn Daniel. Back at it again with the white Vans.

Chances are, you've already hear these famous lines by now, and if you haven't and are utterly confused at what that is, you're about to get the inside scoop on the newest and silliest obsession plaguing all social media.

Take a jog down memory lane with the blue and black vs. white and gold dress debate that hit the internet by storm... well, we have a new subject this year and his name is Daniel Lara. The Internet star is featured in a series of Snapchat videos posted by a kid named Josh, who yells "Damn, Daniel" in a funny voice as Daniel goes about his life as a high school freshman. And if you thought there was more to this, then you are sadly mistaken. These two words were all it took for these two boys to slowly grab the world's attention. Welcome to the 21st century, people.

The video has over 45 million views in just nine days, with over 260,000 retweets and 330,000 likes. Damn, Daniel; you're popular. This kid is already more famous than I will ever be and all he did was merely show up to school in a fashionable outfit and a pair of white Vans. Yet somehow he is all everyone is talking about.

Sooo, wondering how this even came about? How on earth did this go viral? Well, it turns out that Josh, the mastermind behind it all, said that he did it on Snapchat one day for fun and then his classmates really enjoyed it, and urged him to "keep it going." Daniel, obviously enjoying the attention, went along with it. As they say, started from the bottom and now...a damn Internet sensation.

This video has even inspired remixes and songs, for reasons I can't understand myself. Some big "Damn Daniel" fans put these together and the scary part is: they're actually really catchy. The perfect song to jam out to when you feel like hitting the club in your white vans. See for yourself.

As if their Snapchat fame wasn't enough, they were even featured on Ellen last week. And we all know that's when you know you've made it. Just two high school boys having some fun on Snapchat and casually making their way onto national television. You know, the usual! Ellen rewards them for their admirable Snapchat efforts by giving Josh a customized "Damn, Daniel" surfboard and giving Daniel a lifetime supply of Vans. These kids are living the dream right here.

I haven't even told you the best part: Daniel has received many marriage proposals over this. Let me remind you that this kid is a freshman in high school, only 14 years old. He has not even attended prom yet, much less looking to tie the knot. Now I'll admit this kid is very good looking, but let's be real; what would possess you to openly confess your desire to marry a boy who the only thing you know about is that he wears white Vans?

Oh, and did I mention that a pair of "Damn Daniel" white Vans are being sold on eBay for thousands of dollars? Yup, the world has officially gone clinically insane. People are literally willing to pay absurd amounts of money in order to wear the famous "Damn, Daniel" sneakers. Like damn, that is probably the dumbest thing I have ever heard.

So I hope these youngsters enjoy their 15 minutes of fame because we can only watch it so many times before questioning why this is even worth our time. But for now: watch the video, have a few chuckles, and then mentally prepare yourself for the next ridiculous, nonsensical internet craze that we just can't tear our eyes away from.