My Fussy Cockatiel Showed Me That If You Really Love Someone, Love Them How They Want You To

It took more than one bite on the nose to accept that he wasn't big on cuddles. 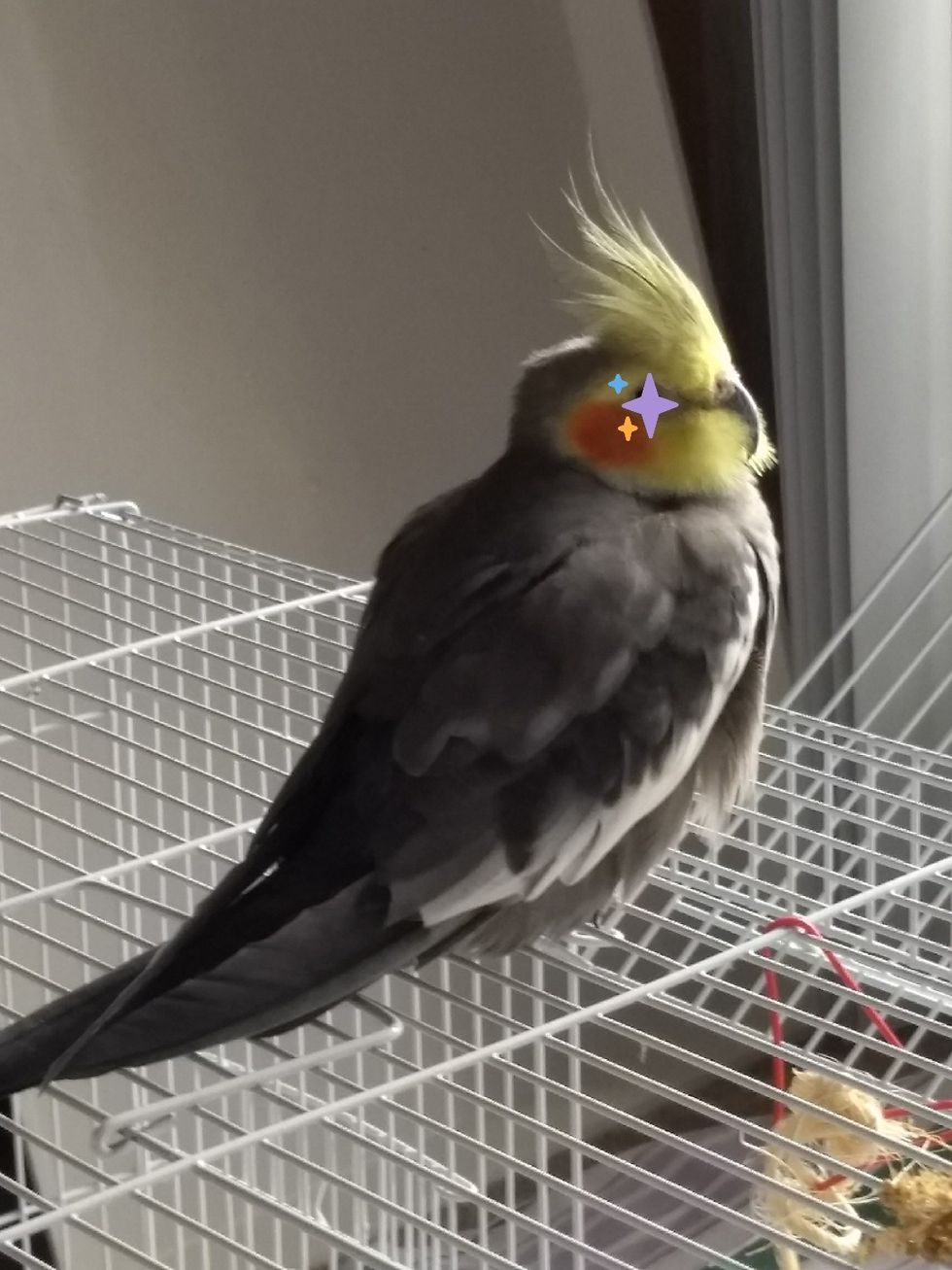 Six months ago, I became the owner of a gray-feathered, yellow-headed cockatiel named Rumi who has become the shy son of our household.

The first few months, Rumi used to rarely chirp more than once a week. I didn't know why exactly, but I knew I was partly responsible for some of his quiet days. Before Rumi, we had clingy goats, snuggly rabbits and loud parakeets (at one point, all at once), so I was used to being physical and cuddly with all our pets, and it never took longer than a week or two to win them over. But with Rumi, it's been entirely different.

I express my love for animals through touch and gifts. So two days after Rumi settled in, I bought him six different toys and put them all in his cage to see which he liked best. A week after just getting him used to my presence, I tried to teach him how to step-up and let me stroke his feathers. But Rumi was not having it. The toys overwhelmed him, and he only found security in two. He was also very scared of me, despite all my attempts to appear as friendly as possible. He would not chirp and didn't let out a single tweet until over a month later.

Needless to say, I felt like a horrible owner and couldn't understand what I was doing wrong. I was giving him so much care and affection; why didn't he love me already?

Then I realized, I couldn't actually tell what Rumi liked. Our previous pets had all been fairly assertive about what they did and did not like, so it wasn't hard to figure out how to befriend them, and it also worked out that a lot of our interests aligned — I like cuddles, and so did they. To add to the confusion, all the cockatiels on YouTube seemed to verbally express their love with loud confirmation.

SEE ALSO: 27 Things You Know To Be True When You're A Certified Snugglebun

But I learned over time that Rumi, on the other hand, shows his love in the little ways.

Rumi does not like to be touched yet, but he still chirps in response to all my air kisses. He enjoys perching near the window for hours on end but will hop onto my hand almost every time I offer. He hates cuddles but begrudgingly accepts scritches on his mohawk. He doesn't even like to eat fruit (which all the YouTube cockatiels seem to love), but he gives everything a try to humor me.

As I've been trying to understand Rumi's personality and change my behavior accordingly, he's been doing his best to meet me halfway.

All that time I was trying to win him over, I didn't bother to pay special attention to his likes and dislikes.

Why was it hard for me to accept his opinion for what it was? If I truly loved him, wouldn't I have paid more attention to what he wanted and what expression of love he responded to best, rather than doing things I like and assumed he would as well?

I know it may sound silly to say I've developed a whole new take on how to express love just because of my pet bird, but that's exactly what I'm saying. Rumi makes me think, and he's been incredibly patient with me despite how annoying I've been, wondering why he doesn't love me when I've never picked up on the signs or selflessly reciprocated love the way he wanted to receive it.

We've all done this with the people and animals in our lives. We express love in ways that are convenient for us, rather than give love to the person in the way they want to receive it.

You may buy gifts for your parents and call it an act of love, when in actuality, maybe your parents just want you to spend time with them.

You may give a friend multiple hugs and go out a lot, when maybe what your friend actually needs is a quiet night in.

When you package your love in all the ways that suits your wants and needs, you fail to put yourself in the shoes of the other person. And that is why your love may go unrecognized and unappreciated. Your love wasn't really for them. It was for you, because that's how you wanted to love.

Love travels on highway intersections. Sometimes we're so focused on reaching the end of that drive that we forget about the genuine growth we should be experiencing while out on the road. Rumi, in all his fussy, nonchalant glory, helped me understand that love is a work in progress to not only growing a relationship but to also make you a better person.

how to love
Report this Content
This article has not been reviewed by Odyssey HQ and solely reflects the ideas and opinions of the creator.