The story of how a promising company quickly learned to be itself. 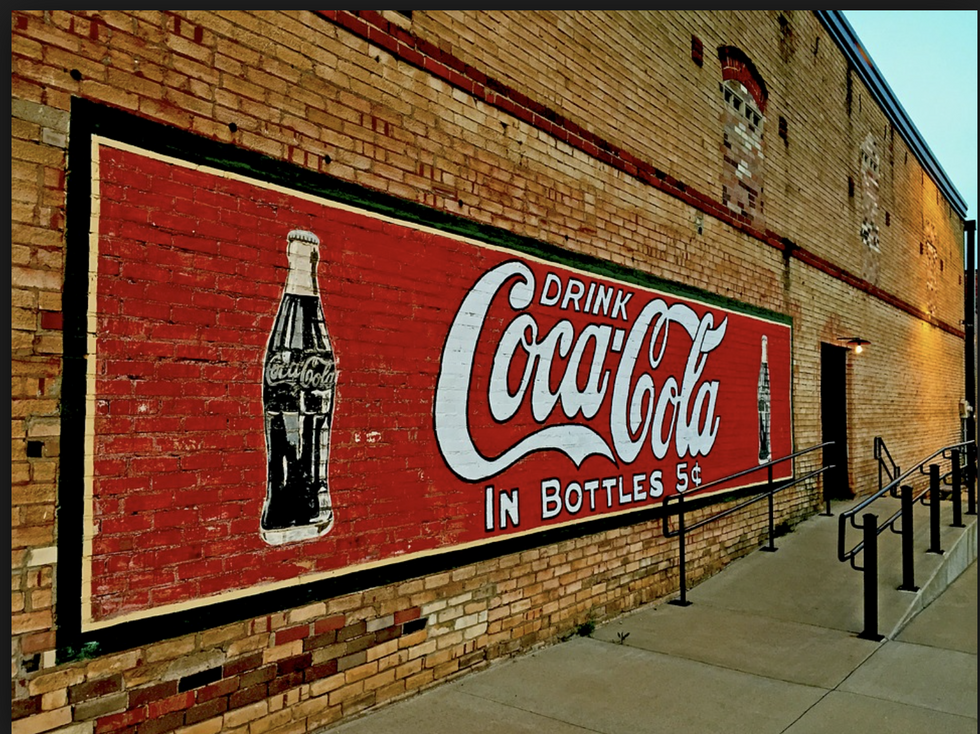 After the civil war John Pemberton, other wise known as “doc", was trying to find something that would bring him success. . So after a refreshing move to Atlanta, Pemberton thought he would try his hand at the beverage market. At this time, soda fountains were rising in popularity due to the Temperance Movement. This was the birth of Coca-Cola.

Unfortunately, Doc Pemberton had no idea had to advertise and sell his product. In order to differentiate itself from its competitors, Coke decided to put itself into bottles. You see, at this time there were no refrigerators, soft drinks were stored in coolers of ice. And since consumers couldn't see what they were grabbing in the ice, Coke decided to make a unique bottle. Workers from a glass plant in Indiana came up with a winning design and they thought that Cocoa was an ingredient in Coca-Cola, so they made the bottle look like a cocoa seed. Their design was slimmed down and the unique qualities of the bottle still remain on the plastic bottles of today. In late 1969, Coke came up with the slogan “The Real Thing".

Okay, stay with me here folks. This story is going somewhere, trust me.

I bet on July 10, 1985, the executives of Coca-Cola would like to have been able to write a letter and send it back in time to themselves. You see, on April 23rd of that year, was when the new formulation of Coke was released. The problem with new Coke was the change of the taste was like changing people's lives. And on July 10th it was announced that Coca-Cola classic would be returning to store shelves. The Coca-Cola executives couldn't go back in time and neither can I, but if I could go back in time and give my younger self advice this is what I would say and I would like to share it with those who can relate and use it at this point in time.

Do your thing. Do it unapologetically. Don't be discouraged by criticism. Pay no mind to the fear of failure. It's far more valuable than success. Take ownership, take chances, and have fun. And no matter what, don't ever stop doing your thing.

You don't need anyone's affection or approval in order to be good enough. When someone rejects or abandons you. It's about them and their own insecurities, limitations, and needs and you don't have to internalize that. Your worth isn't contingent upon other people's acceptance of you- its something inherent. You exist, and therefore, you matter. You're allowed to voice your thoughts and feelings. You're allowed to assert your needs and take up space. You're allowed to hold onto the truth that who you are is exactly enough. And you're allowed to remove anyone from your life who makes you feel otherwise.

One day it just clicks… You realize what's important and what isn't. You learn to care less about what other people think of you and more about what you think of yourself. You realize how far you've come and you remember when you thought things were such a mess that they'd never recover. And then you smile. You smile because you are truly proud of yourself and the person you've fought to become. I believe everyone deserves that smile. All you have to do to receive that smile is be yourself.

Remember to never waste your time trying to explain who you are to people who are committed to misunderstanding you. Do you know what happens when you decide to stop worrying about what other people might think of you? You get to dance. You get to sing. You get to laugh loudly, paint, write, and create. You get to be yourself. And you know what? Some people won't like you out of pure jealousy. Some will laugh or mock or point out your flaws… but it just won't bother you all that much.

My personal experiences of finding my true identity have produced so many positive outcomes. This positive outcome of not abandoning my thoughts, my ideas, and my feelings and not sacrificing myself just for an ego or reputation changed my life and how I perceived myself. I figured that at first they will ask you why you are doing it, and later they will ask you how you did it. Being yourself, and being humble and kind is contagious. People will forget what you said, people will forget what you did, but people will never forget how you made them feel.

So, you, take my advice. Read or remember this letter every time you have second thoughts or your convictions are being tested. Do you boo. And be yourself; because an original is worth more than a copy.

As of now, Coca-Cola is doing as well as it ever had been. Look at a bottle of diet Coke today, you will notice that the “d" in diet is lowercase. This is done with a purpose. It is to show that its origins are still Coca-Cola.

Just like people have tried to change Coke, there have been times that I felt pressured to change my beliefs and ideals. And like they learned at Coke, I learned that it's that sometimes the darkest times can bring us to the brightest places. I've learned that the most toxic people can teach us the most important lessons; that our most painful struggles can grant us the most necessary growth; and that the most heartbreaking losses of friendship and love can make room for the most wonderful people.

I've learned that what seems like a curse in the moment can actually be a blessing, and that what seems like the end of the road is actually just a discovery that we are meant to travel down a different path. I've learned that no matter how difficult things seem, there is always hope. And I've learned that no matter how powerless we feel or how horrible things seem, we can't give up. We have to keep going. Even when it's scary, even when all of our strength seems gone, we have to keep picking ourselves back up and moving forward, because whatever we are battling in the moment, it will pass, and we will make it through.

We've made it this far. We can make it through whatever comes next.

Just like Coca-Cola, our individualism will shine through in every obstacle we face. Just like any other successful well-being, there are your haters and there are the people that have been in your corner from day one.

So, learn from Coca-Cola and be yourself. They, and many others, have found out the hard way that not staying yourself, never ends well. Don't change, stay classic. Own who you are.