Hear now the words of the witches The secrets we hid in the night. The oldest of gods are invoked here The great work of magic is sought. ... In this night and in this hour I call upon the ancient power. Bring your powers to we sisters three! We want the power. Give us the power. -Phoebe Halliwell (Season 1, episode 1 of Charmed). 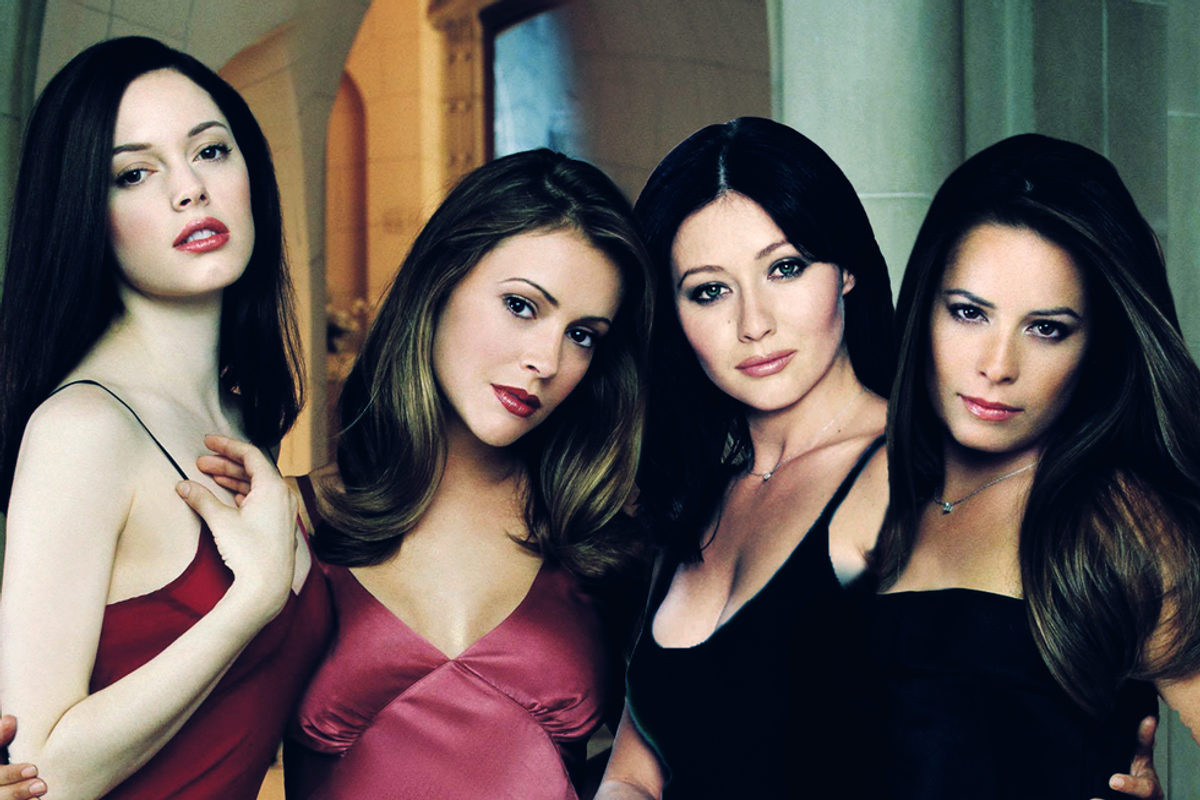 "Charmed” written by Constance M. Burge who also brought us “Royal Pains” and “Ally McBeal”. The show became possible by the infamous executive producer Aaron Spelling (1923-2006). “Charmed” ran for eight seasons from 1998 to 2006. The show started out on the WB and continued on when the CW took over. The story is of three sisters who received their powers (Telekinesis, Molecular Immobilization and Premonition) after their grandmother died. They discovered that they are the prophesied “Charmed” ones, witches who battle evil forces.

Constance M. Burge headed the story by writing about her own family dynamics. Constance has two older sisters, Edi and Laura (Lucas, 1999). The” Charmed” story is about the bond of three sisters. Constance left “Charmed” after season two due to creative differences with producer Brad Kern.

The cancellation of “Charmed” did not sit well with the fans nor the actors. All the contracts for the stars of the show were up, instead of announcing the end of the show, the network announced they canceled the show. Entertainment Weekly did an interview with the three sisters about the shows end. Alyssa Milano stated that, “It’s a really weird thing, and I haven’t been able to articulate it no matter how many times I’ve had a conversation about it.” Holly Marie Combs said, “I was in a great deal of denial.” Rose McGown told EW, “They made a big announcement that we were canceled. I’m like, how is it possible to cancel something that doesn’t exist.” (Vary, 2006).

“Charmed” is not only a series on television (watch the series on Netflix) but series of books published by Simon & Schuster (1999-2008) and HarperCollins since 2015. The season ended in television form with season eight, the comic books picked up season nine and ten thanks to Zenescope Entertainment. The comic books bring's back the spirit of Prue Halliwell, the elder sister who died at the end of Season three. The story of the “Charmed” ones continues on with new comics coming out this year thanks to Dynamite.

Shannen Doherty played Prue Halliwell (the power of Telekinesis), the eldest of the three sisters. She did a great job being the strong and focused sister of the three. She left the show after season 3. Why she left is still unknown, but Shannen’s “feud” with Alyssa Milano is the main “rumor reason” behind the departure.

The departure of Shannen left an opening. The “Charmed” ones known for being the “Power of Three.” Without the “Power of Three,” there are no “Charmed” ones. The writers could fix this problem that touched upon in Season two, episode eight title “P3 H2O” where the girls face the water demon that killed their mother. They found out that their mother was in love with her White Lighter. A witch and a white lighter are not to be together. The result of this forbidden love is a child named Paige (Power of Orbing), played by Rose McGowan, who is adopted by the Matthews family. Paige, drawn to the three sisters, visited P3 many times and watched the sisters from afar. In Season Four, Paige finds out she is their sister as a half-witch, half-white lighter. The “Charmed” ones are now “Charmed” again.

Holly Marie Combs played Piper Halliwell (power of Molecular Immobilization), the middle sister of the three. Piper has a natural talent for the culinary arts. Piper is the one that can look at both sides of the story and try to reason everything out. In season four she became the eldest sister and a motherly figure in the show. At the end of the series running, she becomes the matriarch of the family.

All three sisters have children and Piper broke the mold of a Halliwell only having girl children when she gave birth to her two sons. This lead us to some story lines about the children and what the world would be when the children are adults. When the show ended, it sparked an outcry from the fans to have a continuation of the “Charmed” series featuring the children of the “Charmed” ones. Fans are also wanting a “Charmed” movie. As of right now the fans will see none of those soon, those stories are left to the fan fiction sites. The CW announced on January 5th, 2017 that Jennie Urman, creator of "Jane the Virgin" along with Jessica O’Toole and Amy Rardin, are working with CW in bringing back “Charmed”. CW has said little about the re-imagining of the “Charmed" series, but we know it is set in the mid to late 70’s, starting off in 1976. Ben Silverman, Jessica O’Toole, and Amy Rardin will be executive producers and Brad Siberling will be one of the directors.

How the story will go, we do not know. My imagination is telling me it can be about three sisters in the 70’s instead of 1998-2006. It is also popping in my head it could be the story of Penny (Grams) and Patricia (mother) dealing with Paige being given up for adoption to protect her and protecting the other three sisters, with 1978 being about Grams dealing with the death of her daughter, binding the children and raising them.

What are your feelings of Charmed? How do you feel about this “re-boot?” What do you think the 70’s version of “Charmed” will be about?