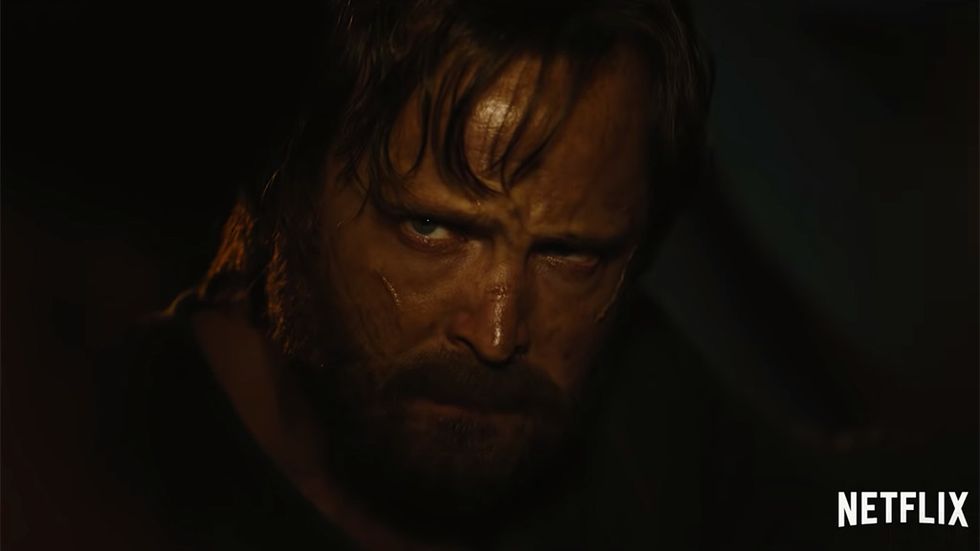 Three months ago, I wrote a little article hyping up the then-untitled Breaking Bad movie, now officially dubbed El Camino, which had been a project that absolutely baffled me in that no one was really talking about it. Breaking Bad is one of the most beloved and respected series in film history, after all. Why wasn't there constant singing in the streets over this project? Except, once I started doing a bit of digging so as to put together an article for the upcoming title, I stumbled upon the fact that there was almost nothing to talk about. At the time, I had practically no information to go on, as Vince Gilligan and the entire team behind the project were keeping absolutely everything about the film extremely close to the chest. The only, and I mean only, real tether I had to work with at the time was the fact that Aaron Paul would be reprising his role as Jesse Pinkman in a narrative tracking the aftermath of the show's spectacular series finale. And even in terms of that second detail I knew neither the time frame nor the distance from the finale. It could be ten years into the future, or mere minutes.

All I could really do at that point was scream into the void, desperately and blindly announcing the coming arrival of a film shrouded in so much secrecy that it was as if I was trying to promote a conspiracy rather than a real and verified film sequel. Luckily, just a scant week or so after I published that piece, a miraculous set of tweets were released by Bryan Cranston and Aaron Paul: a picture of two mules side-by-side with the caption "Soon." This was my saving grace, living proof that I wasn't going nuts and that Jesse Pinkman, Vince Gilligan's most unfortunate son, as well as perhaps Heisenberg himself, would be returning to fans who have never stopped upholding a special home for Breaking Bad in our hearts. It's hard to imagine that the series finale aired over six years ago, and it speaks volumes about the show's astounding social and cultural impact that fresh news over the film brought about immediate media attention and mass fan excitement.

So now that I've sufficiently prefaced everything, sung my own praises regarding the previous article, and hopefully hyped you up a bit for some news, we finally get to the part where I spill everything I've uncovered about the project and share the relevant links. You ready? Alright. Here we go.

Now, with only two and a half weeks left until the film's Netflix release and with an official trailer currently available on YouTube, somehow only precious little is known about the project. But wait!—don't leave just yet. What I mean to say is, the cast and crew are truly doing their best to keep the exact plot of the film hidden, so as to give us the freshest and most entertaining experience possible when we are finally gifted with El Camino. That being said, we still have plenty of promotional content to rekindle our raging love for Breaking Bad and tide us over during these last few agonizing weeks before the premiere. The most exciting of these developments, of course, is our first full trailer, as well as a teaser and a recap-esque promotional video that recounts the sad odyssey of Jesse Pinkman set to "Enchanted" by Chloe X Halle. Cue the links.

Go ahead. Take your time and really absorb those promos. They're all beautifully made, right up to snuff with the level of quality we would expect to be used in the marketing of a Breaking Bad property.

When you've finished, you might even settle in and watch one of those trailer breakdown videos that always crop up like weeds after the release of momentous content like this. If I was you, though, I would avoid those videos as well as you could for the next two weeks. Gilligan and the team have clearly done a lot of legwork to make sure that the plot and direction of El Camino is safely hidden, and getting so worked up over these trailers to the point where you watch a video that nicks at this veil of obscurity seems like something of a betrayal to both yourself and the Breaking Bad team. For now, both in the name of the team that is working so passionately to bring us El Camino and for yourself, I ask that you stick to just watching these videos without slinking over to super-detective aids or breakdown videos. Instead, try and content yourself with the new revelations that Gilligan has purposefully left for us:

The film takes place very shortly after "Felina," revolves around Jesse's escape from law enforcement due to his incrimination in Walt's mass takedown of the Aryan gang, and features the return of such beloved side characters as Skinny Pete and Beaver as they reunite with a Jesse not at all like the spazzy, flippant, and energetic young drug pusher that they had once pal'd around with for petty cash before Walt dug his way in and turned their crappy little lives into pure shit.

Of course, I know you must be aching for more details after getting such a promising tease for the movie—so close yet so far—but you only have to hold out until October 11th to see El Camino just as Papa Gilligan intended, thrown into a chaotic new world of mystery, suspense, and desperation without having unnecessarily spoiled yourself just to pass the minutes leading to the premiere's countdown. Until then, I hope you all can stay strong, evade these spoilers, and spend your spare moments brushing up on all the horror and wonder that is the original five seasons of Breaking Bad.