Black Friday is back to being Black Friday
Odyssey
CurrentlySwoonLifestyleHealth & WellnessStudent LifeContent InspirationEntertainmentPolitics and ActivismSportsAdulting
About usAdvertiseTermsPrivacyDMCAContact us
® 2023 ODYSSEY
Welcome back
Sign in to comment to your favorite stories, participate in your community and interact with your friends
or
LOG IN WITH FACEBOOK
No account? Create one
Start writing a post
Featured 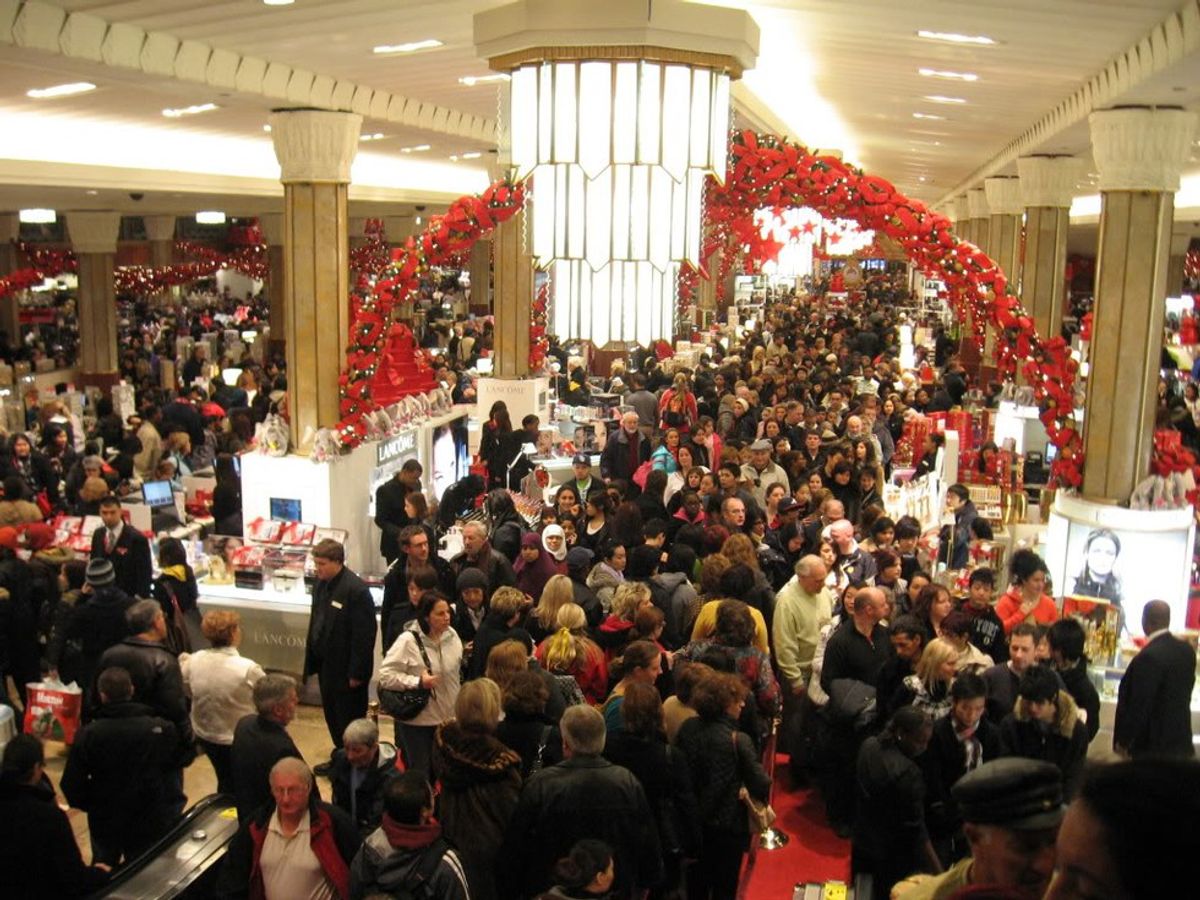 So, are both of these responses acceptable?

For the last few years, my family has sat at the tables set up in my parent’s garage, stuffed from Thanksgiving dinner going through the many newspaper ads, preparing to go out and find the greatest deals around. The same conversation never fails to come up; “pretty soon Black Friday is going to have to be renamed as Black Thanksgiving”. My brother has even gone as far as to say that the chaotic shopping of Black Friday will pretty soon begin on the Fourth of July. My dad repeats himself every year before going in and passing out on the couch watching football; his idea is that it’s crazy that people really have to sacrifice time with their families on this day to work a shift that is totally unnecessary. Nonetheless, myself, my mom, my aunt and my cousin and his girlfriend are always mapping out our excursion for the night.

Three years ago I was a mere sixteen. I only had my license for a month, but my brother and I were still determined to go out and chase the best deals. We mapped out our plan and even had it perfect enough so that I could be back for my “Cinderella curfew” of 11 pm on a junior license. If I remember right, some of the stores opened up as early as 6 pm. My brother, Jake and I had our priorities in order so that we could be in and out, work as a team and be back home in plenty of time. My mom called us totally crazy for wanting to go out into the madness, but I’m pretty sure that my mom ended up joining us and driving us so we didn’t have to worry about being back in time for my curfew.

Since then, the times that the stores have been opening for sales only gets earlier and earlier. Last year I’m pretty sure that the stores opened as early as 4 pm! If any other family is anything like mine, our Thanksgiving dinner doesn’t even start until 1pm and by the time all of us ladies are done gossiping at the table as we nibble on the leftover desserts and noodles, it’s 5 pm at the earliest! I know for a fact that if I were to ever work in retail and had to leave my family to work a shift that should be considered double overtime but probably isn’t (I honestly have no idea if it is or not), my parents would not be happy, if they even left me go.

Luckily, I’ve never had to worry about this. My brother and I both have summer and holiday jobs in the restaurant business which makes it easy to get off for our family holiday events (especially because we have the coolest boss ever).

Although I feel bad for the dedicated workers who have to leave their families to accommodate the madness of Black Friday deals, I’m a hypocrite. I sympathize with those who are forced to come into work, but I’m also a reason that they have to come in. Since I’ve had my license, I’ve been one of the crazies to head into the traffic, the aggressive and determined moms willing to get their son that Nintendo DS at all costs, even if it means possibly losing a limb or eyeball over it. I live for going thru ad after ad and finding the best deals. But then again, I’ve always been a shopaholic and will use any excuse to get my retail fix of spending money.