A Bittersweet Change to Music
Odyssey

A Bittersweet Change to Music

An Interview with She Bleeds Merlot 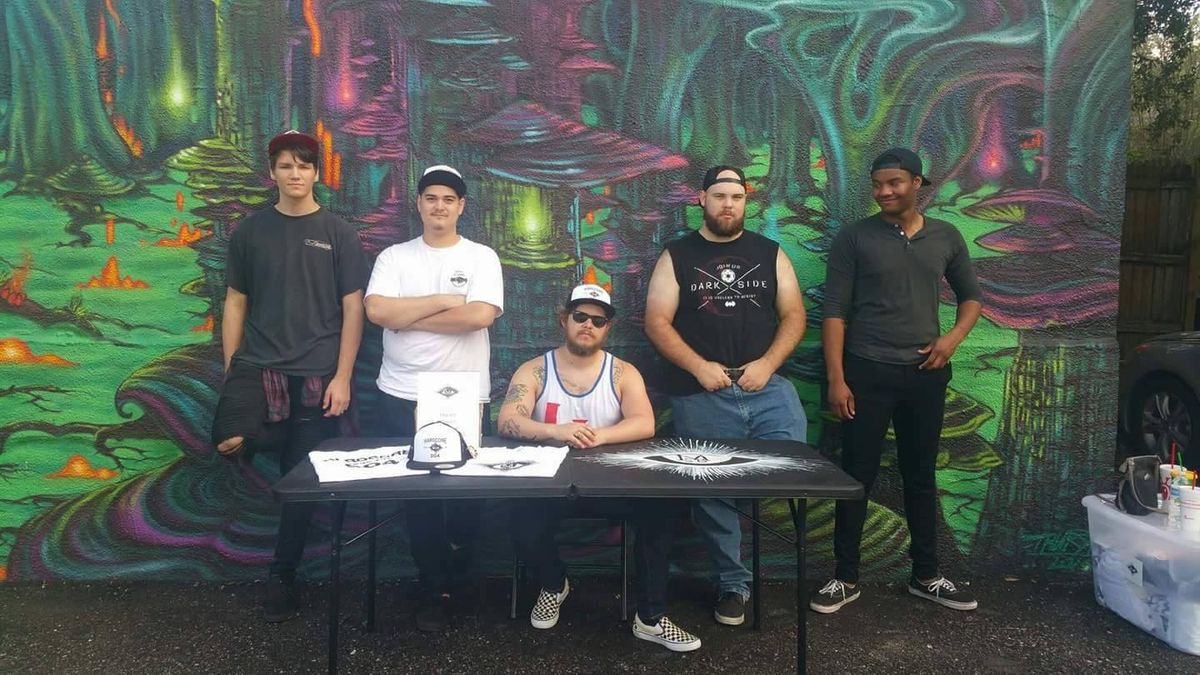 Recently I spoke with band She Bleeds Merlot about life, music, and the new projects that this band has in the works. She bleeds Merlot’s music can be found on Spotify before Oct 13th, as well as all other major streaming platforms. Also be sure to check on Facebook, Twitter, Snapchat, and Instagram for any other news and update, as well as www.shebleedsmerlot.com.

Thanks guys and welcome! So let’s start this off by telling our readers a little bit about yourselves?

Ryan: “I’m 23, started out playing percussion and recently switched to bass right before joining She Bleeds Merlot. I enjoy range shooting, photography, and voice acting. I love dogs and tequila.”

Quinton: “I’m a 19 y/o sad boy who spends his time messing around with computers, skateboarding, and reading John Green novels.”

Dre: “I’m 20, and I enjoy working on cars for fun. I spend most of my time playing drums and mixing music.”

Tim: “I’m 23, and I enjoy cooking. I spend most of my time writing new music or fishing.”

Cody: “I’m 25, currently in school to become an RN. I enjoy spending time with my wife and dogs, and I love to read.”

Drums, skateboarding, reading books, and cooking! I can see us getting along really well guys haha. Good stuff, good stuff. So how did you guys meet?

The band started with Cody (vocals), Quinton (guitar), and Dre (drums); however, Tim (guitar) and Ryan (bass) joined in early September. We had 5/7 tracks on the EP fully written before they joined, but their influence definitely showed up on Lost Property and Critters & Captives.

That’s pretty cool. It’s always good to have a little bit of everyone’s influence when it comes to making a piece of music that will represent what you guys want to be seen as. So every artist or band has set bands or artist that influence them musically, Who are some of yours?

Underoath, Pierce the Veil, and The Pixies have definitely made their mark in the music industry as some of the greatest bands of all time, they are also some of my favorites as well. How long has the band been together?

She Bleeds Merlot was officially founded in March 2017 in Jacksonville, Fl.

So fairly new, there’s nothing wrong with that. You guys will have plenty of time to make your marks, I’m already a fan. Just from hearing all of your music influences, I’m obviously pretty excited to hear some new material. So if you guys had to pick some bands or artist, whom or what would you say your music sounds most like?

We generally say our music is great for fans of: The Ghost Inside, Bring Me The Horizon, Stick To Your Guns, Avenged Sevenfold, and A Day To Remember. In all honestly we borrow influences from all over the spectrum, though.

Production quality for sure. We took the plunge and produced our EP through Andrew Wade’s studio (Wade has produced albums for ADTR, The Ghost Inside, Wage War, and Motionless in White), and our audio engineer is Wade’s apprentice Nick Pilotta.

That has to feel amazing working with the same people that worked with a lot of your favorite bands. I would be haha. So I want to switch gears a bit and talk about some other stuff. How do you like life on the road?

It can be very stressful, but we’re always excited to play in a new place and meet new people.

Where is the best place you have ever played?

Honestly it’s impossible to choose, because we’ve yet to encounter an unfriendly crowd, but our favorite venue (so far) is Nighthawks in Jacksonville, Fl. It has that small, intimate vibe, plus all the staff are friendly.

I feel the smaller venues are always pretty great, I honestly will take those over huge concerts any day. It really does feel like you can connect with the fans better that way and the fans have a more intimate connection with you, so in that respect I totally agree. What is the writing process like for you guys and what topics do you guys like to write about?

Sometimes one of us has a strong vision for a song and the rest of us catch on, and sometimes we just all attack it like a free-for-all and the music just falls into place.

When you guys perform, do you do any cover versions of songs in your shows?

Not as of yet; however, we’re planning to release our own rendition of Points of Authority by Linkin Park, in honor of Chester Bennington. Chester was a huge influence on many of us.

And I really can’t wait to hear that. I hope there will also be some digital download of that at a later time. It’s one of my favorite songs by them. If given the chance to work with anyone musically who would it be?

That’s pretty neat, no arguments there. If people wanted to know more about you, does the band have a website and where can we find your music at?

Yes! We’re putting all of our music on Spotify before Oct 13th, as well as all other major streaming platforms. We are also on Facebook, Twitter, Snapchat, and Instagram. Our website is currently under construction, but the domain is www.shebleedsmerlot.com

Let’s switch gears again haha, maybe it’s because I’m hungry as well, I know most people have a favorite food. What's yours?

Yummy! I’ve made vegetarian versions of a lot of those dishes, so can agree to an extent that all of those are very good. Okay back on the music track of things haha, how did the band come up with its name?

Cody had given it as a name for a song written by one of the original members. While the band was in a transitional period we decided to ditch the song, but kept the name. At that point, our music had been described as “bitter-sweet” so since Merlot is a bitter-sweet wine we decided to make it our new name.

That’s pretty interesting.Were any of you in any bands before this one?

Yes, actually. Dre started as a drum cover artist, and Quinton was in an Alternative band called Colonize The Moon.

I honestly love the drums, so drum covers will always be pretty amazing to me. It takes talent to produce any kind of cover with an instrument, but I feel with drums there are so many amazing ways to create such amazing dynamic sounds. So this is one of my favorite questions because of different interesting answers I get.
Any show or traveling stories you want to share with us?

Ryan had someone who looked like a crackhead grind on him after one of our shows to Usher.

Haha! Um, that must have been a very enlightening experience. I wouldn't even know what to do in that sort of situation. So I’m sure fans also want to know this,what are some thing you guys do for fun?

What kind of clothes do you wear onstage?

Sounds good to me! Any upcoming shows ?

We’ve got a few on the books currently. Oct 8th in Largo with The Bunny The Bear, Nov 4th in St. Augustine with Phantoms, and Nov 11th in Fort Myers with some awesome local support.

Does the band have any plans to get signed or do you feel being more independent is the way to go?

At this point, we’re just writing music that we’re proud of and doing our best to share it with as many people as we can. We are speaking to a few labels, but have not taken any major steps towards signing.

Understandable. Where does the band see itself six months from now?

(Hopefully) still doing what we love, touring and writing. We’re aiming to have a full-length album out by the end of 2018 or early 2019.