Ariana Grande is a Spokeswoman for Mental Health

Ariana Grande Is The #1 Spokeswoman For Mental Health 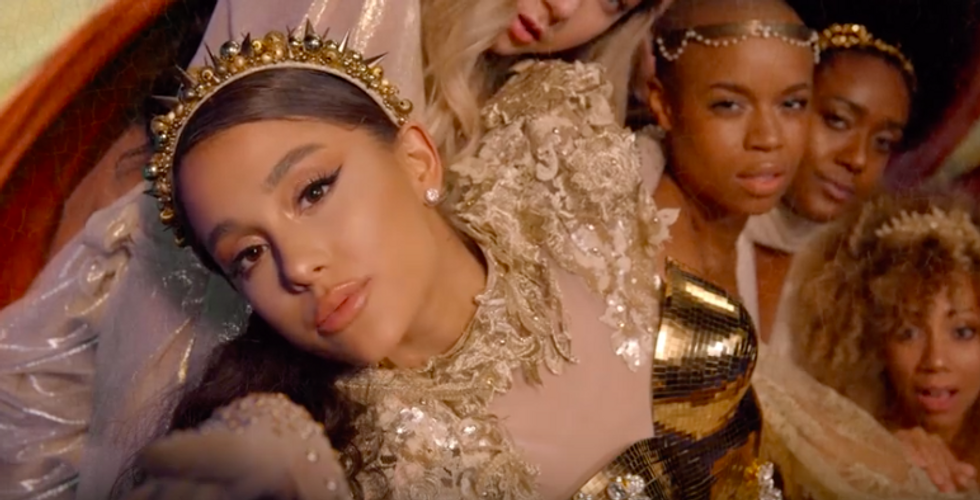 Ariana Grande's new album "Sweetener" was released almost two weeks ago this Friday and people believe it's been more of an influence than ever before. Going from her very first album, Yours Truly, Sweetener leaves more of a mark by expressing everything that she has experienced in the last year. With a feminist track appropriately titled, "God is a Woman" and energetic, get-up-and-dance songs like "Borderline" and "Sweetener," people have taken more of an interest to her powerful songs that look more into her internal struggles.

This is one of the best songs she has ever written in her career. Hands down. Named "breathin," you can probably guess what it's about. That you have to the breathe even when the times are getting tough. Breathing really helps when you have anxiety or any type of mental health struggle so she wants people to know that all you have to do is just sit and breathe for a little bit.

With lines like "some days, things just take way too much of my energy, I look up and the whole room's spinning" and "feel my blood runnin', swear the sky's fallin'", she wants people to understand that her life isn't always as perfect as we might think it is. After everything she went through, she explains the symptoms of anxiety and having anxiety attacks. She also explains that she has depersonalization, which is a disorder that makes things seem unreal.

She just wants people to know that it's okay if you feel like this, but don't work yourself up because it's only going to make it worse. You just need to sit down and relax and breathe to calm down.

My personal favorite song on the entire album is supposed to give you insight as to what her anxiety attacks or just anxiety attacks, in general, can seem like. After the terrible terrorist attack that happened at the end of her concert on May 05, 2017 in Manchester, it was completely normal that she would experience things like anxiety and PTSD to cope with what happened. While listening to the song, you hear layers and layers of vocals and lines that give you the understanding of what those little voices in your head are like. Ariana herself replied to a fan on Twitter asking what the song was about and she replied, "it's ab my anxiety. I felt like I was floating for like 3 months last year & not in a nice way. like I was outside my body? was v scary and I couldn't breathe well. so it's ab that. & lots of voices in my head singing."

With one line in the song "This is for everybody", it shows that she wants these songs to mean something not only to her but to other people that are struggling with the same things she did. She wants people to understand that they aren't alone and even celebrities like her struggle with mental health.

Toward's the end of the song there is a verse that says "Here's one thing you can trust, yuh, it takes you and me to make us, one of those days you had enough, I'll be there..." Even though she is unable to personally go to every fan that has their days where it's just been enough, she wants them to know that she is always going to be there for them and try to help them through it.

Originally, she said that she had taken out some of the material that was very honest about her struggles but instead decided that it wouldn't be fair for her or the fans that go through similar things. She says, "I don't want to hide any pain from them because I can relate to their pain. Why not be in it together?"

Further, into the song she shows the voices in her head telling her that she has to take care of herself and shouldn't be afraid to talk about it to the public or her family. Her mind wants her to be okay and wants her to be healthy. Which is why she wrote this song, to show the world that this isn't going to stop her but is going to come out stronger in the end.

Finally, the song length is 5 minutes and 22 seconds which is the date of the Manchester attack and has 40 seconds of silence at the end to honor the people whose lives were lost that night.

As someone who deals with anxiety and depression daily, songs like these really speak to me. It helps to know that there are celebrities that struggle with things like this as well and that I'm not alone. Mental health can really get overlooked, especially because I don't believe it gets talked about enough but for someone who has the platform like Ariana does, helps bring awareness and some light as to what people may be feeling.

"Mental health is so important. People don't pay enough mind to it because we have things to do. We have schedules, we have jobs, kids, places to be, the pressure to fit in, Instagram Stories, whatever facade you're trying to put on, trying to keep up. People don't pay attention to what's happening inside. That's why I felt it was important, I just wanted to give people a hug, musically."