The day I caught my first snake went nothing like expected. 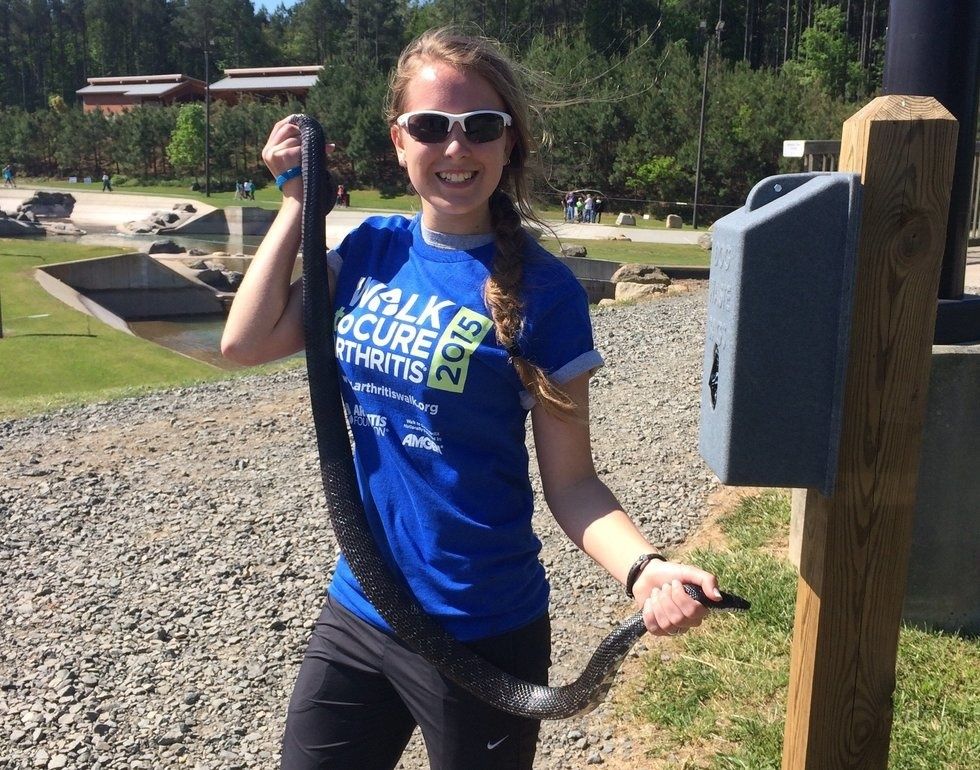 Ever since I was a little girl, I envisioned how my first snake-catch would be played out. Maybe it'll happen during a trip to the Everglades to catch invasive Burmese pythons. Or maybe it'll be to get a snake out of a neighbor's yard. I had ideas about how it would happen but, as often occurs in life, when I actually caught my first wild snake, it was a fairly unexpected event.

On May 2nd, 2015, I volunteered at a 5K race called Walk to Cure Arthritis, which was located at the White Water Center, a really neat place to hang out for outdoorsy people like myself. My responsibilities included helping set up tents and tables, filling cups and coolers with water and taping the race path. We started setup early in the morning and were there to watch the sun gradually rise over the treetops, revealing more of its rays every few minutes.

Knowing a fairly good amount about animals, it crossed my mind that animals — especially reptiles — enjoy coming out of the woods with the sun to bask and warm themselves. It didn't occur to me, though, that I'd see anything other than a few lizards, birds, and maybe a rabbit or two.

I was later proven wrong.

The first flight of runners was sent at around 9:30. I was stationed at a water cooler where I was tasked with handing out water to those who needed it. A while after the first group was sent off, the group of walkers started their race. Not long afterward, as we continued to hand out water, I started hearing a lot of commotion about something on the path. At that moment I tuned my ears to hear more about what they were saying as the word "snake" became more frequently mentioned.

I distinctly remember hearing one woman say, "There's a big ole snake over there in the middle of the pathway." My heart jumped and I put the cup of water I was holding back on the table. Trotting down the gravel path, I looked for either a congregating group of people or the snake they would be staring at. Noticing a break in the steady flow of people, I saw the fairly decent-sized snake I presumed to be a black rat snake (the coloration, roundness, and length of the creature that, in combination, led me to believe this.)

As even more people began realizing what was there in the pathway, I quickly became alarmed for the snake's safety. Not wanting it to be harassed, trampled or killed, I made the decision to catch and relocate the creature. There was only one problem: I'd never caught a snake before, let alone a wild one. Granted, I'd handled different snakes often, including my pet ball python, an assortment of snakes that other people had caught, or ones handled by professionals, but there's just something different about reaching down at one that could easily — and quickly — bite you.

I shoved all of this aside in my mind, however, and went for it. I figured I knew enough from both observation and common sense that would allow me to safely catch the snake. First reaching for its tail, I tried to gently gesture the snake over towards the brush. He wasn't having any of it, though, and continued to realign himself so as to face the gravel path.

In a few quick footing adjustments, I found myself behind the snake, reaching for the back of its head with my right hand. I grasped its neck, but not close enough to the back of its head: in a lightning-fast strike, he turned around and bit my hand. Refusing to be deterred, I slid my hand up closer and placed my thumb on its head so as to secure my grip on the writhing snake.

Shocked, I stood upright, snake in hand, people staring. I was smiling bigger than ever; I had just caught my first wild snake! Absolutely elated, I went over to someone and asked them to take my picture. After showing him off a little bit, I decided that it was about time for me to let him go. Finding a secluded brush area, I set him down and watched him slither into the growth.

I learned something valuable during this whole fiasco: no matter how prepared I feel to handle a wild animal, I must never feel too comfortable in any given situation. This lesson was important to me because I intend to pursue a career in animal handling; it was a humbling reminder that, though we can be prepared and knowledgable about handling animals, we must always be on our toes.