Senior Alexis Cain is the very first college woman with Down Syndrome to rush a social sorority on Murray State's campus. 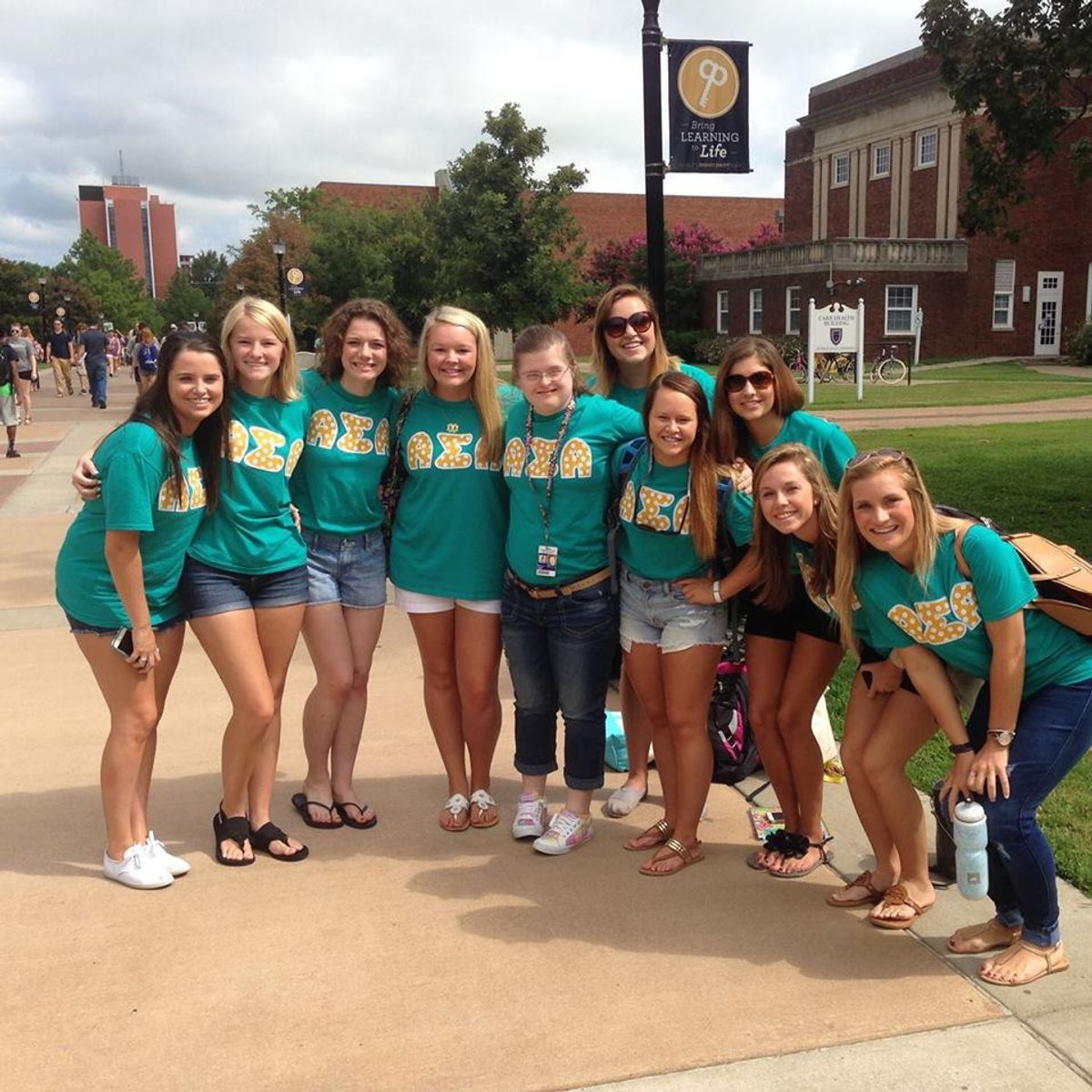 When I questioned multiple different women on campus involved in sorority organizations, what sorority life meant to them, everyone's answers sounded the same: a clique of college women who are all connected by ritual—a sisterhood.

A sisterhood is something Alexis Cain, a Murray State senior diagnosed with Down's Syndrome at birth, wanted to be a part of. Cain is a part of the College to Career Experience (CCE) at Murray State and is also a member of Best Buddies: a program that pairs people with intellectual and developmental disabilities in one-to-one friendships with college students.

Just over a year ago when Alexis started bringing up her interest in sorority life, Alexis's mother Camme Cain, stated that she thought it was just that: Alexis talking about it.

"When she gets something in her head, she goes full tilt," Camme said. "All I've heard all summer is wouldn't it be great to have alllllll these sisters?!"

Alexis went through formal recruitment at Murray State, starting Aug. 12 and ending on Bid Day, Aug. 16. Formal recruitment is hosted by Murray State's Panhellenic Council which consists of four full days of meeting and getting to know each sorority, followed by an elimination process to narrow down which sorority you would want to receive a bid from. On the last day of recruitment, Bid Day, Alexis received and accepted a bid from the Beta Nu chapter of Alpha Sigma Alpha.

I got to personally watch and experience the very first college woman diagnosed with Down Syndrome receive a bid from a social sorority at Murray State University. The room exploded into a standing ovation, hugs, and lots of happy tears from almost everyone. I've never been a part of something so powerful and moving, and to be able to experience that was one of the most life-changing things to happen to me.The applause and emotion in the room was so powerful, and the thought of it still gives me chills. Here's a link to the video, posted by Best Buddies Kentucky, of the moment Alexis received the bid followed by a welcoming from her new sisters in her pledge class. (Click here for the video!)

Joining a sorority is a life-changing experience, and the importance of Alexis joining one of these organizations on campus is very huge. It will help people understand disabilities better and teach many people to open their minds more.

"Kids with disabilities get left out as their life goes on," Camme said. "It's sad, but true. Mostly they only have family that thinks about them, therefore, they typically get left behind; not many friends or places to go. Sure, they have Best Buddies and Special Olympics activities, but there's not much out there in the real world. It's just a fact. That makes a very lonely life for them if they don't have anyone other than family. Alexis feels very proud to be a part of this group of outstanding ASA young women, and I hope that their decision to accept her will change the attitudes of others as well for a long time to come. She makes you want to be a better person after you've spent time with her."

I was lucky enough to interview Alexis and see what she was thinking during recruitment and what her plans are after she graduates in December.

1. How do you feel about being the very first college woman with Down Syndrome to rush a social sorority at Murray State?

"It felt really good to know that the girls wanted me to join their sorority. They make me feel accepted and really welcomed me into their group already and they feel like the sisters I’ve never had. All summer I’ve talked about how it would be so great to have a lot of sisters, and now I have over 140! Not to mention extended sisters in other sororities too! It doesn’t get much better than that!"

2. What impact would you like to leave on your organization?

"I hope that they see what I can bring to the group. I want people to have open minds and help them to see and understand that because of my learning disability, I am really like anyone else. I have feelings, I like to help people, I’d like to have a job one day, and I hope that others will see that just because a person has a disability it doesn’t mean that they are that much different. No one likes hearing the 'R' word. It’s not very kind to say about another. I can tell that my sorority loves me already and are already my biggest supporters."

3. What do you plan on accomplishing after you graduate in December?

"After I complete my college program, Mom and I have discussed opening a business together. And not just a business that I can work at, but maybe other people that have similar disabilities or handicaps. Not all places want to hire someone that has a disability or a handicap because they might not be able to do the work as fast or as well as others. And also, meeting Taylor Swift and Nick Jonas is one of my biggest dreams to have come true someday!"

Alexis is one of the most down-to-earth girls I've ever met, and she's a wonderful friend that I'm always going to be grateful for. There are so many girls throughout campus that look up to her, and it's no surprise that they do. I'm so excited to watch Alexis grow, and I'm even more excited to watch sorority life grow and evolve with Alexis now a part of our Greek community.

And if you happen to know Taylor Swift or Nick Jonas, hook a girl up and help Alexis out!
Report this Content
This article has not been reviewed by Odyssey HQ and solely reflects the ideas and opinions of the creator.