Short Stories On Odyssey: A Nightmare On Halloween

Short Stories On Odyssey: A Nightmare On Halloween

The rain starts pouring down hard. Ben takes a shortcut through the woods. Leaves crinkle underneath his feet as he trudges. 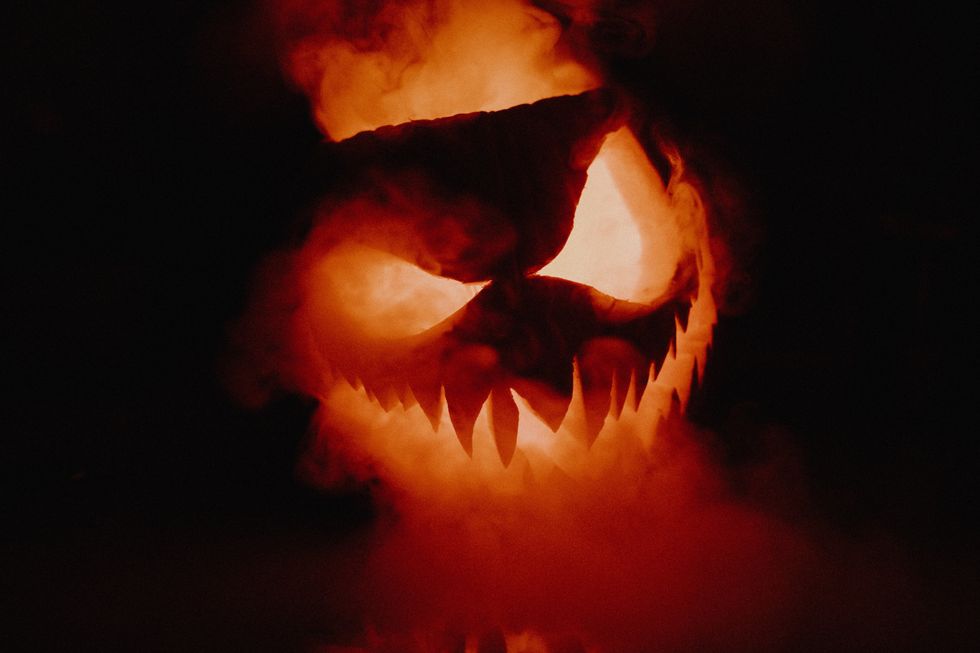 It's a mild yet moist afternoon in late October. It's Halloween. Ben is sitting in his living room watching TV. Ben is in third grade. He came home from school about two hours ago and has been watching TV since then. Every few minutes he takes a glance outside, checking for rain.

"You should start your homework now, Ben!" his mom hollers from the kitchen. "There's no homework tonight mom, it's Halloween," Ben calls back.

"Okay, well maybe you should read a book," his mom suggests, "You've been watching TV for two hours now."

That evening, Ben and his parents are sitting at the dinner table. His dad is perusing a magazine while his mom is checking her email on her tablet. There is a light drizzle outside. After dinner, Ben puts on his Power Ranger costume. His mom finds a flashlight and takes Ben trick-or-treating. The rain intensifies.

"We should head back home now," his mom tells Ben.

"Just a few more houses please," Ben whines, "I hardly have any candy."

"It's getting too dark," his mom says back. "We should head home."

Ben continues to march forward. His mom releases an angry sigh and walks behind him. The wind picks up speed. The leaves rustle around and spiral. Raindrops begin descending again at a drizzle. They walk across the community to a family friend's house. Ben rings that door. "Trick-or-Treat," Ben squeals.

"Happy Halloween! It's so nice to see you again," Mrs. Smith tells Ben. She offers him some candy. She looks up at Ben's mom and smiles. "How have you been lately?" Mrs. Smith asks Ben's mom. "I've been doing pretty well as usual. Ben has been all excited for Halloween for almost a week now. I tried to convince him that we should go back home at this point, but he wouldn't listen," Ben's mom says. "Oh, don't mind it. He's just a kid. Just let him have the fun that he wants on Halloween," Mrs. Smith insists. Ben's mom grins. "Let's go, Ben. We still have two more houses to visit before we go back home," instructs Ben's mom.

They walk a few hundred feet to another house. The rain falls faster. This house happens to be where Jill Price, a colleague and close friend of Ben's mom lives. Ben rings the doorbell. Ms. Price opens that door. "Hi, Ben! Happy Halloween! How about you and your mom both come inside?" says Ms. Price. They both go inside.

Ben's mom and Ms. Price are chatting in the breakfast area. Ben lies down on the living room sofa, staring at the ceiling, waiting for his mom to finish talking. Then, he becomes impatient and decides to go back outside. He quietly slips through the breakfast area where his mom and Jill are chatting and leave the house. He makes a right and walks over to another house and rings the doorbell. For a moment no one answers, but the curtains on the second-floor shift. A black cat appears on the windowsill of the window to the right of the door. "This is pretty creepy," thinks Ben. There is a thump from inside. "Okay, never-mind," he whispers to himself. A window opens, but it's pitch-black inside. "Ahhhhh!" he screams as he dashes away.

The door opens. The lights flick on inside. A young man in his late 20s walks outside in his pajamas with a bowl of candy. "Hmmm, that's odd. Maybe I just scared them away," he says to himself. His black cat crawls outside and sits on the sidewalk leading to the front door. He walks over to his cat, picks it up, walks back inside, and goes back to bed.

Ben runs past a couple houses down the street. He stops by a well-decorated house at the street corner. A middle-aged woman opens the door. "Happy Halloween, but we ran out of candy, sorry," she tells him in a sweet tone. He turns around and walks back toward Ms. Price's house, feeling remorse. "Darn, I didn't get any more candy," he whispers to himself.

The rain starts pouring down hard. Ben takes a shortcut through the woods. Leaves crinkle underneath his feet as he trudges. It's almost 9 p.m. now. Ben is soaked. It's almost completely dark in the woods except for the street lights on the other side. Without noticing, he trips over a large fallen branch. "Owww!" Ben shrieks. He groans. As he stands back up, a group of bats fly by. Ben feels a shiver of down his legs. He hadn't expected the woods to be so creepy at night. He continues forward cautiously. Then there is a scurrying sound. He pauses to listen. The sound stops. He keeps walking. A raccoon runs over his shoes, brushing up against his legs.

Ben screaks, "Eek!" makes a leap and then pauses. He leans against a large oak tree, panting from a moment of fear. He closes his eyes and imagines that he is back home sleeping on his big. He wonders how worried his mom is right now since she probably found at this point that he is missing. He opens his eyes, wanders around for a few steps. Then, he finds a clearing in the woods and looks around until he spots the glows of street lights and houses. He skips quickly and cautiously as he makes his way out of the woods.

"It's getting pretty late now, it's past Ben's curfew," Ben's mom points out. "Yes, indeed. It is past nine now. You two should get going," Ms. Price remarks. Ben's mom goes to the living room to find that Ben has left. "Ben!" she calls. "Oh, dear. Where could he be?" she wonders. "How about you look outside? I'll come with you," Ms. Price remarks as she pulls out two flashlights from a drawer. They put on their shoes and open the front door.

Ben continues sprinting as fast as he can until he sees Ms. Price's house. The front door is open and waving beams of light are moving around. "Uh, oh," he thinks to himself as he runs closer. "I found him! He is coming towards us!" Ms. Price hollers to Ben's mom. She runs to him. "Thank goodness you are safe!" Ben's mom says, with a sense of relief. "That's it for you, young man. We should have been home an hour ago!" Ben's mom scolds Ben.

Madison Franz
The Narrative
1111482
Photo by Brooke Cagle on Unsplash

Madison Franz
The Narrative
651545
Photo by Manny Moreno on Unsplash