See if you can identify the references and adult jokes you may have missed in the film! 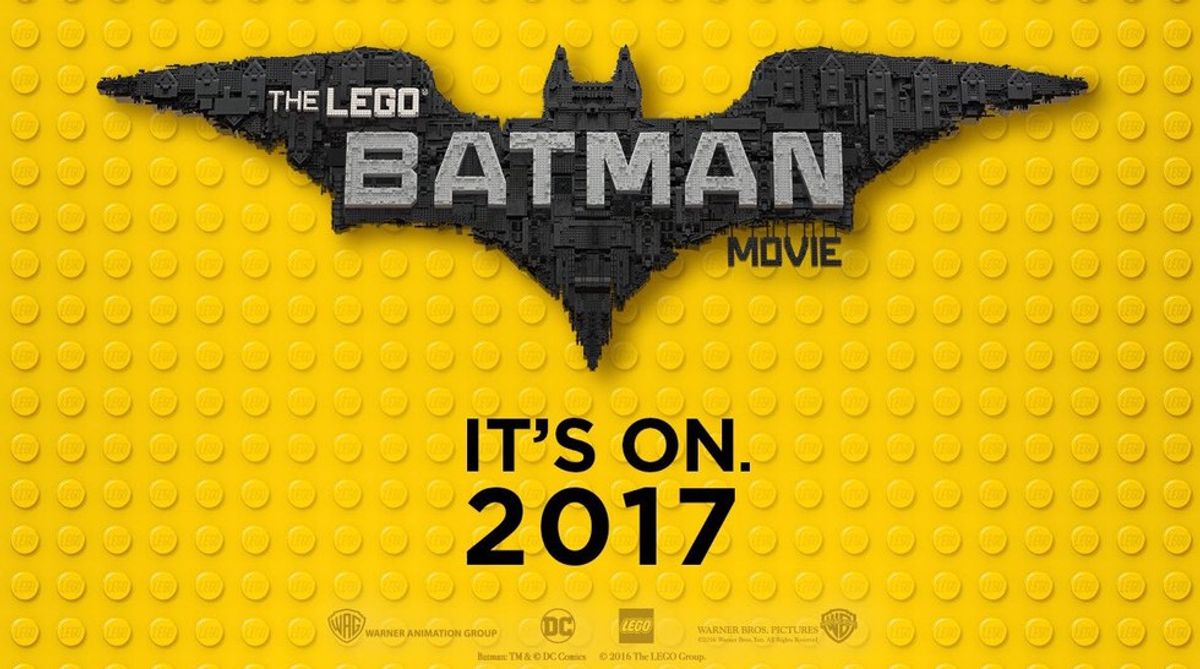 This weekend Warner Bros., DC, and Lego graced us with a fresh new look at Batman...in Lego form! The Lego Batman Movie is what we were waiting for after falling in love with his cameo appearance in The Lego Movie. But this isn't just about the Legos! If you're a big Batman or DC fan, love crossovers between other Lego sets and enjoy pop-culture references--you are in for an action-packed comedy that will delight movie-goers of all ages!

Take it from me--my boyfriend and I (who are in our mid-twenties) were probably the only adults without children with us and we were completely invested in the film. A film about our favorite childhood toys in superhero form, I must add.

Let's look at the top five ways The Lego Batman Movie totally rocked our adult worlds and made us feel like kids again:

1. The entire plot is pretty deep:

To sum up the plot: The Joker is trying to prove he is villain worthy to Batman and is determined to be his arch-nemesis. Because what is Batman without The Joker and vice versa?

Basically The Joker (voiced by the hilarious Zach Galifianakis) is devastated to find out that Batman doesn't consider him to be his arch-nemesis because Batman doesn't care about anyone but himself--and he makes that very clear to The Joker (hence the sad face provided above that completely shattered my soul during the film). It was quite a deep moment in the movie. Like a movie breakup almost...

The Joker is hurt to know that Batman doesn't even think about or fear what the Clown Prince of Crime is going to do next. So what does the Jester of Genocide do? Well--see for yourself at your local cinema. But I can let you know he wants his title as arch-nemesis to Batman and he will do anything to get that!

Can you believe they make us feel bad for The Joker? I wasn't expecting that. Pretty deep for a kids movie, huh?

2. The film includes easter egg villains for us old-timers and extreme Batman fans!

The Lego Batman Movie features over 39 original villains Batman has ever come in contact with. One of the jokes in the film is when The Joker is listing off all the villains he plans to take down Batman with, the person he is talking with openly admits he doesn't believe all of those villains are real. The Joker tries to reassure us by telling us to check Google for reference.

The best part? If you're a nerd and know Batman's origins--you know darn well that all those villains listed were based on original characters. This includes lame villains such as Calendar Man, Calculator, Polka Dot Man, The March Hare (dressed as a rabbit), Egg Man (who literally just throws eggs), Gentleman Ghost (a snazzy-dressed ghost in a top hat) and my favorite Condiment King (pictured above)... the list goes on.

Take The Joker's word on it and Google these hilarious and very real rivals over the years. The best BEST part? These 39 don't even include the crossovers from other Lego sets that Batman battles later in the film. Which brings me to my next point:

So remember when I told you guys The Joker was really upset? Well he rounds up a cavalcade of bad guys that go beyond the DC Universe to get back at Batman with a vengeance. Kids may not know some of these baddies, but might be growing up with them now that Lego is bringing them back.

The audience gets to see hilarious cameos from:

-The Kraken from Clash of the Titans (not the reboot)

-The Wicked Witch of the West from The Wizard of Oz

-Voldemort from the Harry Potter series (which btw Voldemort voices Alfred but not Lego Voldemort--like what?!)

-Sauron from The Lord of the Rings

-Agent Smith from The Matrix

...and my favorite: the "80's monsters" as Robin referred to them as-- Gremlins, the classic mischievous creatures from the title film of the same name...and there's many more beyond that.

That's a lot, right? Well, leave it to Lego to entertain the adults and kids and remind us that we are in a world of play where anything can happen and anyone can show up. Because why not have Batman battle gremlins and our favorite British robots? There's no limit with Legos!

4. Everything and anything Batman is mentioned...all the time

We get to see some 60's Batman clips, references to ALL classic Batman movies (including the Tim Burton ones from the 80's and our most recent BVS) in some way, and they even referenced the shark repellent (which ended up being useful at one point in time in the film).

I can't even list all of the pure pop-culture gold they included in here, but it definitely goes beyond the kids' heads is meant to be a nice nod to the adults who grew up with so many Batmans and stuck with him throughout his various journeys. I mean you know you're a dedicated fan when you go to see one of your favorite heroes in Lego form.

5. You forget you're watching a movie about Legos

Okay so this can relate to kids and adults...but you become so invested in the plot that you forget the characters are little brick people who can solve most of the problems in the film by being Legos. That's why the clever creators of Warner Bros., Warner Animation Group, and Lego are there to remind you that the resolution to the plot is much simpler than you think.

At one point in time, we're reminded that Gotham City is built on two very thin plates (you know...the ones you build the sets on when you build Legos?) and that breaking these plates can cause Gotham to fall into the giant abyss (the human world--the one that Emmett fell in from the previous Lego film). And apparently, it smells like dirty underwear.

Not only are our fourth walls broken by reminding us that we have become emotionally invested in the fate of these little brick people (who are near and dear to our hearts--and have been since childhood), but we discover that our imaginations can do anything. We allowed ourselves to imagine and entered a creative world. We didn't have to think realistically about it. Because they're Legos! We can do anything as long as we use our heads (you'll see what I mean literally and figuratively when you see The Lego Batman Movie for yourself)!

They make a "Dick" joke:

Richard Grayson (Robin) and Bruce Wayne meet for the first time and Richard introduces himself... but says kids at the orphanage call him "Dick." To which Bruce Wayne replies with half-listening: "Yeah kids can be cruel sometimes."

Tell me that wasn't meant for the older audience. Yes, I giggled. I am an adult.

Go see The Lego Batman Movie at your local cinema! And no, you don't have to take the kids...but they'll get a kick out of it too. After all, it's Batman we're talking about here. Enjoy!