5 Reasons Why You Shouldn't Start Vaping 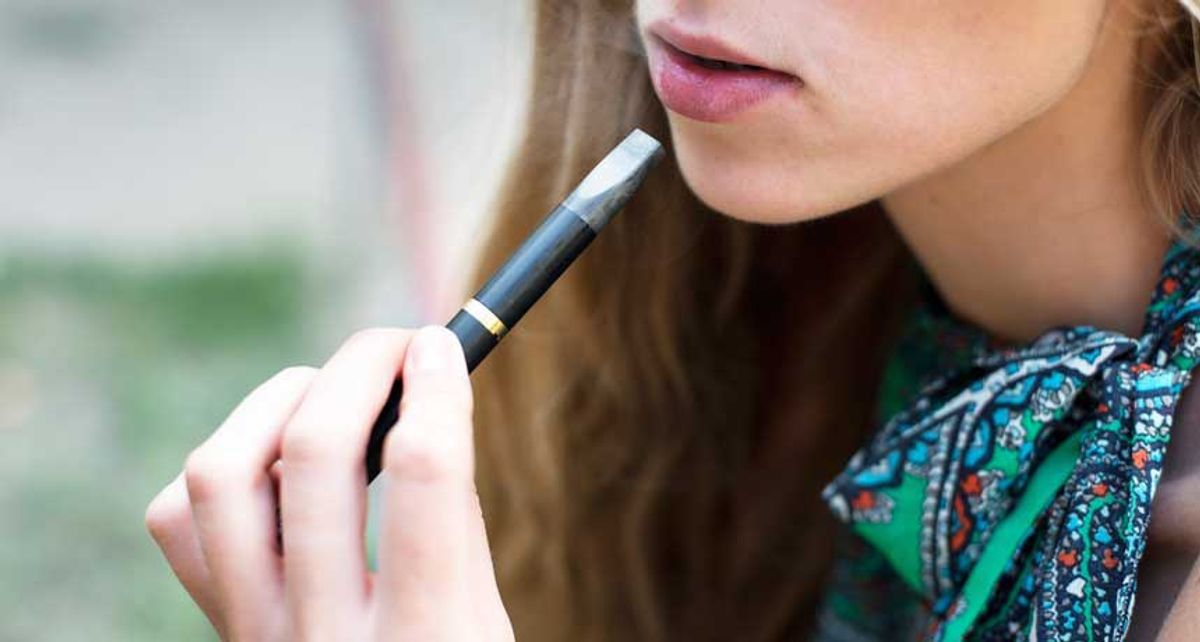 Every day, we see more and more people starting to vape. People who you used to see with a cigarette in their mouth have moved to vaporizers! While you may not want to admit it, the thought of buying a vaporizer may have even crossed your mind as well. At least it's not as dangerous as smoking a cigarette, right? Well, it may not be the harmless habit you thought it was. So, before you hand over the $200 to buy one, think of these five reasons not to start vaping.

1. No matter what the form, nicotine is still bad for you!

Yeah, shocker right? Well, believe me, I have heard many people say that they stopped smoking and started vaping, claiming that it's a risk-free way to get nicotine. No matter the method, nicotine is still detrimental to your health. Not only is nicotine a highly addictive substance that is harder to quit the more you consume it, it also causes inflammation to the lungs and reduces the tissues in the lungs barrier to harmful outside subsentences. So no matter if it's a patch, gum, or vape, nicotine is always harmful to you!

2. Vaporizers are not FDA regulated.

While cigarettes, "roll-own" tobacco, and smokeless tobacco are regulated by the government, vaporizers are not. While a can of Red Man may have "May cause mouth cancer" right on the package, vaporizers and vape juice do not have proper warnings on their products. Many people (while using vaporizers) have reported pneumonia, congestive heart failure, disorientation, seizures, and hypotension as side effects, but these side effects cannot be proved since few studies have been done for effects of vaporizers. Also, there are very few rules that are put upon the manufacturers that are making these products. Reports of the dangers of vaping juices are also growing. Since no one really knows the true ingredients. Also, it is easier to overdose on nicotine with vape juice. The safety of these juices is really unknown.

3. Vaping does not help with quitting smoking.

Maybe you want to quit smoking, so you cough up the hundreds of dollars to buy a vaporizer and you quit! Well, to be honest, you didn't truly quit anything: you just traded one addiction for another. While vaping takes out all the known harmful chemicals in cigarettes, you still are keeping the same nicotine intake as you did with cigarettes. (Maybe even more.) Another problem is that vaping can become quite an expense with the big batteries you're having to change, the tanks, the rigs, and the juice. This all adds up quickly! I don't know about you, but when I spend a pretty penny on something, I want to get my money worth! So if you're trying to quit smoking, maybe try another method. Get your friends and family to help you and stay committed. You'll be amazed at what you can do when you put your mind to it!

We've probably had all seen the guys with the big vapes around town. You know the ones. When they take a hit, it looks like a steam train! These vaporizers take huge batteries to have the power to create all the water vapor. Now anything that has a battery is risky to use, be that a cell phone, laptop, or car. A battery carries the possibility of exploding at any time. While using a vaporizer, some people have reported severe damage to their mouth and teeth due to explosions. I wouldn't go as far to say they're "ticking time bombs," but please proceed with caution.

5. The health risk of vaping.

We have already covered a lot when it comes to health risks such as side effects and nicotine, but other side effects come in unexpected forms. Dehydration is a risk since vape juice has propylene glycol which can absorb or retain water. Also, vaping juice has solvents to help flavorings dissolve into them. When heated, some of the solvents used turn into carbonyls. A 2014 study showed that these carbonyls included formaldehyde and other compounds that are known or suspected of causing cancer. Another risk is that our body is more suspectable to germs and bacteria because of vaping. Laura Crotty Alexander works at the Veterans Administration San Diego Healthcare System. She did a study with mice that showed when Staphylococcus aureus (a bacteria that can cause pneumonia) was exposed to vape fumes they created an extra layer of biofilm. This, when paired with the weakened lungs, make it harder for humans to fight off sickness passed on by the air and it further impairs our lungs. Other studies have also shown that even non-nicotine vaping juice harm the lungs.

So is vaping worse than smoking cigarettes or dipping? I would still stay that while vaping is a better alternative to these things, it is not without risk. There seems to be confusion that vaping is completely harmless and worry-free, when that is simply not the case. I'm not trying to be overdramatic or to scare people away from vaping, but it's not risk-free or harmless and I have encountered many people with that mindset when talking about vaping. If you are not already addicted to nicotine, don't start vaping. Vaping should also not be used as a method to quit smoking. If you really want to quit, seek the support of trusted loved ones and try any of the FDA approved ways to quit.

Ultimately, the decision is yours, no matter the risk. However, I believe it is important to let people know that vaping is far from harmless. If you're intent on vaping, I'd recommend doing your research to find out if it's worth it to you. Weigh your options and do your research. I hope, in the future, more people become more aware of the risks associated with vaping. I'm not trying to promote the idea that vapes are "of the devil!" They have their upsides: they smell nice, they don't have the harmful second-hand smoke side effects, and they don't pollute the air we all breathe. Just be aware of the consequences of what vaping can do to you.

To read more about this, go to https://student.societyforscience.org/article/vaping-may-harm-lungs