4 Reasons Why You Should Go to an Open Mic

4 Reasons Why You Should Go to an Open Mic 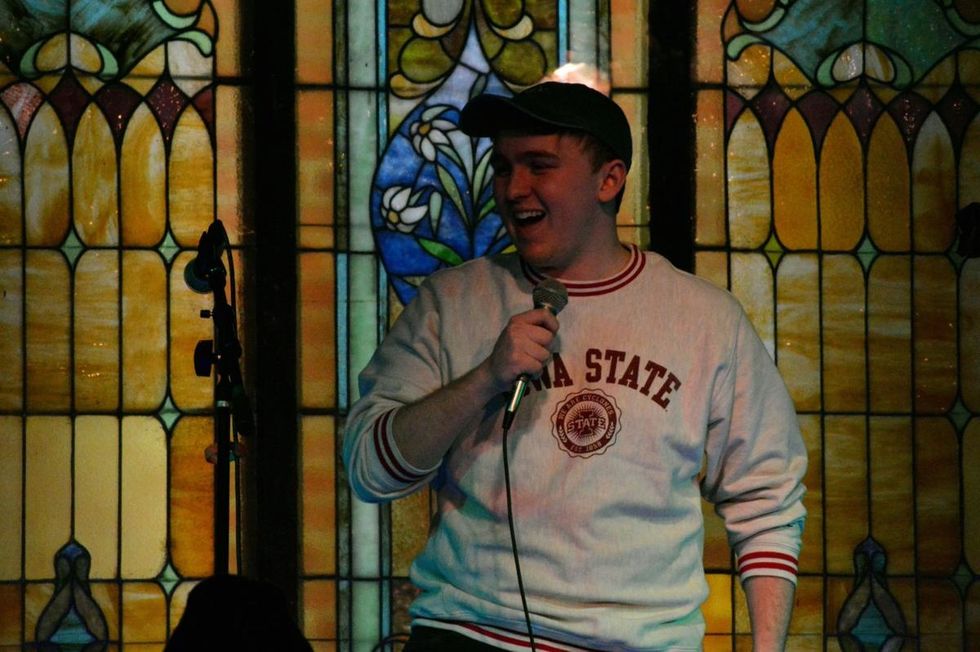 If you're anything like me, you're slowly bingeing your way through every available streaming platform known to man while we wait out this horrible virus. This pandemic won't last forever, and when it finally ends, the last place you'll want to be on a Friday night is at home on the couch. Bars, restaurants, concerts, and movie theaters will be overflowing with socially-starved people making up for lost time. What if there was an option that combined all four? It has the excitement of going to the bar mixed with the entertainment of going to the movies or a concert mixed with a bit of reality tv for good measures. I'm talking, of course, about open mics (you read the title)! Being an amateur comedian, I spend three or four nights a week over the last year hanging around open mics, and they're without a doubt one of the best (and cheapest) experiences out there!

First and most importantly, going out to an open mic helps support local art like none other. Open mics are diverse and can range from stand-up comics, poets, musicians, and choreographers, all of whom need all the help they can get. The more they perform, the more they can improve their craft, and the more that you come out and support their efforts, the more your communities' art scenes will thrive! Who knows, maybe you'll even see the next Dave Chappelle before he/she is famous?

It's the 21st century, and for a lot of us, it's pretty hard to find a reason to put down the phone, close the computer, or turn off the tv. We're so used to having access to unlimited content online that we forget that there's live entertainment every night. Open mics are almost always free, save for the drinks you get at the bar, and have contained hours of entertainment. The best part about it is, you never really know what you'll get! A somewhat awkward-looking boy, clutching a worn acoustic guitar, may leave you speechless with an almost flawless rendition of a melancholy John Mayer song. A girl with a bland sweater, and personality that's anything but, may cause you to spill your white claw laughing so hard over her Joe Biden impression. It's the ultimate lesson in "don't judge a book by its cover," plus you'll have amazing stories and inside jokes to talk about with your friends for years to come!

Open mics aren't just for enjoying up and coming local artists; they're also incredible opportunities to people watch. It takes a lot of confidence for a performer to take the stage in front of a room full of drunken strangers, and anyone who attempts it deserves admiration, but not everyone is as prepared as they should be. Open mics encapsulate all of the reasons why we love the first few weeks of American Idol. There are your ordinary drunk people who, with a bit of Irish courage, decide to take the stage with no preparation and treat the open mic as if it were a karaoke (they sometimes get more laughs than I do). You have the first time comics who, despite their best efforts, fail to get even a polite chuckle. Then, last but not least, the people with a few screws loose who decided that this is their moment to rant about their lives to total strangers. Like the early seasons of the office, it's so cringey that you can't turn away.

I still remember the first open mic I ever went to: It was about a year ago, and my friend and I were incredibly bored on a Tuesday night, that is until my buddy suggested we check out our college's open mic. I was hesitant at first, but I finally agreed, and we walked over together. We were there for two hours, and we stayed entertained throughout. Seeing my classmates perform was inspiring to me; it made my silly dream of doing stand up seem much more attainable. After that first night, I got hooked, and after a year of hitting open mics, I achieved my goal of winning my college's Stand-up Comedy Contest! Open mics have given me a platform where I can express myself while also interacting and befriending other artists with similar interests and passions.

I hope that you all try something new and check out a local open mic! At the very least, you'll have a fun night out with friends, but for a few of you, it may even give you the confidence to try your hand at it yourself and discover why I can't stop going to performing!