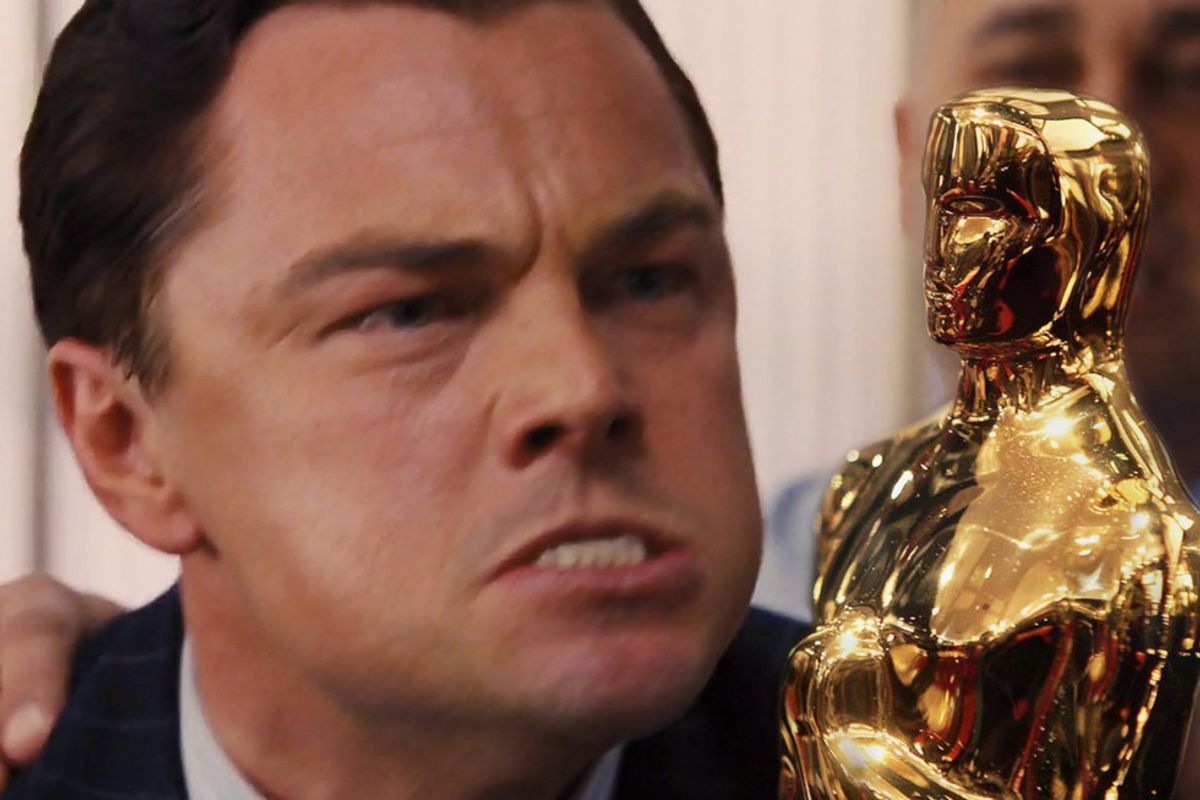 Throughout his acting career, Leonardo DiCaprio has received six Academy Award nominations. This year, he received his sixth Academy Award nomination for his stellar performance in the film, "The Revenant." It is no secret that DiCaprio is an amazing actor, which is why many of his fans and colleagues wonder why he has been so unlucky at the Academy Awards. I mean, seriously! Just take a look at the following movie titles that, before this year, he was nominated for the "Best Actor In A Leading Role" category: "The Aviator" (2004), "Blood Diamond" (2006), and "The Wolf Of Wall Street" (2013). Leo has also received a nomination for the "Best Actor In A Supporting Role" category for his performance in the film, "What's Eating Gilbert Grape" (1994); and, as a producer, he received a second nomination for his film, "The Wolf Of Wall Street," for the "Best Motion Picture Of The Year" category. Although DiCaprio has been unsuccessful at the Academy Awards thus far, hopefully this is Leo's year to shine. This year, DiCaprio's competition for the "Best Actor In A Leading Role" category are: Bryan Cranston ("Trumbo"), Michael Fassbender ("Steve Jobs"), Eddie Redmayne ("The Danish Girl"), and Matt Damon ("The Martian"). Although each of these nominated actors had stellar performances in their respective films (I mean, that's why they were nominated in the first place, right?), DiCaprio's performance in "The Revenant" is definitely amazing enough to get him his first "W" at the 88th Academy Awards ceremony on February 28th, 2016. Whether he wins or loses, however, you can count on the internet exploding with memes and gifs that either depict how elated DiCaprio is to win his first Oscar, or how devastated he is to lose for the sixth time in his acting career. Until then, here are 31 hilarious Oscar-themed Leonardo DiCaprio memes (which includes one gif):

1. So many people have joked about Leo's Oscar deprived career.

2. People have created countless parodies regarding his luck at the Oscars such as this one:

3. The most popular memes satirize how Leo lost the "Best Actor In A Leading Role" award to one of his co-stars in "The Wolf Of Wall Street," Matthew McConaughey, but it was for a totally different movie ("Dallas Buyers Club"). Just take a look at this meme:

7. And you wonder why DiCaprio refuses to use any form of social media:

8. Some of the memes are actually pretty clever:

9. There are even gifs that make fun of Leo's misfortune. You mad, Leo?

10. This just makes you feel bad for the guy:

14. There are also hundreds of memes that narrate what was going on in Leo's head just before the winner of his category was announced, and after he realized that he was not the winner.

15. God is definitely keeping him from winning an Oscar because this dude is a phenomenal actor.

16. Another example of the countless "Wolf Of Wall Street" parodies:

18. Sad, but true. It seems like the Academy hates Leo for some reason, so I guess Steve Harvey is Leo's only hope.

23. When it comes to Leonardo at the Oscars, the Soup Nazi doubles as the Oscar Nazi.

24. If there was a line, this definitely crossed it:

31. If this actually happens, he should just throw in the towel now, and just be happy with his Golden Globe awards: