22 Times Taylor Swift Was Too Sexy For Her Shade
Odyssey

22 Times Taylor Swift Was Too Sexy For Her Shade

Oh, look what you made her do. 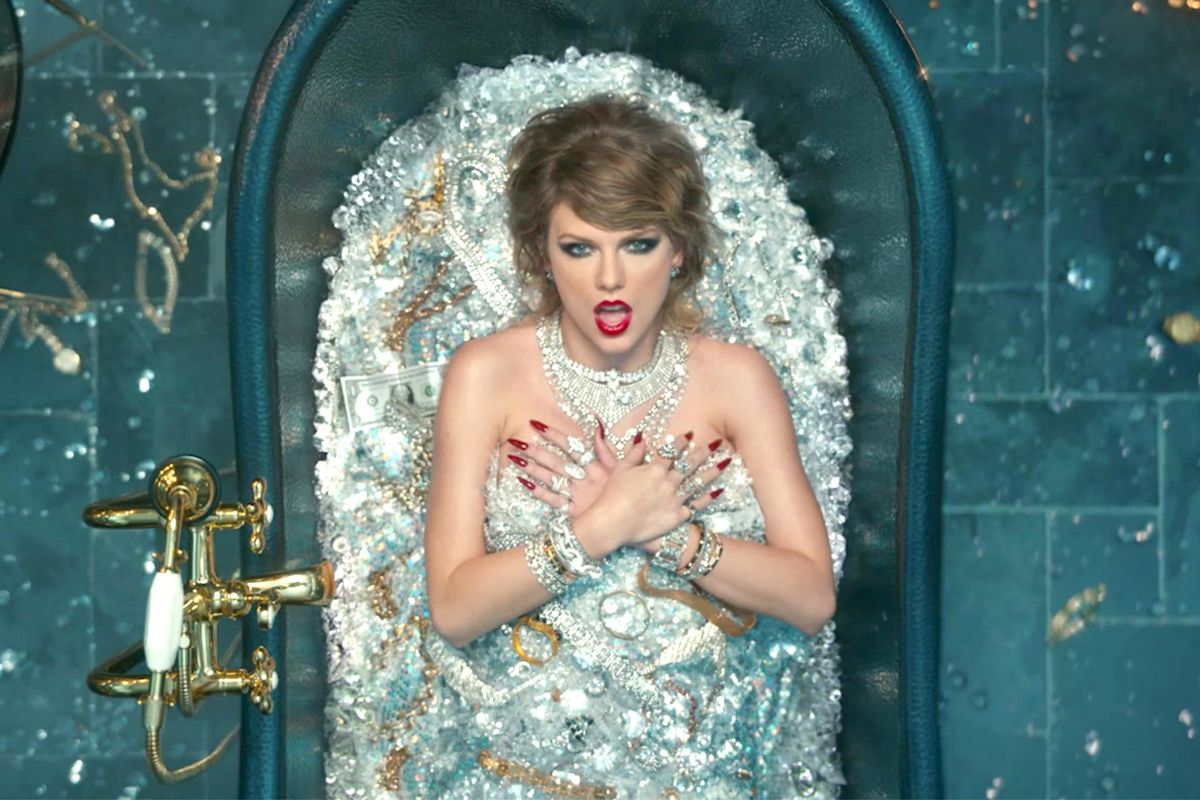 After three years of being quiet on the music scene, Taylor Swift came back bigger than ever within the past few weeks. With gifs of parts of snakes, a single and album announcement, and a music video, Taylor is back with a bang. Her latest single "Look What You Made Me Do" has already broken over 13 records on the charts and streaming sites like Youtube and Vevo.

Her music video was premiered at the MTV VMA Awards on Sunday, August 27, 2017. Within the video are various symbolic references and "easter eggs" that Swifties and many more across the world found. Did you spot all of these?

1. The graveyard we are introduced to in the opening scene is shaped as her initials "TS."

2. One of the graves in the background is marked for "Nils Sioberg."

"Nils Sioberg" was the alias Taylor used for writing the EDM song, "This Is What You Came For."

4. In the bathtub with Taylor is her symbolic $1.

The $1 was photoshopped into the bathtub after Taylor won her sexual assault trial. She had only sued her assaulter for $1. This is the only shot you see the dollar in.

This is another symbol from Taylor's trial.

6. In Taylor's snake kingdom, the famous line "Et tu Brute?" is on the columns and the throne.

This famous line is from Shakespeare's play, "Julius Caesar." Caesar says this to Brutus, his one friend, right before Brutus stabs him. The line represents betrayal which relates to Taylor's feelings of being betrayed by someone she thought she could trust.

7. One of the snakes serves Taylor tea.

8. There are 12 snakes surrounding Taylor, making her the 13th snake.

9. Taylor is crashing a car while holding a Grammy.

There is speculation from Swifties on Twitter and Tumblr that the car represents a song lyric from Taylor's album, "Red," which they believe should have won Album of the Year.

10. The paparazzi in this scene are some of Taylor's dancers from the 1989 World Tour.

11. In the passenger seat of the car is a cheetah wearing the number 13.

The old Taylor Swift might be dead, but the new Taylor Swift still has a love for cats and the lucky number 13.

12. In the next scene, Taylor and her infamous squad are robbing a streaming company.

When Taylor had taken her music off of streaming services, people accused her of not standing up for smaller artists but being a money greedy celebrity.

13. Did you spot her backup dancers again?

In this quick shot, you see Taylor's backup dancers once again but this time appearing as workers at the streaming company.

14. Taylor is shown as the leader of a "perfect squad."

Taylor never once labeled her friend group as a "squad." This term was used by others. Taylor then faced criticism that she was only friends with girls who looked exactly the same. Taylor used this narrative in the video by making it look as though she has been programming mannequins to be an army for her.

15. On the screens behind her, you can spot her cat, Detective Olivia Benson.

16. Taylor lays next to the remains of "squad members" as they are the ones who betrayed her.

Of course, like many people, Taylor has lost friends and has felt betrayed by some. Here she is laying next to the destroyed mannequins, the ones who betrayed their leader.

17. The message behind Taylor's boyfriend mansion is more than just a shirt.

Here we see the infamous "I <3 TS" shirts that Taylor's ex boyfriend, Tom Hiddleston, wore during Taylor's 4th of July Party of 2016. All eight men stand wearing her shirt as they represent Taylor's famous eight ex boyfriends. People have said that Taylor only uses her exes for promotion when she has a new song and album coming. There have even been jokes that Taylor has them all locked up in a mansion.

18. One of her close friends, Todrick Hall, makes an appearance.

19. ALL OF THE OLD TAYLOR SWIFTS TRYING TO CLIMB TO THE TOP BUT FAILED.

How many Taylor Swifts do you recognize?

20. The phone Taylor uses is the same kind from the "Our Song" music video.

21. There is a new Junior Jewels tee.

This tee is slightly different from the original that Taylor wore in her "You Belong With Me" video as now the names of her closest friends that stuck with her through everything are scattered on the shirt.

22. There are a total of 15 Taylor Swifts standing in front at the end of the video.

These 15 versions of Taylor are used for Taylor to make fun of herself using the means comments Taylor has gotten over the years. They also represent the number of tracks on "Reputation."

Did you notice any other hidden gems in the video?

"Reputation" is available on November 10, 2017 and you are able to preorder it now. You can also watch the music video for "Look What You Made Me Do" here: