Did the fateful events of the year cause an obstacle of the present or a forewarning of the future? 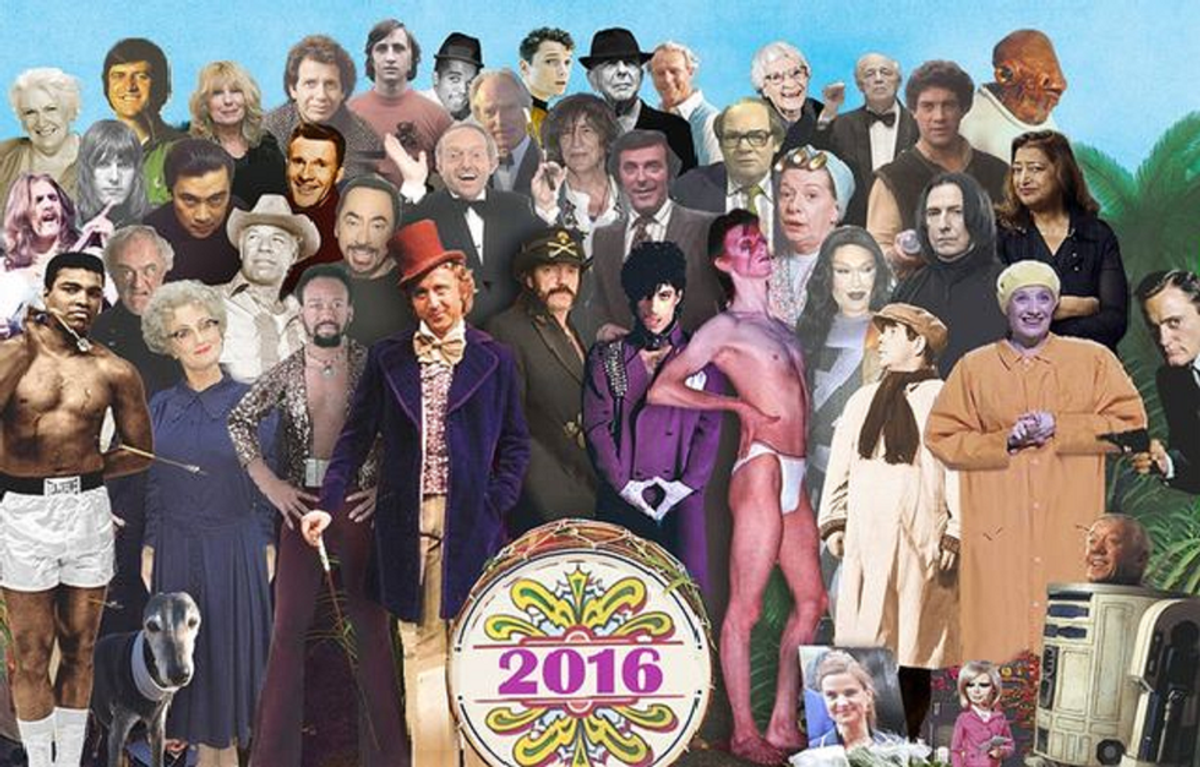 Toward the end of the year there was a big push for 2016 "to just end", whether it be through hashtags or a caption after the newest celebrity death. And I really can't blame people. Several aspects of the year didn't go well, whether it be politically (Brexit, Trump) or in pop culture (celebrity deaths.) However, as we dive into the new year, should we have wanted 2016 "to just end?", or should we have cherished 2016 as we knew it would just be worse?

Yes, several famous celebrities passed away, all throughout the year, whether it be all the way in January (David Bowie) or that snowball effect at the end (George Michael, Carrie Fisher, Debbie Reynolds.) Interestingly enough, though, several of these goodbyes had a shocking about of closure. There were not one but two great albums from artists David Bowie and Leonard Cohen days before they died. Even though George Michael didn't release an album, he was surprisingly in the pop culture discussion as well, being talked about in Deadpool, Keanu, and even a name-drop in La La Land, which was especially eerie to me because I was watching that movie while the news was going out of his passing. Anton Yelchin played a heroic role in one of the indie hits this year, Green Room. Then there's Carrie Fisher, who happened to be in a Star Wars movie for the first time in 32 years last year, and her performance will be in Episode XIII. Just as well, Rogue One: A Star Wars Story *spoiler alert* ends with Young CGI Leia, something eerie for people who saw the movie before her death but probably eerier for people who saw the movie after her death.

Then there's Brexit and Trump. These two events have a few obvious things in common: they're political, they signal rising nationalism in the respective countries, etc. However, there is one similarity they share that is acknowledged but not necessarily discussed; they will both be administered in this year, 2017. Of course Trump will be inaugurated this month, but while the Brexit vote did occur last year, Britain has not officially left the European Union yet. So while it seemed like these countries seemed to be aimless politically in 2016, they were still under, respectively, an Obama administration and the European Union.

But that's not all with politics. There was another populist candidate that took this country by storm: Bernie Sanders. His call for social and economic justice for the 99% inspired much of the country to be re-involved with the political process, and his political revolution is already in effect, with minimum wage being raised in states like Maine and recreational marijuana being legalized in some states (including Maine) to help end the so-called "War On Drugs." And although Sanders did lose in the primary, there is now a push for the Democratic Party for Populism and Democratic Socialism, and a potential Elizabeth Warren presidential run in 2020 might actually be the better long-term option for the party and the country.

And while the deaths of these celebrities were tough for us and especially the friends and family of those lost, we were able to remember and pay tribute to them all. This year, these stars will fade from our memories, but, in 2016, we gave these stars the spotlight. We were able to reflect on all the great things they have done. As a millennial, I noticed that this spotlight actually introduced my generation to artists like David Bowie and Prince, artists that were not given that spotlight in any other time in our lives up to that point. And while 2016 seemed bad, this year we will not only will we live in Trump's America, but we will also be without these people, in every sense of the word.

As was customary at family gatherings, on Christmas I talked about my studying in Rome this upcoming semester. This particular time I was talking to my cousin, Matt, and he said it was a great time to take a train and visit all the countries in Europe because, with growing nationalism in Europe, that freedom might not be along for much longer. So, with an uncertain future ahead of us, we have to do what we want now. Be thankful for our heroes while they're still here, make the most of the privileges we are given, and take that train ride.

Madison Franz
The Narrative
1111271
Photo by Brooke Cagle on Unsplash

Madison Franz
The Narrative
651447
Photo by Manny Moreno on Unsplash