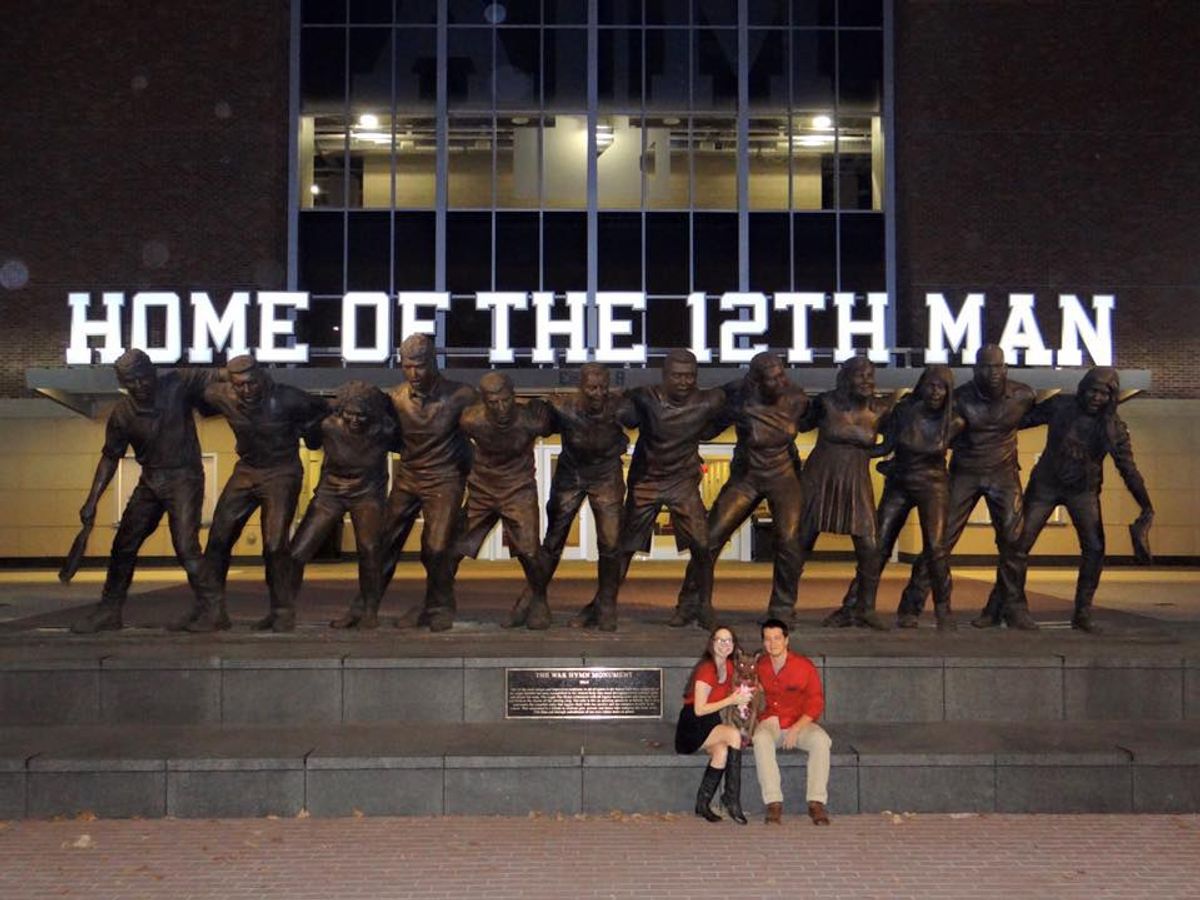 I have wanted to attend Texas A&M since I was in middle school. I am now going into my senior year at one of the greatest universities in the country.

Texas A&M has allowed me to meet some great people and given me some awesome opportunities. Going into my senior year I have been reflecting on how truly lucky I am to be an Aggie. So, here are 17 Reasons We Love Texas A&M.

Fish camp, Howdy Camp, T-Camp are all great experience and begin your journey as an Aggie. You meet people that stay in your life and some that you smile at when you see on campus. I learned about all the traditions that A&M holds close to their heart and how these traditions came to be. You might not have loved the experience but looking back I am so glad I went.


2. "What organizations are you involved in?"

Texas A&M has over 1,000 organizations so there is bound to be something you want to do.


We have all taken the picture or at least smiled when we have gone by.


Midnight yell is one of the many reasons football takes up our whole weekend.

As seen above, from Squirrel Attack 2014, some are nice and some aren't. If you haven't wondered how fluffy their tails are you're probably lying to yourself. The fat creatures are just too cute.

Silver taps is one of the more solemn traditions we have. The experience is one you can only explain by going.

7. Having a load of laundry dedicated to maroon

Maroon is never lacking in our clothes hamper. We have branched out a little with our cute colored frockets, but maroon is the OG.

It may cost a fortune but we all know its worth it. It is the most outward appearance that you're an Aggie and we where it like the honor it is.

9. Having our own language.

Whoop, gig'em, redass, and howdy are all words that are common to us. If you're in the Corps of Cadets your vocabulary is more vast than your non-reg counter parts.

10. Holding the doors open for each other

Holding doors open for each other is a common courtesy.

Standing for 3 hours with over 1000 of our closets friends through heat, cold, and rain.

12. Being a former student

We don't have ex's, only current and former students.

The core values are what gives Texas A&M the culture we have.

Having a majestic First Lady of Aggieland is almost the best part of going to Texas A&M.

The Aggie band makes sure we never lose a halftime show. The "Oos" and "Ahs" are always present at an Aggie Football game even if it isn't from the team.

We have all benefited from a little uplifting hope by putting a penny on Sully.

Howdy! My name is Cassandra, I’m a Civil Engineering major from Ft. Worth but most importantly, I’m the loudest and proudest member of the Fightin’ Texas Aggie Class of 2017! Ay WHOOP! I thought it would be redass to end on my class, good thing I'm not 88'.

Above all, I am so glad to be around people who embody the Aggie Spirit. My last year (and extra semester) will be filled with memories that I couldn't have at any other school. We might be different but once an Aggie always an Aggie.